‘Buddy’ Scores 28 In Loss To Ayton And Suns 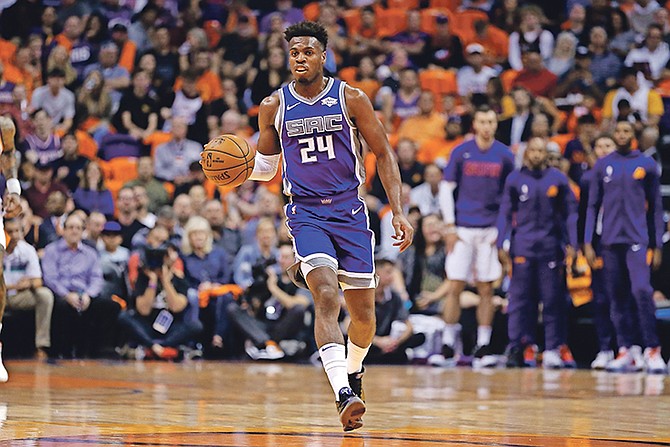 Sacramento Kings guard Buddy Hield dribbles in the first half against the Phoenix Suns on Wednesday night in Phoenix. (AP Photo/Rick Scuteri)

DEANDRE Ayton and the Phoenix Suns got the edge in their first matchup of the season against Buddy Hield and the Sacramento Kings.

The Suns took a 124-95 win over the Kings Wednesday night at the Talking Stick Resort Arena, but Hield rolled his left ankle late in the game when he stepped on Ayton’s foot on a drive to the basket. He left the game with just over four minutes remaining and did not return.

Kings coach Luke Walton will get an update from the training staff on Hield’s availability as the team prepares to host the Portland Trailblazers tonight at the Golden 1 Center in Sacramento, California.

On the court, both players posted impressive numbers in their season debut.

The second-year centre said a commitment to the defensive end of the floor has been a priority for new head coach Monty Williams.

“I got four? Oh wow. I’m blocking shots. Coach Monty is big on defending, it’s right there in our locker room. When you watch film and you’re the biggest dude on the court and you’re not protecting the rim, we got a problem,” Ayton said. “I’m emphasising that in my game now, really giving my all and risking it, whether it’s a hard foul or not. I’ve got five more.”

Hield led the Kings with a game high 28 points. He shot 10-19 from the field, including 6-12 from three-point range. He scored 22 in the first half. His hot shooting early led the Kings to a five-point lead at halftime but the Suns rallied for an 86-76 advantage headed into the fourth.

The Kings shot just 28 per cent from the field and had 18 turnovers in the second half.

“They played hard, especially the way they attacked the offensive glass. Ayton, we couldn’t keep him off the glass, he was a monster tonight,” Hield said.

“Guys you may not expect to make shots made shots and they just got hot. We couldn’t get in a rhythm after that. When they had other guys making shots it had us wondering ‘well who do you help off now?’ It was just one of those nights for sure.”

“When Fox went out we didn’t have anybody to push the ball back at them, that’s when we are at our best, but we can’t make excuses, we are professionals, we have to learn how to adjust. They played harder than us, we just have to rebound the ball, if we get rebounds then we can push the ball and be at our best,” Hield said.

“First game, everyone was kind of jittery. I don’t think it was a system I think guys were doing their own thing, different flex. We didnt really run all our stuff, we need to do a better job getting to our stuff and playing in attack mode all the time. We were a bit too stagnant and we all weren’t confident today.”

Hield was drafted No.6 overall in the 2016 NBA Draft and Ayton was the No.1 overall selection in the 2018 NBA Draft. They became the first Bahamians drafted in the NBA lottery (top 12 selections), since Mychal Thompson in 1977.

In the head-to-head matchup last season, Hield and the Kings held a 3-1 advantage.

In game one, Hield scored 20 points in just 18 minutes, while Deandre Ayton had 10 points and nine rebounds in the Kings’ 122-105 win at Talking Stick.

In game two, the Suns evened the season series with a 115-111 win, also at Talking Stick. Ayton finished with 17 points and 12 rebounds while Hield had 16 points, four rebounds and shoot 3-5 from three-point range.

The third matchup went to the Kings as the teams continued to trend in opposite directions. Hield finished with 18 points, six rebounds and made three three-pointers in his team’s 117-104 win at the Golden 1 Center. Ayton finished with 16 points, nine rebounds and shot 8-10 from the field.

It was a game of milestones for both Hield and Ayton in their fourth and final head-to-head matchup of the 2018-19 NBA regular season.

Hield set the Kings’ single-season three-point field goals record in his team’s 112-103 win while Ayton tied a Suns’ rookie record with his 37th double double of the season with 19 points and 11 rebounds.

Thompson played from 1978-1991, Ian Lockhart suited up in a single game for the Suns in 1990 and Dexter Cambridge played one season for the Dallas Mavericks in the 1992-1993 season.

Canadian-born Rick Fox played 13 seasons with the Celtics and Lakers from 1991-2004 and played against Cambridge twice during the aforementioned 92-93 season.