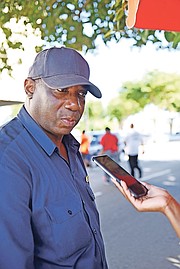 Gregory, who branded the BPL increase as a vicious move meant to cripple the poor. 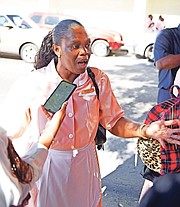 Bahamas Power and Light customers yesterday criticised the government’s decision to increase light bills through its rate reduction bond, which will allow for additional charges to be added to customer’s monthly bills starting 2020.

The new Electricity Rate Reduction Bond Bill 2019, which was passed in the House of Assembly yesterday, requires every BPL customer by law to pay the rate reduction bond fee. According to Minister of Works Desmond Bannister, customers should expect to see an additional $20 to $30 increase in their electricity bills for 10 months beginning in 2020.

Many frustrated residents feel it is unfair for BPL to increase light bills given that the cost of living is already too high.

“It’s ridiculous considering the government wouldn’t raise minimum wage. If we don’t get a raise in salary, how they expect for us to pay them? We can’t pay the bills we have for them right now. So, how are we going to pay an additional $20 to $30,” said one resident, who wanted to remain anonymous.

One woman, Molinda Smith, said: “We don’t have it. Where I work, we haven’t had a salary increase for years so if BPL want to increase, we wouldn’t have the money to do so. How BPL feel about that if you don’t have the money? The cost of living is already high here and I think if they put this increase on us (added) to VAT, I think we will go into a recession.”

Meanwhile, another BPL customer branded the utility provider’s bill increase as a vicious move meant to further cripple the poor.

“I think that’s a vicious attitude. I know that the poor has to be taxed for things to get done, but the rich supposed to be taxed even more. The poor people ain’t hardly making nothing now to pay the bills..so they need to pay the people more,” said the man, who only gave his first name as Gregory.

Anthony Petit added: “We all need to get together as a nation collectively to take care of our bills, but right now I don’t think it’s the right time and we’re paying a lot as it is. You have a lot of people struggling to make ends meet right now and for their electricity to go up $20 or $30, I think that’s overdoing it. Maybe (the government) needs to make a pay cut.” 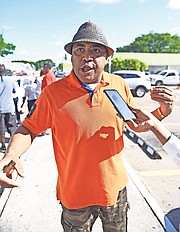 Shean Cartwright said if he has to pay more for his light bill, he expects the power to be on. Photos: Shawn Hanna/Tribune Staff

The issuance of the bonds, Mr Bannister has said, will be used to refinance BPL’s $321m debt and to pay for phase two of the new Wartsila power plant and manage other liabilities.

But, some consumers are arguing that the public should not have to pay additional charges to BPL to decrease its debt, which some claim is a result of mismanagement.

“I’m paying my bills every month so them having to pay the debt shouldn’t have to concern me. I don’t agree with it, but they gone still tax us regardless and the sad thing is plenty people ain’t working. These some serious times we in,” said one customer who did not want to be named.

Meanwhile, others are saying they don’t mind paying the extra charges if it means BPL could efficiently provide the services required by its paying customers.

One of them is Shean Cartwright.

“Anything to make this Bahama land a better country, I will do. So, if increasing my light bill is gonna make my life better and gone make my light be on more efficiently, then I don’t have an issue with that. But, if I gotta go home when I’m paying my $200 or $300 for whatever for light bill, I expect it to be on,” he added.

Dr Donovan Moxey, the state-owned utility’s chairman, promised earlier this month that the proposed rate reduction bond issue will ultimately result in “better outcomes” for all Bahamian households and businesses even though the “structure” of electricity bills will change.

These extortionist rate increase bonds are going to leave many Bahamians without an affordable supply of electricity. Our country as viewed at night by satellites orbiting high above the earth is going to look like the darkest parts of North Korea at night.