Dames Confirms Claims Of Mistreatment Will Not Be Brushed Aside 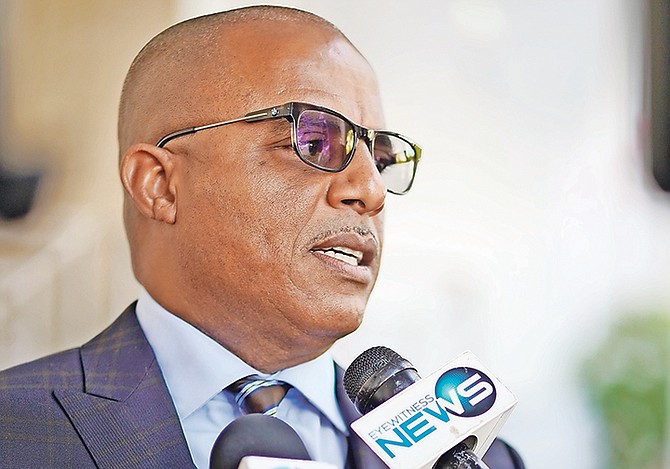 NATIONAL Security Minister Marvin Dames suggested yesterday that his ministry would not brush allegations of mistreatment against Haitian migrants in the wake of Hurricane Dorian aside.

His comments to reporters came days after an international watchdog raised concerns with the repatriation of Haitian migrants to their home country and alleged abuse before they were deported at the hands of officers. Mr Dames said law enforcement agencies do not ignore complaints of this nature, but allegations will be investigated where warranted to determine if they are legitimate.

“If you have a concern or a complaint, there is a channel by which that complaint could be directed and investigated...we’ll always have concerns when there are allegations against our law enforcement officers,” Mr Dames said.

“We don’t brush any complaints aside. Anything that’s investigated, and we determine whether there is a validity or otherwise.”

In a statement released last week, the International Organisation for Migration said it has monitored the deportation of some 340 Haitian migrants from the Bahamas. And, in monitoring the issue, IOM’s Chief of Mission in Haiti Giuseppe Loprete told The Tribune that on the second and third rounds of deportation post-Hurricane Dorian, his team had interviewed 150 persons, some of whom complained about being abused.

Mr Loprete also told Eyewitness News earlier that allegations of sexual assault have been reported to Haitian authorities and the Bahamas mission.

He also alleged that migrants who were processed last week displayed signs of physical abuse.

Responding to these claims highlighted, Immigration Minister Elsworth Johnson told The Tribune on Monday that officials will investigate any documented allegations of abuse towards Haitian migrants in the country.

However, Mr Johnson also noted that the government has frequently dealt with “false” accusations of abuse against migrants in the past.

But, if a claim is credible, Mr Johnson said a process has to be followed.

Of late, various local and international entities have denounced the repatriation of Haitian migrants from the Bahamas, citing the weeks of unrest, violent protests and political turmoil that have plagued Haiti.

In fact, last month, Haitian Chargé d’Affaires Dorval Darlier said the Minnis administration should consider suspending the repatriation of migrants “because of the political situation” in Haiti.

However, the government has remained firmed in its stance on the handling of illegal migration.

The Minnis administration has said that any person found in violation of the Bahamas Immigration Act will be dealt with according to statute laws.

Colony's Security Minister Comrade Marvin's suggestion that he ain't goin brush aside allegations of mistreatment against Haitian migrants in the wake of Hurricane Dorian
- must put the minister and his cleanup mop into isle six raised concerns against his policeman's in just last few months, yes, no ....

Mistreatment is in all kind of way in The Bahamas. It is not only about Haitians immigrants but also against the Society in general. We are all victims of an official apparently unstoppable Cleptocracy,where the government is mishandling the public pulse with absolutely lack of promised transparency,creating an estate of human disaster worst than all hurricane combine. Where the VAT-Money is going and how much the government is collecting DAILY? Where is the promised solution to the long standing PROBLEMS OF PUBLIC SAFETY ? What is going on ? One seldom see a Police Patrol Car,on the neighborhoods' like gettoes' streets. Excluded -disenfranchise youngsters are breaking cars,stealing their radios,batteries,tires,engaging illegal sex with minor girls and walking wild on the streets with immunity or lack of approach by the Police. Some neighborhoods look like "The Family Islands" . This is Christmas' time and the shining colorful lights of a Bahamian Police Patrol Car are not doing their job by making themselves visible,at least once or twice during the night. Police Stations look like hotels with lights off, late in the night, and "A Big Belly Police Officer" 😴 sleeping behind the counter unable to clearly verbalize their name IF they get to answer the Police Station's phone.This Based on confidential sources,the math is very clear regarding sufficient government resources or funds to solve nearly ALL PROBLEMS IN THE BAHAMAS. They have all the money !!. And instead solving the Country Problems,they solve their own Personal ones. It's very easy,let's DO THE MATH :

A) Native POPULATION according to last census 365,000. With an AVERAGE DAILY SPENDING of $3.00 EACH only for VAT. B) Foreign visitors 6 millions tourists/year(divided by 365 days in the whole year,it will be 16,438 TOURISTS/DAY) with AVERAGE DAILY SPENDING OF $20.00 EACH ONLY FOR VAT. according to inf. from .minister of tourism and by the way EACH TOURIST pay $20.00 for "Departure Tax" before they even put their feet in Bahamian Soil and start to spend MONEY 💰 TOURISTS USUALLY SPEND MORE MONEY THAN NATIVE PEOPLE. THEY COME TO HAVE FUN. C) ALL foreign boat pay VAT and IT'S A PUBLIC DOMAIN INFORMATION THAT THEY ADD MORE THAN ALL HOTELS' ROOM COMBINE IN THE ENTIRE COUNTRY. So hotel's rooms plus all fact in the entire archipelago clearly must double the MONEY of A) & B) combine plus departure tax. HENCE:

So let's say $3.00 Millions/day (MONEY DAILY COLLECTED ONLY FROM VAT) × 365 days In the whole year equal to $ 1.95 BILLION DOLLARS EVERY YEAR !!! That's beside THE MONEY FROM COSTOM PLUS ALL LOANS MOSTLY FROM BID WHICH ADDS MORE THAN DOUBLE ,THE BILION MENTIONED ABOVE.

Sticki-fingers,corrupt current newly elected government. They should be in jail and all the money turn back to national treasury and start a new beginning in The Bahamas.