Cougars Are The Champions 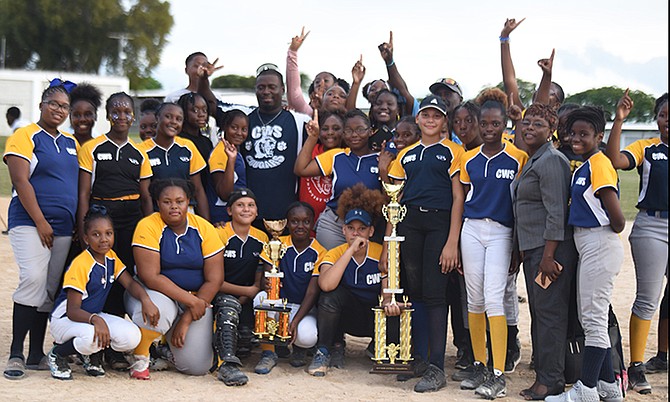 The Cougars roared past the Big Red Machine in game two of their best-of-three championship series yesterday at St Augustine’s College on the strength on a five-run third and a four-run fifth inning respectively to seal the deal.

“It feels great. We were just clicking on all cylinders today,” said Charles W Saunders’ head coach Brad Wood Jr, who was assisted by his father, Brad Sr. “I couldn’t have been more proud of these girls today and their performances.”

As they completed another perfect season at 8-0 to duplicate what they did last year, Wood Jr said he’s confident that with the success they are enjoying right now, they will definitely be coming back for a three-peat next year.

Tied at 1-1 going into the bottom of the third, sisters first sacker Brianna Knowles and winning pitcher Dorinda Knowles, along with third sacker Destiny Johnson, second sacker Samayai Nesbitt and centre fielder Reagan Turnquest came up with their first five runs to extend their lead to 6-1 as they batted around the clock.

The Cougars came back in the fourth and this time it was catcher Miranda Knowles joining her sisters Brianna and Dorinda Knowles and Destiny Johnson in scoring four consecutive runs to extend their lead to 10-2.

Charles W Saunders got their final run in the fifth for good measure as Knowles helped secure her second straight win on the mound by getting on base with a one-out walk and came home on an error.

The Cougars scored their first run in the first inning as shortstop Victoria Rolle led off with a walk and scored on an error.

It was another tough loss for the Big Red Machine, who was hoping to at least extend the series to a third and deciding game.

“If you don’t hit the ball, you can’t get on base,” said SAC’s head coach Rebecca Moss, who was assisted by Dawn Johnson.

“The girls from Charles Saunders played very well. They came out here and did what they had to do, so we have to give them credit.

“But my girls just didn’t hit like we were supposed to do, so we have to get ready for next season.”

The Big Red Machine rolled out to a quick 1-0 lead in the top of the first inning after second sacker Hadassa Newry drew a one-out walk and eventually came home on an error.

SAC didn’t score again until the fourth as losing pitcher Neikeisha Saunders got on with a lead-off walk and then came home on an error.

And in their final attempt to cut down the deficit, the Big Red Machine added their last run in the fifth as Newry got another lead-off walk and came home on a bases loaded walk by first sacker Cailyn Johnson. But Knowles struck out SAC’s final two batters, Teajah Johnson and Camyry Russell, to end the game as they rushed to the field to begin their celebrations.