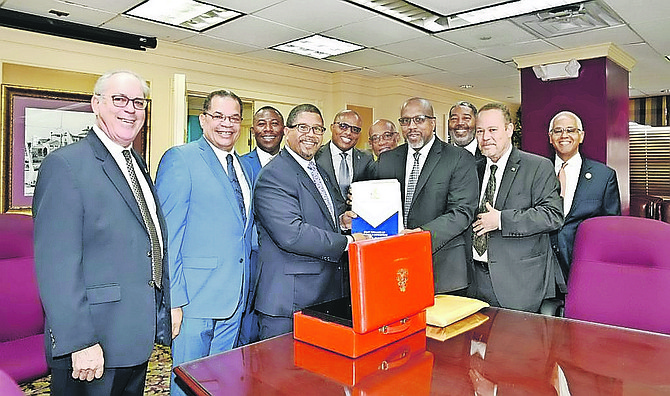 THE Minnis administration yesterday moved two resolutions to borrow a combined total of nearly $87m to defray expenditure and to fund the implementation of a street lighting-retrofitting project.

For state spending purposes, the government intends to borrow $72,387,438.

This comes as the minister praised the government’s fiscal responsibility, which saw healthy economic growth throughout 2018 buttressed by both revenue and expenditure performing lower than was previously expected.

The government was also able to slash its arrears over the last 10 months. So far a total of $126.9m was paid representing approximately 73.8 percent of the $172 million that was budgeted to settle during the 2018/19 budget year.

Mr Turnquest said: “All told, we project that the remaining two months of the fiscal year will perform positively. For the fiscal year as a whole, revenue is estimated to come in at about $2.4bn, some $238 million or nine percent lower than what was budgeted at the start of the fiscal year, largely on account of the new agreement with the gaming operators, the delayed implementation of the Revenue Enhancement Unit (REU), and the concessions granted to hotels and contractors in respect of the introduction of the higher rate of VAT.

“On the expenditure front, total outlays are projected to equal approximately $2.6 billion, which is also some nine percent or $259.1m below the amount initially budgeted for the year. Of this total, approximately $172.3 million is anticipated to be settled in respect of arrears, in line with the Budget projection.

“Based on these developments, we therefore anticipate the fiscal deficit to total some $229 in 2018/19, representing 1.8 percent of GDP; that will be broadly in line with the $237.6 million deficit projected in the last budget.”

He continued: “These developments clearly signal that this government is focused on more than merely talking about our plan to govern this country in the right manner, but also on action. Bringing our plans to fruition and realising the goals that we set forth for fiscal reform are critical priorities for us, as they underpin and, in time, will incubate our broader economic objectives of inclusive growth, a sustainable and resilient economy, and increased productivity.

“The outcome is a sustainable improvement in the well-being of all Bahamian citizens.”

Moving forward, the government has set specific targets for the 2019/2020 fiscal year.

“On the revenue front, we note that the revenue yield of our taxation system amounted to some 18.8 percent of GDP in 2018/19. A number of factors are expected to contribute to a further enhancement of that yield in 2019/20 and beyond.

“In 2019/20, the REU will be fully established, thus securing a significant increase in annual revenue and thereby underpinning a further boost in the revenue yield. Additionally, VAT will be reported at the 12 percent rate for a full year for the first time since the rate increase, and the new tax agreement with the gaming houses will be fully implemented. As such, we expect to secure higher receipts for the government accordingly.

“Moreover, the new Electronic Single Window at the Customs Department, with its enhanced features, is intended to secure more revenue via the Click2Clear platform, some of which will be realised in the upcoming fiscal year. All told, this should translate into an increase in the revenue yield of the tax system to the area of 19.8 percent of GDP in 2019/20 and beyond.

He told the House that the GFS deficit in the new fiscal year is estimated at $137 million, which translates to a deficit to GDP ratio of 1.0 percent.

He said such an outcome is fully compliant with the requirements of the Fiscal Responsibility Act, adding this would be the lowest annual fiscal deficit recorded in The Bahamas in 10 years and would mean the lowest fiscal deficit ratio in this country in over 17 years.