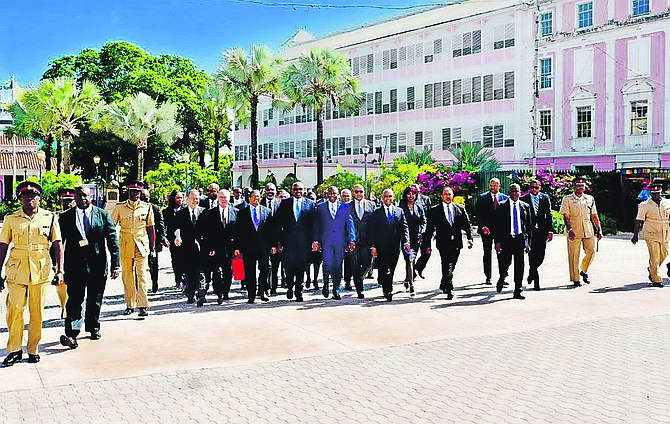 The Cabinet walking across Rawson Square to the House of Assembly

THE government will publish an annual list of every government contract awarded in a year under its proposed Public Procurement Bill 2019, Deputy Prime Minister and Minister of Finance Peter Turnquest said during his budget communication yesterday.

The government’s procurement system has long drawn the ire of transparency advocates and the business community. In the past, the US State Department has described the procurement process as opaque and susceptible to corruption. Mr Turnquest did not reveal when the new procurement bill will be tabled, though a draft version of the bill was submitted in 2018 to the Organisation of American States, which released the document.

“The new legislation will ensure that, going forward, the awarding and management of all contracts, vendors’ accounts and logistical arrangements for products and services in the country will be conducted in a transparent and fiscally responsible manner,” Mr Turnquest said.

“In respect to procurement reform, the electronic supplier registry has been open for over a year and businesses are registering in anticipation of the new legislative framework. Once this component is complete, all national procurement will be executed through the E-Procurement and Supplier Registry System. Thus, the procurement process will not only be more efficient, but more transparent, as every step of the process will be done in the open. All jobs will be advertised publicly, and every contract awarded will be published online and in the newspaper. Gone will be the days when Bahamians have to wait for the auditor general to uncover—sometimes years after the fact—that some mysterious individual or firm has received a million dollar contract while, in return, providing no discernible service or product.

“This government promised accountability and transparency, and the work under this component will move us far along in delivering on this promise.”

As part of its public financial management reform, the administration will replace the critical Financial Administration and Audit Act with the Public Financial Management Bill. The new bill would clarify the “roles and responsibilities of finance officers, reporting requirements, accountability expectations for government agencies, expanded budget disclosure requirements and the oversight of State-Owned Enterprises,” Mr Turnquest said.

“Very importantly, this bill will impose specific criminal penalties for those that breach the public trust and who cannot account for their actions in the management of public funds. This bill is expected to be ready for public consultation in the coming months, with anticipation of its introduction in Parliament by the end of this calendar year,” he said.

The upcoming budget also includes a funding increase of nearly half a million dollars for the Department of the Auditor General, meant to increase the government’s pursuit of transparency, Mr Turnquest said.

“In this light, we have allocated approximately $3.2 million for the Department of the Auditor General this year, which represents an increase of nearly $0.5 million over the $2.8 million allocated in 2018/19.

“By equipping the Department of the Auditor General with more resources, they will now be able to acquire more sophisticated audit tools that allow it to fulfill its constitutional mandate as an independent auditor,” he said.

And what about a similar quarterly published list for grants and long term leases of Crown land showing for each property the ultimate beneficial holder, the location and its acreage?

And what about a similar quarterly published list for all of the properties being rented/leased by government showing for each property the ultimate beneficiary(ies) of the lease payments?

And I could think of dozens of other lists the Bahamian public would love (and should get) to see, e.g. quarterly updated lists of all contributors to the governing FNM party and/or its candidates/MPs showing the value of all amounts/assets directly or indirectly contributed for their benefit.

Come on KP, bring on a real era of transparency for all to see what's usually well hidden by government from the public's eyes. Minnis said it would be the people's time KP..... so come on, step up to the plate....there's plenty more we should all get to see!