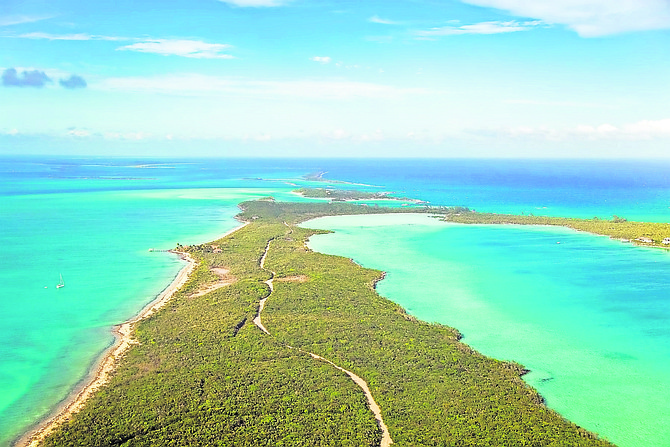 ATTORNEY General Carl Bethel led debate on a resolution in the Senate yesterday to bring closure to what he described as “one of the more sordid episodes in the modern history of (the) country”.

Mr Bethel was referring to a resolution for a land transfer that will enable the “serious development” of a proposed high level resort at Norman’s Cay in the Exumas. In the 1970s and 1980s, Norman’s Cay was notoriously known as the hub for a major multi-nation drug smuggling operation led by Carlos “Joe” Lehder, which the Attorney General described as a “traumatic period” for the nation.

Yesterday, Mr Bethel underscored the benefit this development will bring in “expunging” from history Lehder’s legacy at Norman Cay.

However, the government owns land in the middle of the proposed development - thus facilitating the need for a land swap. “This resolution is really of a tidying up nature,” Mr Bethel said. “What it does is it enables the seamless development of proposed high level resort at Norman’s Cay. The resolution in effect has two purposes.”

A resolution on this matter was brought to the House of Assembly on April 25. At the time, Tribune Business reported the efforts to develop a boutique resort on Norman’s Cay dates back to 2002.

The Tribune Business article notes the resolution calls for the treasurer to exchange 8.488 acres of land, divided into three parcels, along with the “right-of-way” over several roadways, with Exuma Resort Developers and its subsidiary, NC MacDuffs Ltd. In exchange, the Treasury will receive freehold title to some 8.617 acres of land, with all parcels involved in the swap located at Norman’s Cay’s southern end. The “superseding” Heads of Agreement entered into between the government and then-investors behind Exuma Resort Developers on April 23, 2008, requires parliamentary approval for any sale, lease or granting of easements/rights of way to the development.

The project, which has undergone several changes of investor and commercial terms, also committed under the former Christie administration that the Treasury would receive five percent “of the gross sales proceeds” from all lot and real estate sales by the developer as “a preferred return”.

The resolution’s tabling indicated that the long-proposed resort project, which would be located on some of the former Lehder properties seized by the government, may be back on again after stalling several times since it was first conceived, The Tribune Business noted in April.

The initial Heads of Agreement, signed in 2002, called for the development of a five-star Aman resort and capital investment of $25m, together with other amenities that included 40 luxury villas.

Carl Bethel should just move along with this FNM deal and stop his leader story. he should know no one can expunge history. but he needs to bring that up. Because he knows his FNM Government will make a bad deal for the Bahamas.

They know who will benefit I think it is the man who was giving doc a few dollars for business over the hill.

What is the comparative dollar value of the land being exchanged and what other concessions has the government given for this 'deal' to take place?