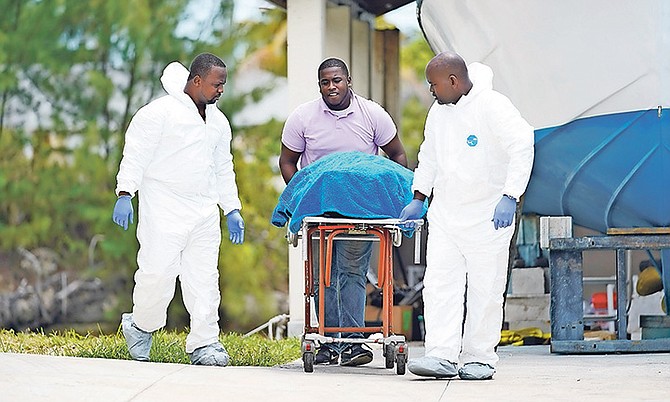 The body was taken out of the canal in eastern New Providence yesterday. Photo: Terrel W Carey Sr/Tribune Staff

A BRAZEN daylight robbery ended in tragedy yesterday morning after one of three alleged robbers drowned in an eastern New Providence canal.

According to Superintendent Shanta Knowles, shortly before 10am police received reports of a home invasion in Bay Lily, Seabreeze Estates.

At the scene, Supt Knowles said: “Upon the officers’ arrival they saw three men running from a home. Two of them [police] were able to capture and take into custody. [The] third jumped into the canal just at the rear of the house. Officers noticed he was swimming west in the canal towards Golf Course Boulevard, so we sent a patrol unit on [the other] side of the community.

“Officers noticed as he was swimming, he appeared to be in distress. They rendered assistance to him by jumping into the water. [They] brought him to shore, began to perform CPR until an ambulance came and then he was pronounced deceased.

“This matter is of course very active, and we will continue to investigate.”

Supt Knowles could not say whether the two men in custody and the deceased are known to police at this time.

She noted the deceased appeared to be between the ages of 25 and 30 but could not confirm the ages of the two men in custody.

Supt Knowles encouraged parents to enrol their children into positive activities this summer to avoid their participation in crimes and encouraged homeowners to safely secure their homes when away.

She said: “First of all we want to encourage parents to, especially during the summer months, ensure your children are involved in a positive activity so they don’t become involved in crime or [be] victims of crimes. We know that a lot of children will be on the streets and probably will be unattended and could be easily influenced by adults to commit crimes such as house break-ins.

“We want homeowners to take every precaution to secure their homes when they are not there. We encourage installing surveillance cameras, we encourage proper use of locks and security screens so their valuables can be protected when away from home.”

Supt Knowles said police were alerted quickly because of the watchful eyes of the people in the community and encouraged other neighbourhoods to form crime watch groups.

“[We encourage] you to be your brother’s keeper; this area has a very active crime watch and so we applaud the people for their crime watch. For watching their neighbour’s property,” she said.

“It is because of community policing or people involvement in community policing; we can have a success like this one here today. Where we can take two men into custody and probably question them on other matters related in this same area or [in other areas].”

Supt Knowles added: “It is important to get involved with your local police if you see information or if you see anything that can assist us give us a call. So, we can look into it and stamp out crime in our communities.”

The Dude shoulda learn how to swim!!

Lol! They should have thrown his friends in to save him; with the hope that they would drown too.

Sad news for all

I know a lady that teaches swimming lessons every summer. She is very affordable.

does she accept criminal pupils?

the matter is active???. but you just said he dead??

Death is no laughing matter, but your comment was just too hilarious. Carry on.

Dumb ass couldn't swim but wanna jump in a canal. Bye bye, the world is better off without you....

The correct caption should be Home Robber....NOT.....Home Raider