Stateside: Biden His Time - Will It Be Joe’S Final Glory? 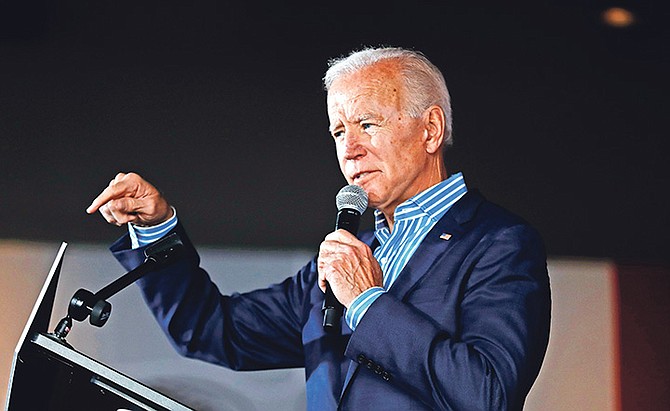 Joe Biden has launched his third bid for the presidency.

How many of the 20 Democrats currently running for president of the US can you name? If you can identify more than half of them, maybe you should consider throwing your hat in the ring as the latest challenger to James Holzhauer, the incumbent champion on TV’s 55-year-old quiz show Jeopardy. Holzhauer is approaching 20 straight victories and $1.5 million in winnings on ABC’s long-running early evening mainstay. He’s beginning to threaten the legendary success achieved only by Jeopardy icon Ken Jennings. A fan told the news media “I’m not ready for Holzhauer to lose. I love this winning streak.”

The latest Democrat to throw his hat in the ring in Washington has no such record of success. In fact, Joe Biden is a two-time loser in the American presidential primary sweepstakes. His first foray, in 1988, ended ignominiously when it was revealed he had plagiarised parts of a speech. And as has been widely recalled in recent weeks, Biden hardly covered himself in glory in his management in 1991 as Senate Judiciary Committee chair of the Clarence Thomas Supreme Court nomination hearings and Anita Hill’s sensational, salacious charges against Thomas.

Biden, a member of the US Senate since 1973 when tapped as Barack Obama’s running mate in 2008, had run earlier that same year against Obama for the Democratic presidential nomination. That bid also fizzled, perishing like a desiccated corn husk in the heat of the Iowa primary race. And after eight years as VP under Obama, Biden decided against running in 2016, emotionally crushed by the recent death of his eldest son.

Now he has launched a third bid for the presidency. Biden is familiar to US voters. He is still “Uncle Joe,” jocular, open and funny. He misspeaks occasionally. But perhaps more than any of the other Democratic contenders, Biden brings to the table strong blue-collar appeal and trade union affiliation, together with a stronger than might be expected appeal to African American voters. He offers the tantalizing possibility of flipping Michigan, Wisconsin and his native state, Pennsylvania, back to the Democratic column. That would likely be enough to push Donald Trump out of the White House.

Dispossessing Trump of the presidency is quickly emerging as the centrepiece of Biden’s fledgling campaign. While the other candidates tiptoe around Trump, impeachment and corruption in the White House, Biden has launched what amounts to a crusade against Trump.

In his first campaign video, Biden said the 2020 race would be a battle for America’s soul. If Trump loses next year, his tenure might be seen as “an aberrant moment in time”. Biden warned that if Trump is re-elected, “he will forever and fundamentally alter the character of this nation.”

Any observer still undecided about polarisation in current American politics can have few lingering doubts after reading that.

This is one of the busiest seasons in professional American sports. Everywhere you look, something that feels important is going on. And the big-time college sports of football and basketball are quiescent, so the pros have the TV screens and internet blogs to themselves.

The 2019 baseball season is now a month old and divisional races are starting to take shape. Big-spending giants like the Red Sox and Yankees are beginning to make moves out of early season slumps, and plucky challengers like the Brewers and Rays are still holding their own against growing threats from more established rivals.

Both the NFL and the NHL are into the second rounds of their long playoff grinds, with very different results so far. In the NBA, most favourites have advanced to produce fascinating, worthwhile matchups. With no LeBron James in the playoffs to tilt the playing field, Bucks-Celtics, 76ers-Raptors and Warriors-Rockets are all exciting and entertaining. The outcome of these early series is very much in doubt, and that makes a nice change from recent years.

In the NHL, many of the perennial title contestants of recent years have already been dispatched, so there is a fresh element in the extended NHL season too. Upstarts Carolina and Columbus in the East have already turned things upside down with their unexpected success, and they may not yet be finished with their upsets.

Horse racing is getting ready for the Kentucky Derby which will kick off its month of Triple Crown relevance on the national sporting scene. Golf is in the midst of its sequence of four major championships. Even American soccer is showing signs of sticking around on the national scene after several calamitous flameouts over the past several decades.

Speaking of soccer, sports fans should consider the Champions League, where the world’s best players are now competing for European club soccer’s biggest prize in the semifinals of this annual tournament. In one bracket, two titans that are among the world’s best exponents of the beautiful game collide. Barcelona opposes Liverpool. The decisive game of their home and away competition is Tuesday on TNT. If you admire the beauty and grace of soccer at its best, this match is definitely worth a watch or a recording. It starts at 3.00 pm. Barcelona won the first leg 3-0.

And then there’s the NFL. Are you happy with your team’s choices? Are you thinking more about Josh Rosen’s chances of lifting the Dolphins from an upcoming season of dispiriting mediocrity more than you are thinking about the Rays knocking off the baseball big boys in their division? Maybe you’re talking about Tyreek Hill, the brilliant Chiefs wide receiver whose latest domestic violence episode revelation may sideline him forever. No one in the NFL is playing any games for three more months, but few forget the NFL.

It’s all relative: How a high-speed life can change you

What do a high-profile pair of accomplished twins and Albert Einstein have in common? Quite a bit, as it turns out.

The American journal Science has just published the results of a 2015 experiment to validate part of Einstein’s special theory of relativity. In that theory, which was promulgated in 1905, Einstein postulated that someone moving at high velocity ages more slowly than someone on Earth. This became known as the twins paradox.

Four years ago, the American space agency NASA saw an opportunity to test the theory. Twins Mark and Scott Kelly were NASA astronauts, so the agency sent Scott up to the International Space Station while Mark remained on Earth. The idea was to monitor both and see what researchers found. In low space orbit, Scott was travelling at 17,500 miles per hour.

Mark, earthbound, was travelling significantly more slowly and in a different direction. Mark is married to former Arizona congresswoman Gabrielle Giffords, who was nearly killed in an assassination attempt at a Tucson supermarket in 2011. Mark is running for the US Senate from Arizona as a Democrat next year.

“I look younger than he does,” Scott told newspapers recently. “He’s busy running for office. His telomeres (linked to DNA and chromosomes) are going to be way worse than mine. I’m not worried. I’ll be on a beach in The Bahamas, and he’s hopefully going to be in the US Senate. He’s going to age much faster than me.”

But more seriously, NASA’s study did reveal that the human body (in this case, Scott’s) does go kind of haywire in the zero gravity of outer space. Scott’s immune system and body responded to his exit from and return to the earth’s atmosphere as if it were under attack. At the same time, though, tests showed that Scott’s telomeres did lengthen in space. That might indicate that space travel could extend the normal life expectancy for a human. But his telomeres shortened significantly upon re-entry and return to Earth.

So maybe Scott would live to 150 or beyond if he continued to travel in space. Only one thing: no return to Earth. Maybe Star Trek isn’t such a fantasy after all.

Why should we even care? U.S. Government does what it wants when it wants, rather like ours. Doesn't matter who is President. The power is in the hands of the mega rich congresspersons, senators and their crones. These days the President has to be pretty mega rich as well....