Emotional Interview With The Mother Of Stabbed Schoolboy: Why Did They Have To Take His Life? Why? 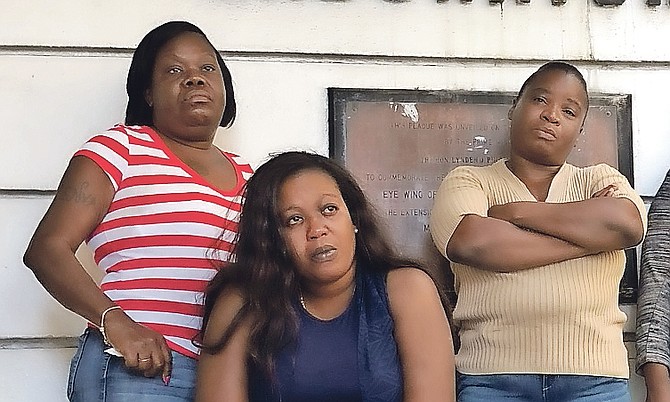 IF she could say anything to the two teenagers who conspired to fatally stab 15-year-old Perry Rolle Jr on Tuesday afternoon, his mother, Gladys Louis simply has one question, “Why?”.

“Tell me well, why did you hurt my son like that? Why did you take his life like that? Because my son didn’t have that in him, to take another person’s life,” the 38-year-old mother told The Tribune yesterday.

In an emotional interview, Ms Louis discussed the harrowing experience of losing her firstborn and only son to violence — which she described as the culmination of serious bullying that has occurred throughout this past school year.

Rolle, a ninth-grade student at TA Thompson Junior High School, was fatally stabbed after school near the premises of TG Glover Primary School by a 16-year-old student of the neighbouring CC Sweeting High School.

Education Minister Jeff Lloyd said two teenagers, one of whom was in possession of a knife, directed the other perpetrator to stab the victim, which he did, several times about his body.

Ms Louis insisted her son was “targeted”, adding in the fall 2018 term he was stabbed twice—once in the arm and once under his eye. To this end, she said the perpetrators of her son’s murder should be tried as adults.

Rolle, who was affectionately known as “PJ”, was described by Ms Louis as an affectionate son and protective brother of his two younger sisters, ages 10 and 8.

“He wouldn’t allow people to do them anything,” she said of her son’s relationships with his sisters. “You could see where he cares for his sisters, he looked out for them. He never wanted nothing bad, nobody to mistreat them.”

When asked about their own relationship, Ms Louis said the night before his murder, her son was particularly affectionate.

“(He) kissed me, hugged me, cracked silly jokes with me,” she said. “Because he was a (comedian).

“And for some reason lately it just was getting more and more and more. Like I would meet him in my room and then he would come playing with me or I’d be laying down in the bed and he (would come in) there and he hugging me and throwing himself on me.

“In these last few weeks…he really was showing the love.”

Ms Louis added her son promised to take care of her in her old age.

“I always used to ask him, ‘when I get older, you going to take care of me? Because you see the struggle, I struggle with y’all.’

The distraught mother said despite the bullying, her son loved school. She also commended the staff of TA Thompson for the love they showed her son.

“He loved school. I tried to take him out of school because it was so much going on (in terms of bullying). One day he comes home with his face swollen, where someone punch him. Then there’s a time when he got stab on his arm area. There’s another time again they stab him under his eye, beat him up.”

Ms Louis said these incidents began last September. Regarding the perpetrators, she said he knew both boys, and alleged he had an altercation with the perpetrator before.

When asked if the school could have done more to combat the bullying, she replied: “I think the school was trying, but if the law enforcement did push in more, because it’s so much going on, less things would happen.”

Ms Louis called for more police assistance because there’s only “so much the teachers could do.”

“I must say, (the teachers) really was there for them and they showed him a lot of love. The school showed him lots and lots of love. And to watch the students them…those students really love him,” she added, referencing how distraught the students of TA Thompson were as they filled the school’s halls yesterday morning.

Regarding the perpetrators of her son’s murder, Ms Louis said: “I only would like to ask them a question, and ask them why. Why they felt like they had to take his life? Why? I would like to hear what their response will be to me, face to face.

Ms Louis also addressed the widespread issue of youth violence in the country. “All I could say right now is this: my son passed. He is not coming back to me. In the meantime, if everybody could work together to save the other children, the other boys, save their life, save them from going to prison — pitch in and do more. Because maybe if everybody did pitch in and do more, what happened yesterday (Tuesday) maybe wouldn’t have happened.”

Don't sensationalize this story in this way Tribune!

Families should be left to grieve. Information on a criminal matter should come from the police or proper investigative reporting (ya'll remember how to do that?). Its the decent thing to do!

I'm sorry if students are stabbing and physically assaulting another student then they are no longer students and should of been removed from the school. Also I would transfer my child to a new school despite him liking his current school sometimes as a parent you need to make the decisions, he would of made new friends.

These serious school children behaviours put me in mind of what a retired school teacher told me about 12 years ago, ie, "Very soon, there will have to be an armed police in a classroom while a teacher teaches the class." Back then I felt shocked about what he said, but now it seems that he was right.

I think I have mentioned it before, ie, one of the main reasons we are always having so many problems in this country is that we take WAY too long to try and solve the problems. And that is why many of these problems become UNSOLVABLE! For a long time I have felt that our politicians should have serious brainstorming sessions and thereby find answers to all of these messy issues confronting us!

It brought tears to my eyes this morning when I heard the father of the student who was murdered speaking of the issues regarding his son's murder... an extremely serious situation, which may not be understood or felt by others who have not had a close family member murdered!