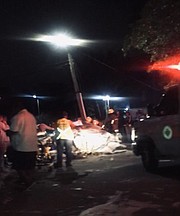 In the first incident, shortly after 11pm on Sunday, police were called to a scene of a traffic accident on East Bay Street.

According to police, the male driver of a black Honda Coupe lost control of his vehicle and crashed into a wall.

The driver died on the scene and a male passenger was taken to hospital, where he is listed in stable condition.

The Tribune understands the deceased is Adorian Williams, however his identity was not released by police.

In the second incident, shortly after 2am yesterday, police were called to a scene of a traffic accident on Baillou Hill and Wulff Roads.

Unfortunately, a male pedestrian was hit and died at the scene.

Both matters are being investigated by traffic police.

These traffic fatalities brought the count for the year to 14, according to The Tribune’s records.

Speaking to reporters on the sidelines of a local government workshop yesterday, Transport and Local Government Minister Renward Wells highlighted the number of deaths in 2018 due to traffic fatalities.

Mr Wells said: “(In 2018) we had more deaths in the first three months of the year than we had murders in the Bahamas. More deaths by traffic fatalities. I think we have to realise that in our push for modernity and making the Bahamas more modern we created a lot more highways.

He added: “You can get away with doing certain things when you have dual lane highways where someone can travel at 60, 70, 80, 90, 100 miles an hour...looking at the cell phone for a second (and) picking that up and drinking and being a (little) tipsy...there are a lot more issues that are possible when moving at that kind of rate of speed so we need to address it now because we no longer live in a fishing village.”

The minister said on Wednesday he will lead the debate on the amendments to the Road Traffic Act in the House of Assembly,  which are meant to make the country’s roads safer.

The proposed amendments, tabled in the House of Assembly last September, will make it illegal to drive or operate a vehicle while using a cellphone, or with an open alcoholic beverage.

Failing to “immediately” produce one’s driver’s licence and insurance certificate when asked to do so by police will also become illegal as the Minnis administration seeks to eliminate provisions that gave drivers two days to produce such documents in order to escape penalties.

The bill will also make it illegal to drive or operate a vehicle while using an electronic communication device, “whether by holding in ones hand or both hands or with any other part of the body or otherwise,” unless the device is attached to the vehicle or is a part of a fixture in the vehicle.

Driving instructors also will be prohibited from holding electronic devices under the bill, but the stipulation will not apply to those driving emergency vehicles or a vehicle that is lawfully parked and not impeding traffic. The penalty for contravening these provisions will be a fine not exceeding $1,000.

Bahamians not use to driving on multi lane roads but a lot of these same Bahamians can navigate a car on I-95 in Florida which has 6 lanes per side ! This is the stupidest statement I have ever heard uttered !!!

Reall! you said "a lot of these same Bahamians" its a difference between a lot and ALL

Fact is Bahamians like slackness...overtaking where they shouldn't, creating their own lanes and short cuts, not wearing seatbelts, pedestrians crossing the road all willy nilly, drivers not paying attention to pedestrians, stopping in the middle of highflow traffic, no use of signals, cars without brake or tail lights, driving using high beams...

And the list goes on... all this and more causes the traffic problems and accidents.