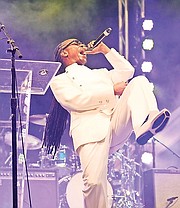 The 48-year-old was charged before Acting Deputy Chief Magistrate Subusola Swain on a single rape charge stemming from the March 8 incident.

He was not required to enter a plea to the charge and the matter was adjourned to May 28 for service of a voluntary bill of indictment.

Bail was denied and he was remanded to the Bahamas Department of Correctional Services in the interim. He has the right to apply to the Supreme Court for bail. Christian Massive is a local gospel singing act.