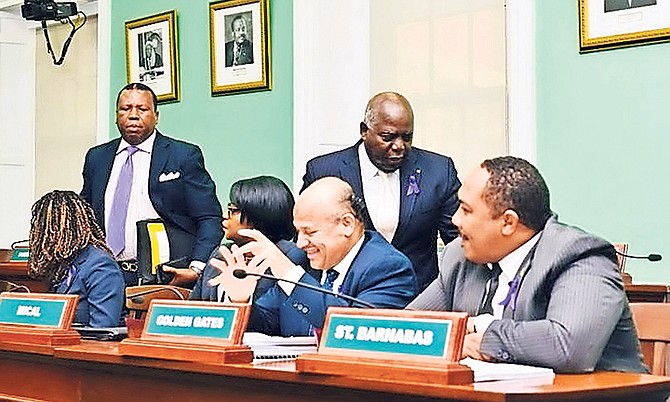 Opposition members marked their disapproval after a lengthy argument by walking out of the chamber before Speaker Moultrie ruled on the matter.

Mr Davis’ resolution called for parliament to reject Mr Turnquest’s communication because it “did not fully comply with the Financial Audit and Administration Act”. Mr Turnquest called this notion “nonsense”.

The law requires that a communication be laid in Parliament every February. Mr Davis did not explain how Mr Turnquest’s communication failed to apply with the law.

Mr Davis and Speaker Moultrie clashed on whether the resolution should be put on the agenda. Mr Davis stressed he was giving notice of the resolution, not calling for it to be debated immediately.

“The issue of whether this is appropriate comes up at time of debate,” he said. “If they don’t want to debate it, they could move closure or vote against it.”

Speaker Moultrie, backed by Carmichael MP Desmond Bannister, said he is within his right to reject certain notices.

Mr Bannister said the resolution was “highly irregular and flawed.”

“The FAA simply imposes on the minister of finance the duty to lay before the House the budget statement, that is his only duty. Any inference that he has some further duty in relation to his legislation is incorrect because there is nothing else after that that is mandatory. Everything else is discretionary.”

He added: “As I look at (Erskine May: Parliamentary Practice), May says there are notices irregular where the House essentially has a duty to reject them.”

Mr Moultrie said: “The member in his resolution was asking the House to reject the communication when in fact the law demands that the communication be laid so there must be something highly irregular about that. What the resolution is seeking to do is ask the House to reject the law. The ruling of the chair is that the notice is highly irregular and is dismissed as being frivolous, scandalous, vexations and an abuse of the parliamentary process.”

Mr. Davis needs to resign before he fully embarrasses himself, his family and his legacy. Now that he has the spotlight he is seen as completely inadequate. Short man syndrome will be his downfall.

He's way too late! This short pudgy fella, who has dirty stubby grubby yellow sticky fingers, has been generally recognized for what he is for many years now, i.e. nothing but a corrupt buffoon. LMAO

Cheaper the Speaker pitch a tent and put their seats out in Parliament Square ........ smt

Coward Davis and the few worthless PLP parliamentary minions he leads are doing what they all do best - suck heavily on the taxpayer for their outrageous parliamentarian salary, pension and health benefits while doing absolutely nothing to help preserve our all too fragile and failing Westminster system of democracy. By their frequent childish walk-outs, they're trying to create the illusion that the arrogant and very nasty Minnis is a de facto dictator. But the voters see straight through all of this foolishness. The people now see the short pudgy Davis as being out there on the street behaving like an emperor wanna-be who doesn't realize he's no longer wearing any clothes. ROWL

Philip “Gravy” Davis objects, but cannot even explain the basis for his objection. Anybody who is surprised, raise your hand. Anybody? Bueller? Bueller? Anybody ... ?

Once again my fellow commenters are showing the D+ average at work.

"...The law requires that a communication be laid in Parliament every February. Mr Davis did not explain how Mr Turnquest’s communication failed to apply with the law..."

Well, for one thing, yesterday was not February. The next thing is the man is requesting a debate. Im sure the budget paper does not show how BPL plans to borrow $95M from NIB to buy some wacky 9-stroke generators from Farawayland.

You people seem to relish having an Opposition with duct tape on dey mout - whether FNM or PLP. That is called dictatorship or Monarchy. Perhaps yall secretly long for the pre-independence days. Nostalgia?

I agree with you. Davis may be unsavoury politically but all he's asking is for KP to explain the budget and MULTIPLE FNM ministers are telling him we dont have to explain nothing to anyone. And us who are affected by increasing fees and taxes are saying "das right tell him shut up". This is bizarro world

Budget debates are in May-June. . .February is mid-year presentation. . .Davis should know. . .they are the one who re-enforced that clause last term! He was asked how the current government did not comply with the requirements of law on mid-budget presentations. If he wanted to call something to order he could. . .but what the speaker asked! NOTHING. . .bouy rest yinna nonsense ya hear. . .

Yep. That's how yall think until time for election then everyone gah be crying about how we need to get rid of this FNM govt at all costs even if it means putting the PLP back in. It will be 2017 in reverse.

Silly rabbits, tricks are for kids.

Opposition Leader in the Lower House please get your act together you guys are making me vomit seriously!!!!!!!

I'm truly surprised. The government is arguing with Brave Davis to defend why they don't have to justify how they spending treasury money. Kendal Isaacs must be rolling over in his grave.

Exactly. It seems the motto the FNM wants to live by is:

BAHAMAS GOVERNMENT What they do with YOUR money Is THEIR business

That's not why the rowing. . .that's what mid-year budgets are. . .TELLING HOW THEY SPENDING THE MONEY SO FAR. . .what they are telling brave that you had already voted for this spending and now want row double over it.. .wait until the next budget time and don't vote. . .or vote yes and shut he dang mouth already!!

I don't support the PLP's walk out of the house of assembly.But I have an idea of why the FNM won't debate the mid-term budget.

That is why we need an Ombudsman Office and an independent PAC or Oversight Committee ...... The Senate serves no Oversight purpose either.

Yall right dang here in the front of all this activities going on in yinna HOA and yinna seem not to know a damn thing of how she works!! BUT YOU HAVE AN IDEA!! Hahahahahahahahahahahahahahahahahahaha. . .DUH! MAYBE BEACUSE IT IS NOT THE TIME THAT THE LAW REQUIRES A BUDGET DEBATE PROCESS. ALL THE SPEAKER WAS ASKING MR DAVIS IS THAT IF YOU HAVE A MATTER OF ORDER. . .STATE IT AND LETS GET IT ON! " I WANT TO DEBATE" IS NO REASON FOR THE WHOLE WORLD TO STOP. . .HE CAN'T EXPLAIN ANYTHING ANYWAY. . .LETTING HIM OR DOC EXPLAIN ANYTHING IS LIKE SWIMMING IN A LEAD WET SUIT!! ZZZZZZZZZZZZZZZZZ!

Why not have a debate? What are they afraid of and what do they have to hide??

MAYBE IT IS BEACUSE THE LAW DON'T CALL FOR IT NOW. . .THEY DONE DEBATED THAT BUDGET TO DEATH LAST MAY! ITS THE SAME BUDGET THAT MR. DAVIS DONE DEBATED AND VOTED ON. . .MID YEAR PRESENTATIONS ARE JUST TO SHOW YOU THAT THEY ARE STICKING TO THE BUDGET. . .HI PUT THAT IN PLACE. . .THE PLP USED IT. . .NOW DAVIS WANT TO GO CONTRARY TO IT!! Hhehehehehehehehehehe. . .yinna digging deep in the weeds to find some relevance nah. . .

Only smart honest people like that accountant/banker guy named Bowe can tell us the true ins and outs of the budget. The ones sitting in parliament can't even balance their own personal cheque book register, which allows Turnquest to pull the wool over their eyes. LMAO

Then you don't know Mr. Bowe. . .hehehehehehhehehehehehehehehehe. . .and they are pulling the wool over ya eyes. . .AND THEY CAN DO IT WITH EASE BECAUSE YOU ARE THE ONE BLINDING YOU. I GUESS TO ASK YOU ABOUT A CHARTERED ACCOUNTANT IS FUTILE. . .IS LIKE ASKING YOU ABOUT HOW TO MAKE A ROCK SANDWICH. . .YOU PROLLEY WILL TELL ME TO START WITH PURITY BREAD!! Hahahahahahaha. . .