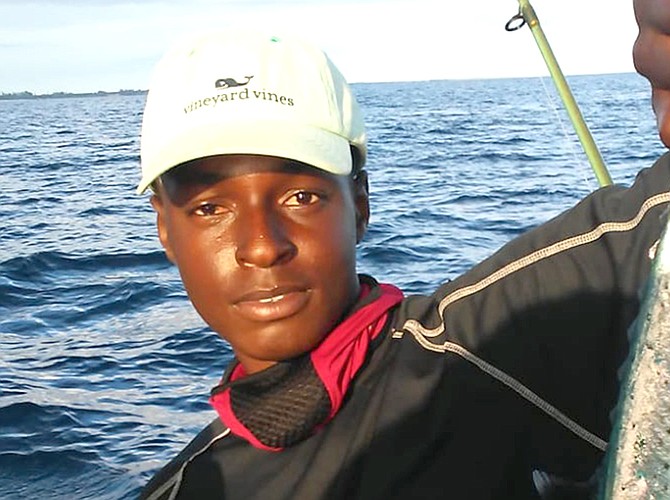 THE mother of slain 16-year-old Joshua Davis is in a state of disbelief over the stabbing death of her son, whom she described as a vibrant, hardworking boy who was getting his life back on the right track despite his troubled past.

Michelle Davis, a self-employed food vendor, said she loved her son and did her best to help him. She said she always tried to discourage him from keeping bad company.   “It hurts and it is not an easy pill to swallow at this time; it is very hard to accept that he is gone,” she told The Tribune yesterday from her beachside food stall.

“Joshua was there for me. I am not condemning no one’s child, but it is very sad to see you carry your child from that age and he was just slain, taken away from you just like that. If it was sickness if would be different, but for somebody to take out a knife and stab your child like that, is sad.”

Assistant Commissioner of Police Samuel Butler said police have three young men ages 17, 19, and 20 in custody who are assisting them with their investigation into the teen’s murder.

He extended sympathies to the deceased teen’s family.

“It is an unfortunate situation,” the police chief said of the boy’s murder.

According to reports, police received a call around 1am on Monday of a stabbing incident at All Access night spot at Peach Tree Street, Freeport. A minor had been stabbed in the upper body and had been taken to Rand Memorial Hospital, but died of his injuries.

Ms Davis said that she last saw her son around 8pm on Sunday at home. She said that he left with some friends to go to a party at Taino Beach. She told Joshua to be back home at 11.30pm.

However, sometime after 3am on Monday she was awakened by a loud banging at her door, and received news that Joshua had been stabbed and was at the hospital.

“It was around 3.30am I heard a banging on my door and jumped up. I didn’t realise that Joshua did not come (home) yet because he has his own key and I know he always come home by 11.30pm,” she said.

“A friend of mine was at the door and said ‘Michelle, you don’t hear what happen, Joshua got stabbed and is in the hospital.’”

“I went to the toilet about four times before I could get to the hospital,” she recalled.

When she and her friend arrived at the Rand Memorial Hospital, Ms Davis said hospital security and a police officer told her friend that Joshua was stable. She never expected that her son was dead.

“When they carry me to the back and they sit me down, a doctor came out. I thought I was going in there to see Joshua on the bed on the drips or something, but the doctor came out and closed the door and said to me, ‘your son got some damage to his heart and by the time he reached he was gone.’

“I said ‘no, no, no, it can’t be Joshua.’ I was so shocked and lost, I could not go inside to look at Joshua. I went straight home,” she said.

Ms Davis went to the hospital the following morning to identify her son. “That is my only son in the Bahamas, I have a next son in Boston who is my first son,” she said.

Ms Davis, who is a Jamaican, said that Joshua had lived with his father in Nassau for awhile and would come to Grand Bahama to be with her in the summer. She said that Joshua told her he wanted to stay with her.

She said that Joshua had attended primary school and junior high in Freeport, and was also a student at St George’s High. However, she said when he returned to Freeport, school was already closed so she enrolled him in the technical school in Hawksbill to start a trade.

“Joshua was a vibrant boy. He was giving a little trouble here and there, but that is a natural thing for a teenager. I know Joshua was in problems, but I always said to him, ‘don’t forget, I love you. I am your mother,’ and he always put a smile on his face,” she said.

Ms Davis said her son loved the ocean and loved to fish and dive, and would always catch fish and conch for her to sell at her small food van on the beach. He also held various jobs packing groceries, working at the movie theatre, and at the gas station to earn money, she said.

“He got himself together and he got a job at the gas station near the harbour; everything was going good. He was excited about getting his pay, and he buy a brand new suit and lay it on the bed and ask me if I like it, and I said, yes, I like it.”

“I told him don’t let midnight catch him out there, and to call me if he need me to pick him up.”

It was the last time that Ms Davis would see her son alive. She said that she does not condemn the youth that took her son’s life because teens are easily influenced by peer pressure.

Ms Davis is urging other parents to be vigilant if they see their children hanging out in the company of three or more other children.

In order to cope with the her loss, Ms Davis said she has to keep herself busy.

“I still come out to work because if I sit down at home I will be thinking about it too much. I cannot sit at home because it is going to be more hurtful, so I have to keep my mind occupied,” she said.

The Tribune really has to improve the quality of their reporting!

I am very sorry for the mother and her child. No words can heal her pain