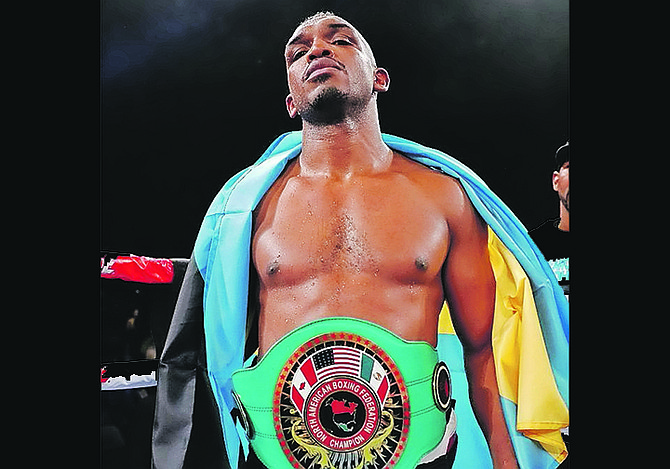 TUREANO ‘Reno’ Johnson reacts after he beat up Ireland’s Jason Quigley for the North American Boxing Federation (NABF) middleweight title in a 10-round main event of the Golden Boy DAZN Thursday Night Fights at the Fantasy Springs Casino in Indio, California. Johnson put on a boxing clinic for a ninth-round stoppage.

TUREANO 'Reno' Johnson said his dominating performance over Ireland's Jason Quigley for the North American Boxing Federation (NABF) middleweight title is just the tip of the iceberg. He now wants to go after a world title.

In the 10-round main event of the Golden Boy DAZN Thursday Night Fights at the Fantasy Springs Casino in Indio, California, Johnson put on a boxing clinic for a ninth-round stoppage.

He dedicated the fight to two of his nieces, Faith Davis, who passed away in November and Deandrreanique Minus, who died on May 1, both as a result of cancer.

"We are in Florida right now. I'm just waiting for them to mail me my belt. I don't want to return home without my belt," Johnson said. "So I'm just taking it all in and relaxing. Hopefully, the belt will arrive today or tomorrow so I can come home."

Johnson, 35, left California without the belt because one was not prepared for him. Johnson believes that the organisers of the fight didn't anticipate him winning and so they didn't get a belt prepared for him.

"I don't think they actually expected me to win the fight," Johnson said. "Jason still has his belt that was customised for him. He just lost his title. But they didn't have one customised for me so they had to prepare it after I pulled off the upset."

Having moved up the ranks from a fledgling amateur programme, Johnson said he was destined for greatness in the pro ranks and now he's on the pathway to fulfilling his long-time dream of becoming an undisputed world champion.

"From the beginning of time, I was encouraged by my mom (Ikenna Johnson) and my dad (Erwin Johnson) and now my wife (Natania) and my 11-year-old daughter (Tatiana), who is one of the strongest engines behind me in my boxing career," Johnson said.

"I am pleased with my boxing career thus far. I think I have done my country just and I've made my country proud. As an amateur, I was number one in the Caribbean for many years, having won over 14 CARIFTA Games gold medals and at least six boxer of the tournament, winning a medal at the Commonwealth Games, making it to the World Championships and medalling at the Pan American qualifier and making it to the pinnacle of my career at the Olympic Games where I obtained a number four ranking in the world."

"I think I've done great for boxing in the Bahamas," Johnson pointed out.

"As a civil servant, I think I've done a great job with my Big Brother Outreach programme and so I am proud of what I have accomplished in boxing.

"Right now, there's much more to come. There's much more left in my tank. I'm looking forward to the future. Hopefully, before this week is out, I will know what else is there for me to do. But definitely, my focus is to fight for the world title. I'm talking about not just unifying, but becoming the undisputed middleweight champion of the world."

The plan now is to get ready for a possible shot at the world title. "We are right now eligible to fight a world champion, so hopefully I will get a chance," he said. "Whoever steps in the ring, Tureano is ready to bring the heat. I'm going to step in there with the Bahamas on my shoulder. I'm carrying everybody in the Bahamas into the ring."

After literally destroying Quigley, whose trainer Dominic Ingle threw in the towel just before the start of the 10th round, Johnson said he knows that most of the fighters will probably think twice about agreeing to fight him.

"I was very explosive against Jason. I was much more polished and more technical than the brutal fighter that I was in the past. I threw about 11 punches more than I normally throw, so that was an accomplishment in itself for me.

"There is much more improvement for me to make, but we are taking it step by step. So I believe there is a lot of fear right now about taking on Tureano Johnson, but at the same time, a lot of them misjudge me because of my age."

With a 21-2-1 win-loss-draw record, Johnson said most fighters would sort of bypass those stats and lean more on taking a chance on fighting him because he is 35 years of age.

"Longevity is one thing that we as Bahamians hold. When you look at Sherman 'the Tank' Williams, he's one of the strongest fighters in the heavyweight division in the world today. He's a senior man, but he's still one of the most feared heavyweights in the world," Johnson said.

"That's one thing about Bahamians. We have that longevity and that may be the reason why we could probably lure some of the fighters to take me on, rather than my performance in the ring. That could be one of their biggest mistakes because Tureano was much more complete than my opponent."

While his performance gives him reasons to celebrate, Johnson said he's not going to let his victory overpower his bid to get ready for a world title shot. "Right now it's time to get back to the drawing board and get focused on our next fight," he said. "I'm being blessed and God has blessed me tremendously, but there's no time for me to rejoice and celebrate.

To prepare for a 10-12 round championship fight with about six sparring partners, Johnson revealed that it costs about $20,000. Add all of the other dimensions of the 12-week training camp and Johnson said he could easily spend about $60,000 in total.

Johnson and his wife thanked the Johnson family, his pastor, Apostle Phalmon Ferguson and the members of United Faith Ministries on Fire Trial Road, KS Moses, Aquapure and Food Kingdom for their financial support. They also thanked Cordeo Bonamy of the Family Medicine Center, his physiotherapist and Dr Goud at Princess Margaret Hospital.