Plp To Challenge Bennett Minnis In His Own Backyard 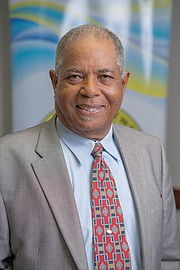 PROGRESSIVE Liberal Party officials will visit Clarence Town, Long Island, after the party’s convention this month, daring Water & Sewerage board director Bennett Minnis to make good on his threat to block them from the area, PLP chairman Fred Mitchell said.

His statements came as he demanded that Mr Minnis, a Free National Movement official, be removed from the board of WSC.

In a voice note recently circulated on social media, Mr Minnis called the PLP a party of “corrupt, thieving, no good, bastard, homosexual, African monkeys.” To many, his comments were a clear breach of protocol requiring people in public service to avoid political controversies.

He doubled down on the comments in an interview Tuesday with The Tribune, saying the PLP’s presence at the gravesite of his late cousin Sir Henry Milton Taylor incensed relatives. Sir Henry is one of the founding fathers of the PLP.

Speaking during a PLP rally on Tuesday night, Mr Mitchell said: “There’s a man named Bennett Minnis. You heard the voice note. We went down to Long Island to honour the founder of the party, Sir Henry Taylor.

“We did it last year, we did it this year, an innocent gesture, a simple service, and that is now turned into a political battlefield, and you heard the nastiness, ‘sissying, tiefing, black monkeys’ and so forth. I say to myself, my ma used to say, I heard him talking about ‘sissying and tiefing’, I say in answer to that, it takes one to know one.

“This is a man who is a public official, he serves on the Water & Sewerage Corporation board. If this had been Sir Lynden Pindling and one of this members had done that he would’ve been gone within seconds. And the only reason we’re not pushing the issue right now, I sent the matter to Desmond Bannister, the minister of works, but he is in mourning because his mother died. But once that mourning has passed we expect the government to deal with this man Minnis. And as George Mackey once said to me, not only one woman born a crazy child. And if you can act crazy, I can act crazy too so I want to tell him this: I called the people in Long Island and I told them, after this convention is over, we going to Clarence Town. And we gon’ see what you gon do. You try any sugar, honey, ice tea. You try it. I’m a Bahamian and I go anywhere in the Bahamas.”

So far, FNM officials have not condemned Mr Minnis’ statements and it is not clear if he will be allowed to remain on the WSC board. During the FNM’s days in opposition, Mr Minnis remained a steadfast supporter of Prime Minister Dr Hubert Minnis, The Tribune understands. The PLP’s convention is scheduled for July 25-26.

Is there a need some kinds Professor of Protocol, advise public service comrades how best duck away from committing clear breach protocol, yes, no............

Bennett Minnis is a bitter old man. But at the same time he does not have the right to stop any one from going to public places.

Leave the miserable man to himself. his bitterness and misery will destroy him and it may be sooner than any one can imagine.

licks2, they had permission from a family member, as was stated in previous Tribune articles.

Chile please. . .I carn gee you permission to go into my brother's house. . .or go drive my sister's car! Also, like the man said. . .he is the family spokes person. . .they carn go there without speaking with him!! The PLP is doing fally. They acting like the right to private property don't apply to them!! THEY CANNOT GO TO A GRAND NIECE FOR PERMISSION TO HOLD AN OFFICIAL PARTY ACTIVITY ON A PRIVATE PROPERTY IF THAT GRAND NIECE IS NOT THE PERSON IN THAT FAMILY WITH THE POWER OF ATTORNEY OR OWNERSHIP!!

Seems to me he is exercising his constitutional right, freedom of speech

If Mr. Mitchell knows what is good for himself. . .HE WILL STAY HIS BACKSIDE OUT OF LONG ISLAND TO DO FALLY!!

Fweddy and his ilk are barking up the wrong tree ....... he will make no political mileage by coming back to Long Island ........ Save your money and pay homage to Pindling on East Street.

I TALKED WITH ONE MAN AND HE TOLD ME THAT IF THEY COME DOWN THERE. . .WELL YOU KNOW HOW BAHAMIANS GO WHEN THEY EEN ON YA RUN AND YOU COME BOTHERING THEM!!!