Serena Brown To Transfer From Aggies To Hawkeyes This Fall 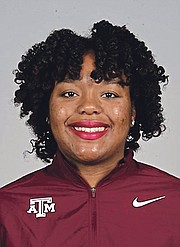 SERENA Brown will make the transition from the Southeastern Conference (SEC) to the Big 10 for the next step in her collegiate career.

Brown will transfer from the Texas A&M Aggies to the University of Iowa Hawkeyes for the Fall 2019 campaign, her redshirt junior season.

The discus national record holder underwent surgery to repair her rotator cuff in January 2018 and sat out last season with the Aggies and was sidelined for the entirety of her junior season. “With all of my weightlifting and overhand movement, the bone was rubbing against my rotator cuff and I was in a lot of pain. So they went in and they corrected those problems so I will be able to move more freely now,” Brown told The Tribune following the surgery.

“I’m just happy now because the problem is fixed and I don’t have to worry about it anymore. Last year was probably the worst year for me because I could barely practice. The pain was that bad.

“So I’m just happy that it’s finally done. I just want to make sure that I am properly healed and then I can come back and do what I know I am capable of doing.”

During the indoor season, she competed in a single meet, the Reveille Invitational, where she placed fifth in the shot put (44-8 ¼).

At the junior national team level, she finished fourth in the discus at IAAF World Juniors in Poland with a national record and national junior record of 173-0 (52.73).