Brown To Redshirt Her Junior Year For Aggies 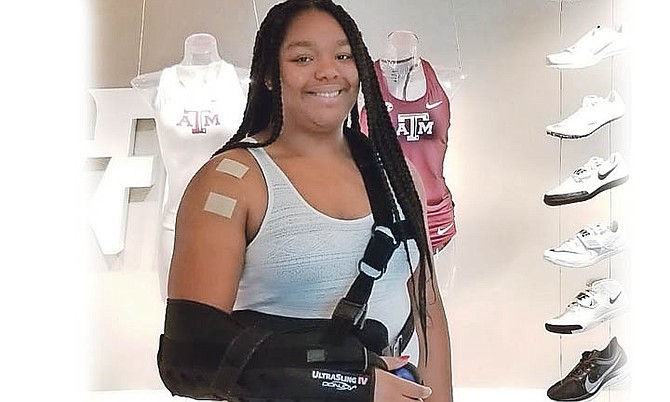 Brown completed the surgery on Friday in College Station, Texas, and will require therapy and rehabilitation for the next three months before she can start any training.

Delighted to have her parents Whittington and Sonjia Brown by her side for the operation, Brown said she’s relieved that the pain she experienced in her shoulder since she began her freshman year at Texas A&M is gone.

“With all of my weightlifting and overhand movement, the bone was rubbing against my rotator cuff and I was in a lot of pain,” Brown pointed out. “So they went in and they corrected those problems so I will be able to move more freely now.”

With a projected period of six months before she can start competing again, Brown will redshirt her junior year and just concentrate on her studies.

“I’m just happy now because the problem is fixed and I don’t have to worry about it anymore,” Brown said. “Last year was probably the worst year for me because I could barely practice. The pain was that bad. So I’m just happy that it’s finally done.

“I don’t mind sitting out this season. I just want to make sure that I am properly healed and then I can come back and do what I know I am capable of doing. I will be doing my rehab and everything, following the doctors’ orders and doing any modified workouts that the coaches will put me on.”

And even though she won’t be competing, Brown said she intends to be on the sidelines cheering for her team-mates when they compete in their home meets this year in College Station, Texas. But she will also take the time to focus on her studies.

“I started upper level courses this semester and so I’m really looking forward to it,” said the St Augustine’s College graduate of the Class of 2016.

Despite the injury she had to endure during her sophomore year last year, Brown tossed the discus 60.39 metres or 198-feet, 1-inch to improve on her previous mark of 56.84m (186-5) on April 28, 2017 that eventually erased Lavern Eve’s 26-year-old national record when she won the Texas Relay title.

Brown, 20, was hoping that she would have qualified to compete at the IAAF World Championships in Doha, Qatar in September, but she said she will take it in stride and if she doesn’t make the trip, she will get prepared for the 2020 Olympic Games in Tokyo, Japan.

“The trials are in July, so I will see how it goes,” Brown said. “I could probably do the trials and go ahead and compete in Doha, but I’m just looking forward to recovering and whenever I get to that point, I will cross that bridge.

“I’m just focusing on my recovery. If I’m able to do the trials, I will. I want to do it because the World Championships is one of the meets on my list, but either way if I get to go or not, my main goal is to go to the Olympics and do very well in 2020.”

Last year, Brown finished 13th in the discus at the NCAA Championships with a mark of 165-7. During the NCAA West Preliminary round her toss of 176-9 placed her eighth. She fouled three discus attempts in the SEC Championships to finish 11th in the shot put (47-1 ¾).

In addition to producing her career best in the discus, Brown opened the outdoor season with a discus victory (168-8) at Baldy Castillo and placed 11th in the shot put (43-2 ½). She also had a toss of 182-11 (55.75) to place second in the discus at the UTSA Roadrunner Invitational. Additionally, Brown won the Houston Alumni Invitational with 167-8, was runner-up in the discus (169-10) and third in shot put (47-6 ¼) at the UCLA Invitational.

She also claimed the discus win (170-10) and finished sixth in shot put (46-7 ½) at the Michael Johnson Invitational.

In her only indoor meet, Brown competed in the Reveille Invitational where she placed fifth in the shot put (44-8 ¼).