Six Foreign Nationals Discovered On Boat Off Freeport Up In Court 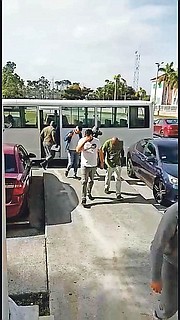 Some of the foreign nationals discovered on board a vessel in waters off Freeport in December.

SIX foreign nationals discovered on board a vessel in waters off Freeport on December 26, 2018 were charged in the Freeport Magistrate’s Court with breach of the Immigration Act.

Five Romanians and one Jamaican appeared on December 27 in Court Three before Magistrate Rengin Johnson for overstaying, illegal embarkation and illegal landing.

According to the particulars, Smith entered The Bahamas legally from Jamaica on November 18, 2018, and was admitted for a period of 14 days. Smith did seek to extend his visitor’s status which had expired.

He pleaded guilty to overstaying and was fined $3,000 or in default, he will serve nine months in prison. On the charge of illegal embarkation, Smith was fined $300 or six months imprisonment. Smith was unable to pay his fine. Magistrate Johnson said the sentences are to run concurrently and ordered Smith to be deported on completion of the prison term.

The men had entered the country legally as visitors, having been admitted on December 13. They failed to seek an extension of their visitor’s status.

They pleaded guilty to overstaying and were fined $3,000 each or, in default, will serve nine months imprisonment. The men also pleaded guilty to illegal embarkation and were ordered to pay a $300 fine or serve six months in prison.

Immigration officials found no evidence that the trio entered the country legally.

They pleaded guilty to the charges. Magistrate Johnson ordered each of the men to pay a $300 fine on each count or serve six months in prison.

The five Romanians paid their fines and were flown to New Providence to the Carmichael Road Detention Centre to await deportation.