Negri And Kleen In Lead At Star Sailors League Finals 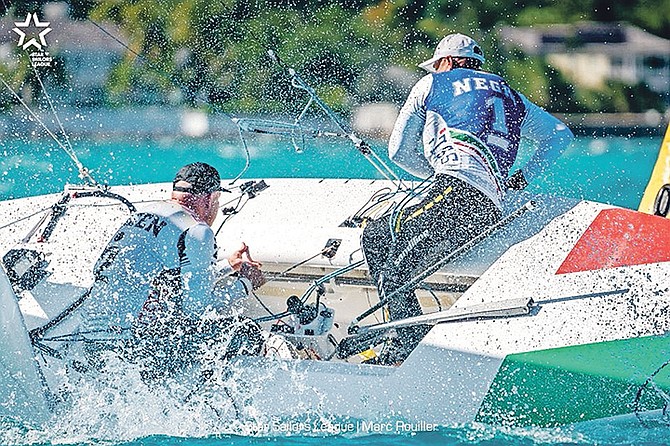 Diego Negri of Italy (captain) and Frithjof Kleen of Germany (crew) were just one point behind headed into yesterday’s competition but surged atop the leaderboard after a trio of top five finishes in Montagu Bay. Photo: Marc Rouiller/Star Sailors League

DAY two featured a shift atop the leaderboard at the Star Sailors League Finals.

Diego Negri of Italy (captain) and Frithjof Kleen of Germany (crew) were just one point behind headed into yesterday's competition but surged atop the leaderboard after a trio of top five finishes in Montagu Bay.

They took first place in race three, second in race four and were fourth in race five for a total score of eight.

Mateusz Kusnierwicz (Poland) and five-time Star World Champion crew and titleholder, Bruno Prada (Brazil), also rebounded from a slow start on day one with two top three finishes yesterday. They finished third in race three, ninth in race four and concluded the day with a second place finish for a score of 17 overall.

Volvo Ocean Race winner and America's Cup veteran Paul Cayard (coming from the Top Ten in the SSL Ranking) along with fellow American Phil Trinter are now third with 19 points.

They concluded the day with a first place finish in race five.

They were also fourth in race three, but were a disappointing 14th place finish in race four.

Eivind Melleby of Norway (captain) and Josh Revkin of the United States (crew) lead the field after day one but fell behind their pace on day two. They finished in sixth, eighth and 15th respectively to round out the top five with a score of 23. Bahamian skipper Mark Holowesko and crew - Christoph Burger of Switzerland - are still ranked No.23 in the field with a score of 87. They finished 21st in race three, 22nd in race four and 23rd in race five

An elite gathering of 23 star-studded teams are in competition, including a number of wildcards drawn from many parts of the world of high-level sailing.

After four days of qualification rounds for all 23 crews, the competition goes into the knockout stages on Saturday, December 7.

Single races decide who survives and who is heading for the dock.

The last four teams will contest a thrilling final race, the first to finish will be the winner of the 2019 SSL Finals and take home the lion's share of the $200,000 prize purse.