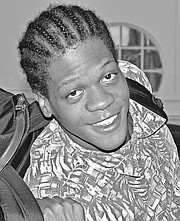 RENALDO Hudson walked out of the Supreme Court a free man yesterday and pledged to lead a “productive life” after a jury found him not guilty of two counts of murder, attempted murder and armed robbery.

“First of all, I got to say God is good,” said the 22-year-old. “Three years and seven months I spent on remand for this.”

A jury of five men and eight women brought back unanimous not guilty verdicts shortly after 4pm yesterday on all four counts in a retrial.

Justice Estelle Gray-Evans acquitted Mr Hudson of all the charges and told him he was free to go and thanked the jury for their service.

Outside the courtroom, Mr Hudson told reporters that he had faith he would be acquitted of the charges.

The young man had been remanded to prison at age 19 after he was arrested and charged for the armed robbery and murders of Jacklyn Armbrister and Noel Hamilton, and the attempted murder of Agatha Gaitor that occurred on March 21, 2016, in Freeport.

The court heard that sometime around 11.30am that day, police received a call about a shooting in the Hearn Lane west area. On arrival at a shack, officers discovered three persons had been shot in the head.

The man was dead at the scene, a woman was unconscious, and another woman was calling out for help. Ms Gaitor was taken to hospital suffering from gunshot injuries and was later airlifted to New Providence.

After conducting investigations, police arrested Mr Hudson on April 8, 2016 who had allegedly confessed to police while on inquiries of shooting three people and robbing a lady.

At the trial, Mr Hudson claimed the confession was not voluntary and that he was forced to say what he did. His first trial in 2018 ended in a mistrial when a juror was contacted by individual and threatened.

When asked what are plans his now that he is a free man, he said: “To start leading a productive life.”

Mr Shurland said the outcome was just, but that it was unfortunate that his client was incarcerated for three years pending his trial.

“I think the police did a very poor job in the investigation. It was very evident by the verdicts that they should not (have) charged Mr Hudson. It is unfortunate that he had to spend three years on remand.

“Whenever the jury come with a 12-0 verdict on all charges, there is no doubt in their minds that this young man is innocent. As we went through the trial, I realised a lot of the key witness the prosecution intended to rely on did not show up.”

Mr Hudson was initially represented by Mario Gray, but during the trial they had a misunderstanding, and Mr Shurland elected to finish the trial.