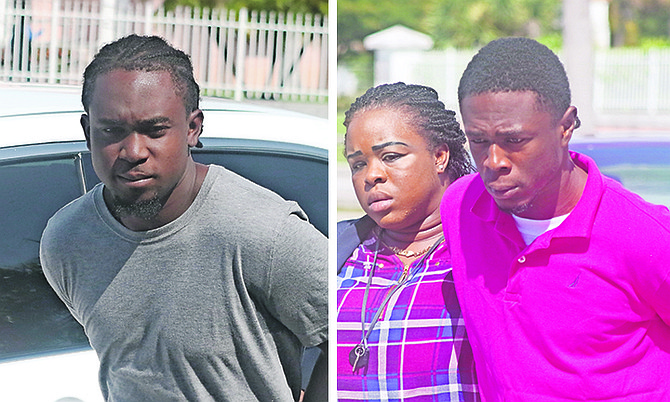 TWO men charged with armed robbery yesterday in the Freeport Magistrates Court claim they were beaten and threatened by police officers while in custody at a police station in Grand Bahama.

Jamal Laroda, 24, and Isaiah Walkine, 25, appeared before Magistrate Charlton Smith. Laroda accused police officers of threatening him and beating him while in custody, resulting in him sustaining bruising and swelling to his hand and chest. Walkine claimed that officers threatened he would never see the light of day if he did not say what they told him to say.

Laroda told the judge that he feared for his life and begged not to be sent back to Central Police Station. He was represented by lawyer Simone Brown. Walkine was not represented by counsel.

It is alleged that on August 3, at Freeport, the accused men, while armed with a handgun, robbed Marion Bethel of $2,050 cash. They pleaded not guilty to the armed robbery charge. They were not required to enter a plea.

In light of the brutality allegations, Ms Brown requested that her client to be seen by a physician and also said he wanted an opportunity to detail the claims of police abuse.

Laroda alleged that while in aninterview room at the Central Detective Unit, he was forced and coached by officers about what to say. He claimed that officers threatened that he would be given life imprisonment if he did not comply.

He claimed officers wearing masks dragged him out of his cell in the middle of the night. “I saw a woman with a condom and a stick. After they get information they needed, I did not want my behind (bottom) assaulted,” he told the judge.

The magistrate asked: “The woman had a condom on the stick?”

Laroda said the woman had a Magnum condom in one hand, and the stick in her other hand.

“I sacred to go back to Central Police Station because I might get beating if I go back there and I have a heart condition,” he told the judge.

When asked what sort of heart condition he has, Laroda said MVP (mitral valve prolapse) is a condition in which the two valve flaps of the mitral valve do not close smoothly or evenly, but instead bulge upward into the left atrium. Mitral value prolapse is also known as click-murmur syndrome, Barlow’s syndrome or floppy valve syndrome.

Laroda said that he was diagnosed with MVP during his childhood and has been prescribed medication from doctors at the Rand Memorial Hospital. When asked by the judge if he takes his medication, he said that he does not take it often.

Ms Brown asked that her client be seen by doctors at either Hawksbill clinic or Rand Memorial Hospital before he is sent to prison on remand.

Walkine claimed that he too was threatened by officers who coerced him into giving false information. “I feared for my life so I did what they say. They told said if I didn’t I will never the light of day and I never see my children,” he said.

Both men were denied bail and the matter was adjourned to September 30 for a voluntary bill of indictment. They were remanded in custody to the Bahamas Department of Correctional Services.

Magistrate Charlton made a note of the police brutality accusations, and ordered that Laroda be seen by a physician yesterday before he was transferred to prison.