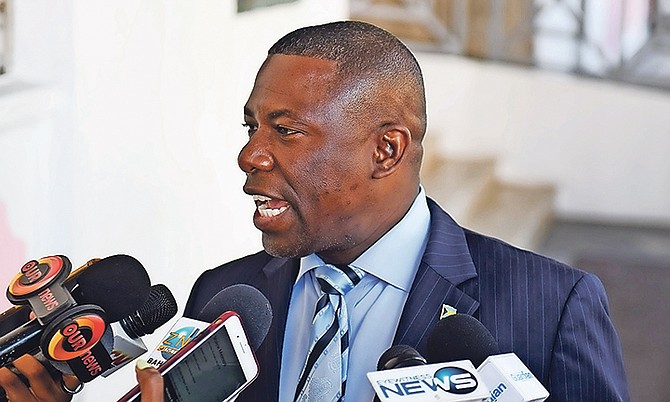 TRANSPORT and Local Government Minister Renward Wells yesterday confirmed an audit of the Road Traffic Department’s new system is underway focusing on apparent discrepancies that could be affecting revenue.

While he would not confirm whether these discrepancies were based on allegations that thousands of fake driver’s licences have been issued, the minister said the audit is looking at the entire department, including licences and franchises with taxi cab and bus plates.

Where there are issues, Mr Wells said they would be addressed.

He spoke to reporters following the morning sitting of Parliament where he was asked if fraudulent driver’s licences were an issue for the department.

Asked to confirm what the discrepancies were, the Bamboo Town MP said he could only confirm officials were looking at the system. He said on a daily basis, the department received reports of potential road traffic infractions.

“Not that we have found that it is taking place, but there are folks that make accusations as to what is taking place and we as is our duty are looking into it and we are seeking to ensure that the Bahamian people get what they are supposed to get.”

The Punch yesterday reported that as many as 8,000 drivers are in possession of fraudulent driver’s licences because they never passed a driving test.

Last year, The Tribune reported that a Road Traffic Department employee was terminated and was expected to face prosecution after being implicated in a forgery investigation centred on several “fake” licences identified by the department’s new $8m automated system.

At the time, Permanent Secretary in the Ministry of Transport and Local Government Lorraine Symonette-Armbrister confirmed the firing. She said there was enough evidence to pursue a case. It is unclear if the employee ever faced criminal charges.

Prior to this Road Traffic Controller Ross Smith confirmed the investigation, insisting at the time, the “ongoing problem” was first noticed in the months following its change in system.

Mr Smith said officials and general staff recognised that several drivers applying for renewed licences in the months since the system change possessed licence cards that either “looked wrong” or exhibited a lack of security details applied to the old cards. He later said that five to six “fake cards” were identified in one week alone.