Police Crack Down After Fatal Crashes 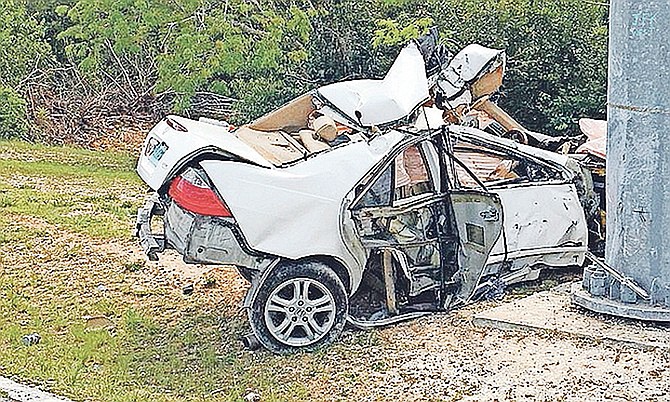 The scene of a fatal crash last Thursday.

NATIONAL Security Minister Marvin Dames is calling for motorists to be more responsible when driving adding police will be more aggressive in enforcing traffic laws.

He also said the government will be investing in expanded CCTV coverage and other technology as a way to crack down on road offences.

Speaking to reporters outside of Cabinet, Mr Dames said the public can expect to see a greater emphasis on education and training relating to road traffic rules and regulations.

When asked when recent amendments to the Road Traffic Act will be enforced, Mr Dames said: “I don’t know if those would have been enacted as yet, probably very shortly but you know, it speaks to the wider issue and certainly the police have been having these discussions and working with other groups to look at, there are any number of components here, you can create all the laws in the world that you want to.”

He added: “This island is seven miles wide, by 21 miles long; we probably have move vehicles per capita than anywhere. (We are) working closely with the Road Traffic Department, you can expect to see, and you are seeing it because the police are writing hundreds and hundreds of fixed penalties (tickets) every week.

“You are going to see public education. As I have said, that is one of the commissioner’s threads, that’s one of his key planks for this year in his plan which I will be laying in Parliament next week, as the focus on traffic related accidents and deaths.”

Mr Dames encouraged motorists to always be considerate of other drivers when on the road.

“I mean you can’t want to go from (the Churchill Building) to Scotiabank and want to push the gas pedal through the floor. There is no room for that in this country,” said Mr Dames.

“But after having said that, the police have acquired new technology in the way of these new more modern speed guns. You can expect, and I’ve been seeing, more officers up and about. They will certainly use the statistics to drive how they do their business.

“But as you can see, we’ve been having these incidents (in other) islands which is certainly a challenge as well, and I was in Abaco last week and there were road checks. But at the end of the day, the responsibility is with the driver and there will be a greater level of enforcement (and) the use of technology.”

The minister said there have been talks about modern speed guns and the request for proposals for more closed-circuit televisions should be going to Cabinet for discussions.

“(That) is bringing on an additional 500 cameras to the complement, and these cameras are five pixel cameras…These cameras have the ability to read licence plates, they will be equipped with analytical software and so, this government is investing heavily.

“And you will see these cameras in main thoroughfares, and we have to tighten-up on working towards keeping our streets safe for all.”

Changes to the Road Traffic Act meant to save lives were passed in the House of Assembly last month.

Transport and Local Government Minister Renward Wells told the House before the passing of the amendments that the government hoped to disrupt increasing traffic fatalities, which are now ranked among the common causes of death in the country.

The amendments will criminalise both the use of phones while driving and driving with an open alcoholic beverage.

Motorists will also immediately have to produce proof of insurance and a driver’s licence upon the request of a police officer.

The changes also require the payment of outstanding traffic offence fines before renewing a driver’s licence.

Driving instructors will further be prohibited from holding electronic devices under the bill but the stipulation will not apply to those driving emergency vehicles or a vehicle that is lawfully parked and not impeding traffic.

The changes have yet to be enacted.

Are they finally going to take enforcing road traffic laws more seriously now? One can only hope. I've been talking about this for a while now.
The reality is unless laws are enforced, nothing will change... (fingers crossed!)

That's the rub...they barely enforce the existing laws...do we really expect the new ones to be miraculously enforced?

Don't need no new laws, just enforce those on the books. But we have all been here long enough to know that all that will really happen is they will do some speed traps for a couple of days, maybe even a week, and thats it. All the time i can guarantee that if there is a traffic light in front of any police station the red is being run at least 10 times an hour.

If you look at recent court decisions, published here, there is a trend...NO license; No Insurance.

Seriously?? Enforce the existing laws and come down hard on uninsured unlicensed people, and vehicles.

It is not the speed so much.

You can start by have a proper driving test. Had my son take three lessons in the country where he was studying. Came back home and took our (Bahamas) test. He passed easily. His words "The test was a joke".

He was to have several more lessons and classroom study to be able to take the test in the country where he was studying. That one was "no joke".

Also lets enforce a requirement that you have tires with a certain amount of tread. Ticket those who fail to signal at least 5 flashes before they turn (Police could make some serious revenue out of that one)

A poorly driven, poorly maintained car is dangerous at any speed.

The whole driver's ed system needs to be revamped ..... and once a person gets a license, it seems to be an entitlement for life ...... how many licenses are suspended each year for traffic infractions?????? ...... But then again, there are probably six-figure traffic violations waiting to be settled in court. That is the crux of the problem.

Have no fear they only enforce the traffic laws in road blocks, policemen drive around all day, sometimes hailing motorists not wearing seatbelts or driving with babies/children in the drivers lap and do not give them a ticket, ah yea only in road blocks.

Nothing saves lives like the police being reactive instead of proactive!!

Bahamian-style ............. CCTV, online fines payments, RTD upgrades, and policing/traffic drones can solve 90% of the road/drivers issues on New Providence ....... but we opt to over-hire and over-buy for VOTES.

"When asked when recent amendments to the Road Traffic Act will be enforced, Mr Dames said: “I don’t know if those would have been enacted as yet, probably very shortly but you know, it speaks to the wider issue and certainly the police have been having these discussions and working with other groups to look at, there are any number of components here, you can create all the laws in the world that you want to.”"

Is this gibberish or just Dames-speak or are they one in the same?

Buy a photo radar van and move it around set fine limit at 10 mph over limit. Politically unpopular only way to control speeding. I have never seen anyone doing 15 in school zone