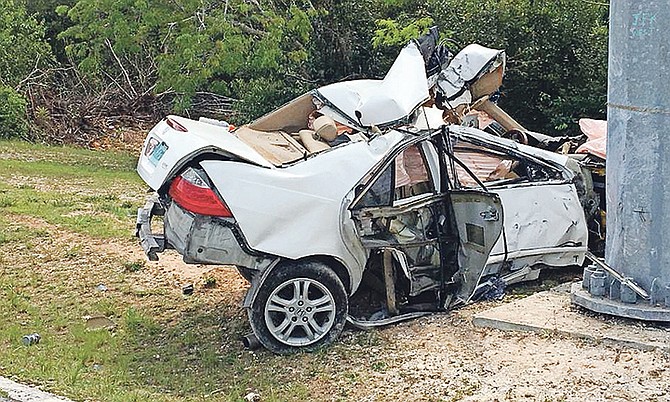 The crash scene on Thursday.

Speaking to reporters at the scene of the incident, Superintendent Mareno Hinds said officers are still in the preliminary stages of the investigation but believe speed may have been a contributing factor to the accident, which culminated in the victim’s vehicle hitting a utility pole. The Tribune understands the victim to be 25-year-old Keshawn Lightbourn, an employee of Mr Ship It.

“On Thursday, April 11, shortly after 10am, the police at Traffic Division were alerted to a road traffic collision on John F Kennedy Drive, just west of the Fusion complex,” Supt Hinds said.

“Upon our arrival at the scene, the police met a 2007 Honda Accord with extensive damage to its passenger side and with front end damage.

“Police also discovered that a male, believed to be in his mid-twenties, on the inside of that vehicle. Unfortunately, this male succumbed to his injuries at the scene.

“EMS were called. They administered what they needed to administer, however he could not be saved. We believe that speed may have contributed to this accident. We are in our preliminary stages of this investigation, but it is too early to tell what caused the accident definitively.”

Regarding the nature of the incident, Supt Hinds said: “We believe that he touched some of the light poles before he came down, colliding into the shrubbery on the southern end of this thoroughfare before ultimately colliding into the high tension utility pole.”

Supt Hinds said the Jaws of Life was brought in, however it ultimately did not have to be used to extricate the victim.

The officer could not say whether there were any signs of distracted driving. When asked if the victim was wearing a seat belt, Supt Hinds could not confirm, however he said officers are examining that “very carefully”.

Supt Hinds also issued safety tips for motorists, advising them not to speed or drive distractedly.

“We always advise our drivers, particularly on this thoroughfare, to wear their seat belts and to not speed,” he told reporters, noting the speed limit on that road is 45 miles per hour - the highest for any road in the country.

“We know that it is a long journey, it is a long thoroughfare, but we recognise that speed does not make your situation better. So we would ask that persons not drive distracted, with cellphones, eating food, fixing hair, or anything that may cause them to lose awareness of what they’re doing as a driver.”

He also addressed the impending amendments to road traffic laws.

“As you are aware, those new regulations have not passed, so we have embarked on an education awareness and enforcement campaign in anticipation that they will be passed very shortly.”

Late last month, amendments to the Road Traffic Act were passed in the House of Assembly after being tabled last September. Lawmakers passed amendments that will criminalise both the use of phones while driving and driving with an open alcoholic beverage. The amendments will have to be passed at the Senate level and then published in a gazette before they are officially enacted and become law.

Road traffic accidents are now the 13th highest cause of death in the country and without legislative changes, the government believes this will continue.

According to National Security Minister Marvin Dames, there were 63 traffic fatalities last year which represented a 29 percent increase from 2017. He said unfortunately, resulting from those 63 accidents were the deaths of 69 victims, reflecting a 28 percent increase from the previous year.

Of the traffic fatality victims by island, 42 of the fatalities occurred on New Providence, 11 on Grand Bahama and 10 on the remaining Family Islands, he said.