Two Years For Part In Attack On Breanna 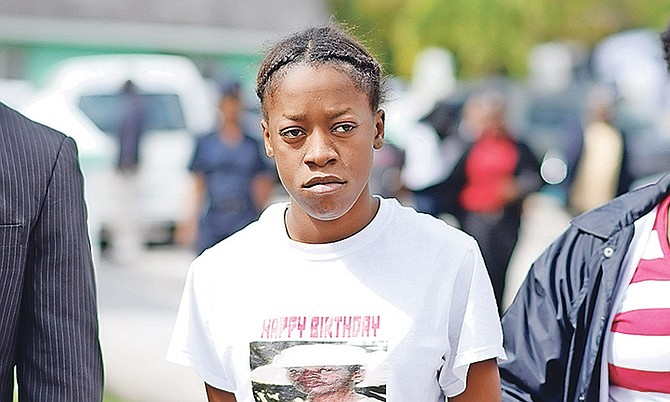 DAVANYA Lawes outside court in January, 2018.

DAVANYA Lawes, one of five women and a minor charged in connection with teenage mother Breanna Mackey’s murder last year, has been sentenced to two years in prison as part of a plea deal.

Lawes, who was previously charged with murder, received the sentence after pleading guilty to causing grievous harm to Mackey during the fatal January 25 incident.

The time Lawes has already spent on remand, a year and some four months, will be factored into her prison sentence.

She is also ordered to perform community service and undergo counselling inclusive of anger management classes.

Lawes is the third person to be sentenced in connection with Mackey’s murder.

Last week, Thea Williams was sentenced to 25 years in prison by Justice Cheryl Grant-Thompson for stabbing Mackey to death last year because she broke her friend’s cellphone.

Justice Grant-Thompson said the time Williams has spent on remand, a year and some four months, would be deducted from the quarter-century sentence, in pursuance of the plea agreement her attorney reached with the Crown.

Williams is further ordered to undergo one year of counselling, inclusive of anger management lessons, and another year of probation upon completion of her sentence. She will be 46-years-old by the time that comes around.

Additionally, an 18-year-old woman whose name has been withheld because she was charged as a minor, was sentenced to 12 years in prison in connection with Mackey’s death. She is also ordered to serve one year’s probation after completing her sentence.

The judge further noted she would ask the commissioner to ensure both women have access to educational opportunities so as to allow them both to be in a position to make a positive contribution to society once they are finished serving their sentences.

The trial for others charged in the matter is set for October, The Tribune understands.

Mackey, a mother of one, was stabbed to death on January 25, 2018, the day after celebrating her 19th birthday.

According to the facts previously read off by prosecutor Cephia Pinder-Moss, sometime around 5.48pm on the date in question, police control room was contacted about reports that a female was stabbed about the body in the Key West Street area off Cordeaux Avenue. A crew of police officers was consequently dispatched to investigate.

Upon their arrival, a female who was identified as the victim’s sister, Latisha Woodside, directed officers to a brown and white two-story apartment complex situated on the eastern side of Key West Street. On the porch, just in front of door number 9, officers discovered a semi-conscious female lying face down suffering from four stab wounds to the upper back and two stab wounds to the right arm.

The woman, later revealed to be Mackey, was subsequently transported to the Princess Margaret Hospital where she died around 8.28pm.