Lucayan Buyers Must Be Freeport’S Atlantis 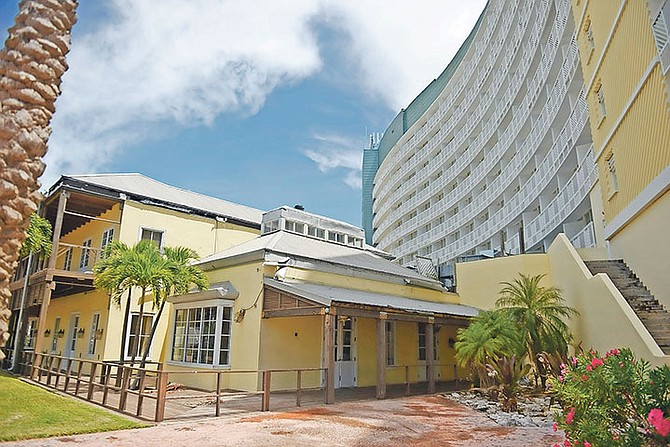 The Grand Lucayan’s new owners must have an Atlantis-type impact to relaunch a destination that will have been “off the market” for at least four years, a Freeport hotelier warned yesterday.

Magnus Alnebeck, Pelican Bay’s general manager, told Tribune Business that the ITM/Royal Caribbean joint venture needed to have the kind of effect on Freeport that Sir Sol Kerzner achieved in the mid-1990s with Paradise Island’s rebirth if the city is to re-establish itself in the global tourism marketplace.

Pointing to a little-noticed aspect of their deal, Mr Alnebeck said October 2019 will mark the third anniversary of the Grand Lucayan’s post-Hurricane Matthew closure and the loss of some 1,000 hotel rooms and 500-1,000 jobs.

The government has indicated that it will likely take between four to six months to close the Grand Lucayan’s $65m sale, and a Heads of Agreement, with the ITM/Royal Caribbean consortium which potentially pushes the likely completion date out until end-2019.

The Mexican port developer and cruise line have said the $130m first phase investment will cover a 24-month period, meaning that a revived Grand Lucayan - complete with water-based theme park and associated retail, gaming and restaurant amenities - may only be ready to receive its first guests come winter 2021.

That would create a near-five year interval between the closure of two of the Grand Lucayan’s current three properties, and Freeport’s effective disappearance from the mass market tourism map, and its return - a huge gap that will have to be bridged.

Mr Alnebeck, who estimated it may take a year from the deal’s closing to restart substantial operations, said many persons were “dreaming about quick things” happening in the letter of intent’s (LOI) aftermath when clearly that will not be the case.

He added that ITM/Royal Caribbean will face “a similar thing” to that encountered by Sir Sol and Kerzner International when they relaunched the Nassau/Paradise Island tourism product with Atlantis in the mid-1990s.

“It’s kind of critical that when they come in they understand they have to be the catalyst for getting new people to the island,” Mr Alnebeck told Tribune Business of the Grand Lucayan’s prospective purchasers.

“It’s a total repositioning, relaunching of the destination. In November, it’s going to be three years since close to 80 percent of the hotel rooms were closed, and that’s a long time to be away from the market.

“Once they have their plans, I doubt we’re going to see any new product, and new rooms, for at least a year. A lot of people are dreaming about quick things, driving down the Lucayan Strip one morning and seeing a sign that says: ‘Open for business’. It’s going to take more than a year, and possibly two.”

The Pelican Bay chief added that ITM/Royal Caribbean are effectively being charged with rebuilding Freeport’s land-based tourism product from scratch given that the island was estimated to have lost 59 percent of its room inventory with the Grand Lucayan’s closure.

“If you look back to Nassau, and that was much bigger and our economy much smaller, but it’s equivalent to when Atlantis demolished an old tower, built a new tower and opened up in 1994,” Mr Alnebeck told Tribune Business.

“They came out with a new, fresh product and started marketing all over again. From a relaunching, rebuilding perspective, it’s a similar thing here.”

The ITM/Royal Caribbean group is aiming to create 2,000 new jobs in its first phase by bringing in an extra two million cruise passengers to Grand Bahama every year, transforming the area into “a world class destination”.

As previously detailed by Tribune Business, which exclusively revealed the joint venture and its plans for Freeport in early February, the proposal focuses on developing water-based adventure theme parks at both Freeport Harbour and around the resort. The Grand Lucayan will be upgraded to “five-star hotel accommodation”, and feature multiple gaming, entertainment and restaurant experiences.

Although few specifics have been released, their plans envision combining Port Lucaya and Freeport Harbour into a “unique destination” that will set Grand Bahama apart from its competitors, not just Florida and other Caribbean nations, but Nassau/Paradise Island and the Family Islands.

Mr Alnebeck yesterday said it was impossible to judge ITM/Royal Caribbean’s plan because so little details were know, although he added it was vital to rebuild airlift to the destination - rather than just rely on cruise passengers - when the new resort opened.

He added, though, that the deal likely contained extra complexity because it involved two elements - the Grand Lucayan and Freeport Harbour. While the former was owned by the Government, the latter is held by a 50/50 partnership between Hutchison Whampoa and the Grand Bahama Port Authority’s (GBPA) Port Group Ltd.

Besides purchasing the hotel, Mr Alnebeck said ITM/Royal Caribbean will also likely have to secure a lease for Freeport Harbour with Hutchison and Port Group Ltd if it is to fulfill its plans to increase the number of cruise ship berths.

“It’s too early to say how it’s going to affect us because no one has seen what they business model, plans and marketing strategy will be,” the Pelican Bay general manager added. “The reality is that any activity should have a positive effect on Freeport at the moment. Anyone wanting to invest money on the island is good.

“The effect here so far is people are more positive. People feel there is some light at the end of the tunnel.” Mr Alnebeck confirmed that Pelican Bay was “doing fine” thanks largely to its corporate business, in particular from the Grand Bahama Shipyard, but leisure visitors had all but dried up.

He added that until ITM/Royal Caribbean confirmed the nature of their product there was little hope of rebuilding airlift into Freeport given that there were simply insufficient rooms to accommodate even minimal demand.

“That will have to wait until we hear what their plans are,” Mr Alnebeck told Tribune Business. “I’m not sure what the business model is, and how much they will bring in by cruise ships and overnighting.

“I think it’s [rebuilding airlift] essential unless they’re planning on bringing everyone in by ship. To ask for more airlift at the moment is not viable because we do not have the hotels to put people in.”

This man is talking sense. It is to bad that the FNM Government has chosen not to tell the Bahamian people the true facts.

They tell lies and build pies in the sky,

Stop being so political. There are no details to tell until the Heads of Agreement is signed.

Tell that to Scott, D'Aguilar and Minnis! LMAO

I think this is a huge leap for Grand Bahama as it will help strengthen their economy and eventually create the many jobs that were loss.

The two elements are important. How can Caribbean cruise line redevelop The Freeport Harbor or the Port Lucaya it does not belong to them.

I think this is a positive step towards recovery for Grand Bahama. Grand Bahamians need to understand this venture will take time in order to create a great product.