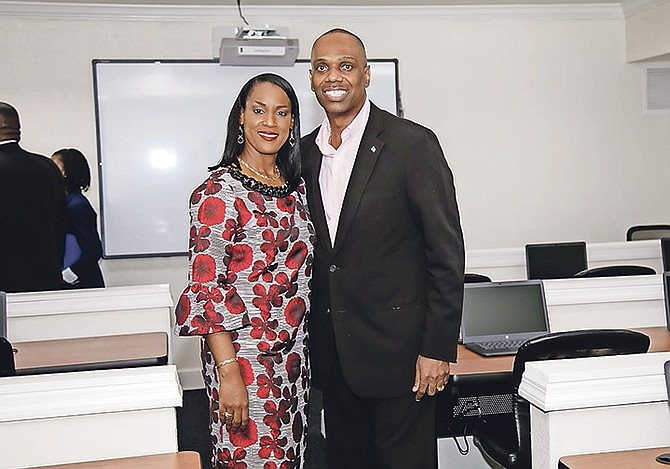 THE Rev Frederick McAlpine, MP for Pineridge, and his wife Tracey in one of the classrooms at his recently opened Pineridge Education Centre.

THE REV Frederick McAlpine, MP for Pineridge, officially opened the Pineridge Education Centre in the Kipling Building in Grand Bahama on Monday, delivering on a promise he made to his constituents.

The centre, which has an enrolment of 50, allows students to learn in a "technology rich" environment. On completion of their studies, the students will receive a high school diploma.

Although Rev McAlpine had sent invitations to all FNM MPs on Grand Bahama, none had attended the event.

"I am so glad that my brothers flew from Nassau," he said. "I want to go on record, I invited every MP in GB and senator, but all happen to be extremely busy, but I want to thank them for giving me a 1,000 more votes," he said.

"But I want to say the only reason that Travis (Robinson) is not here is because since he was terminated he decided to go back to school, and he had two exams that he really could not get out of."

The Pineridge Education Centre was a vision that Rev McAlpine had shared with constituents a year ago during a constituency meeting last September after he first broke ranks with his party.

Mr Chipman commended Rev McAlpine for standing up for the people of Pineridge and for what he is doing to transform the lives of people in his constituency.

"Today, I am here to support the efforts of my colleagues and his team with regards to his thrust for education, his working toward a unified Grand Bahama and a unified Bahamas, and more importantly, I want to support him, and encourage him in his progressive politics," he said.

"As we moved forward in this country, we would need to appreciate each other, respect each other, and understand that no, we all are not here to think the same way. God gave all of us talents and all of us ought to use those talents."

Acknowledging the presence of former Ambassador Moore and Mr Thompson, the MP for Centreville said: "I singled them out for a minute because Sir Cecil Wallace-Whitfield spoke of this many years ago: the right to be an individual, the right to be independent, the right to express your vision, however and in whatever way your vision is. But most importantly the right and privileges of democracy."

Mr Chipman noted that he and Rev McAlpine now share a connection.

"When this young gentleman stood in Parliament seven seats to my right and stood for the people of Pineridge and stood for the people of the Bahamas, that meant a lot to me. I wasn't sure whether the connection was in his independence, his ability to represent people, or in the no vote that we did in the value added taxation. I voted no to VAT taxation and I will stand on that," he said.

Mr Chipman noted that he also asked for a Select Committee of the House of Assembly to investigate the country's natural resources and the funding that should be going into the Sovereign Fund.

"With this in mind, we strive towards a country that is self-sufficient. Parents should not be holding three jobs in order to put their children through school,"

He stated that many students are out of the school system without a diploma because parents are out working three jobs to make sure they are able to feed their children.

"Today with visionaries like McAlpine we have the opportunity to bring back those things that we lost and were not be able to provide for our children."

When asked about absences of four FNM MPs in Grand Bahama at the opening of the centre, Mr Chipman said: "The thing is we all have our way of politics, and I can only assume that they are very busy and not able to attend due to their busy schedules.

"I would not want to make any comments as to why they are not here. What's important is that I am here to represent what is referred to as progressive politics, thinking outside of the box to be more creative in terms of what we can do to make this country a better place," he said.

When he spoke, Mr Miller said he believes the opening of the Pineridge Education Centre is significant.

"I am honoured to be part of historic gathering, It is a momentous occasion when all of us as Bahamians in general, Grand Bahamians particularly, should be proud," he said.

The facility prepares students to sit the national BJC and BGCSE exams. Classes are Monday to Friday from 9am to 1pm. There are five core subjects: bible, science, history and geography, mathematics and language arts. Students must complete 21 credits to receive their diploma.