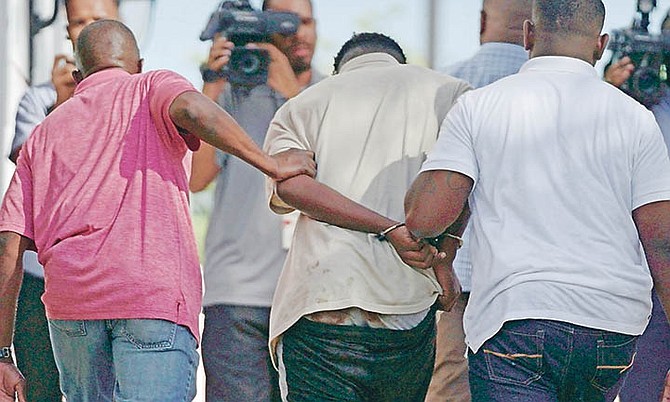 A teenager who was allegedly flogged with a cutlass by police officers prior to being arraigned on numerous armed robbery charges has since been charged with assaulting a police officer and resisting lawful arrest.

Alvin Morley, 19, was charged on November 14 with assaulting Detective Corporal 3880 Frazier and resisting that officer’s arrest on November 2, a week after being arraigned on multiple armed robbery charges and an attempted murder charge.

The Lincoln Boulevard resident pleaded guilty to both charges and the trial is set for January 24 next year.

Earlier this month, Morley’s attorneys claimed he was beaten with a machete by officers at the Central Detective Unit (CDU). As Morley stood in court his blood-stained underwear was exposed for all to see, including Chief Magistrate Joyann Ferguson-Pratt.

The back of Morley’s grey boxers was spotted with apparent dried blood stains, as well as what appeared to be brown and green stains.

When the teenager was ordered to come forward and face the litany of charges against him, his trousers, which by that time were already hanging low, fell down completely, exposing his soiled underwear.

When the chief magistrate noticed the man’s boxers and asked about them, and as Morley did his best to pull up his pants while handcuffed, his attorney Ian Cargill responded: “That’s blood. That’s how bad he was beaten.”

Morley refused to sit down when he first walked in court despite being commanded to do so by officers, citing the pain from his injuries as the reason. And when he was later told that he had to sit down by the chief magistrate, he had to lean to the side and prop himself up with his right elbow to alleviate the pressure.

David Cash, Morley’s other attorney, said when he went to visit Morley on Monday before his arraignment, the young man had “fresh injuries” and was bleeding, and further complained of injuries to his buttocks.

However, Mr Cash said when he asked for an opportunity to see his client’s injuries, a police officer told him he could not do so unless he brought a doctor to CDU. Afterwards, Mr Cash claimed his client was taken in the back of the CDU compound while he was made to leave.

Mr Cash said his client was denied his right to have private communications with his attorney, in contravention of Article 19 of the Constitution, as two officers constantly “flanked” Morley during the time he went to see him.

Morley was one of three men accused of being the perpetrators of multiple armed robberies and other serious crimes in New Providence over the last two months, the other two being Javis Smith, aka “Bobo”, and Deon Giles, aka “Lebo”, both of whom also claimed they were beaten while in custody.

Morley is also alleged to have attempted to murder Roobens Elusme on October 6.

Police also claim he used a rifle on October 1 to rob Police Constable 3629 Mills of $80 cash and a set of keys as well as Earthlyn Pratt of one silver and black coloured Samsung 7 Edge worth $500 and a brown wallet worth $100, which had $130 cash in it when it was stolen.

He is further alleged to have robbed Amanda Walkine of a pink and white Apple iPhone 6 worth $500.

Morley is accused of committing the crimes with 20-year-old William Wong of Regency Park, who was arraigned in connection with those incidents last month.

Morley, Smith and Gilles were further charged with robbing Brittney Bethel of a black 2008 Toyota Passo worth $4,500; a white ZTE cellphone worth $120; a Thunder Dog battery pack worth $75; a Bahamian passport worth $50 and $200 cash. They are all charged with Wong in that matter.

However, Mr Cargill told the chief magistrate that Morley had provided documents to the authorities to show that he was not in the jurisdiction at the time Bethel was allegedly robbed.

Morley, Smith, and Gilles were also charged with conspiring to commit armed robbery on September 17, and then attempting to rob Pizza Hut’s Prince Charles location with a handgun a day later.