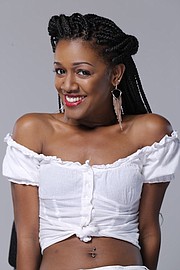 A FORMER Bahamian beauty queen’s copyright lawsuit against the Ministry of Tourism “falls woefully short” and should be dismissed, the Government agency is demanding. The Ministry, in its March 19 response to the action filed by ex-Miss Bahamas Universe, Khiara Sherman, alleged that she and her record company had failed to identify the advertisements that used her Fly Away With Me song without permission. Without specifics on the claimed violation, the Ministry of Tourism is arguing that it is “unable to defend” itself against the lawsuit by Mrs Sherman and AK Fortyseven Records, thereby giving the southern Texas district court sufficient grounds to dismiss the action.

The Ministry is also employing a similar argument against Ms Sherman’s second allegation, which involves the purported breach of her $130,000 employment contract, arguing that she has also failed to provide sufficient evidence to “state a claim”.

Bidding to knock out Mrs Sherman’s lawsuit at the first attempt, the Ministry of Tourism said: “In July 2014, plaintiffs [Ms Sherman and AK Fortyseven Records] allegedly published a musical work entitled Fly Away With Me.

“Plaintiffs allege in their complaint that the Ministry of Tourism engaged in copyright infringement by airing advertisements that used the song Fly Away With Me without permission. Plaintiffs claim that the Ministry ‘reproduced and distributed a verbatim copy of Fly Away With Me in conjunction with a co-ordinated advertising and media campaign, including a high-dollar television commercial and postings on YouTube’.

“This factual background is drawn from the complaint. The Ministry disagrees with many of these assertions.... Plaintiffs do not identify a single Ministry advertisement or Ministry commercial that used plaintiffs’ song, and plaintiffs provide no links or other directions for locating them.”

Mrs Sherman and her attorneys previously e-mailed Tribune Business a 12-second video which purported to show the Ministry of Tourism using her song in its paid advertising campaigns.

The video seemingly shows the use of her song, Fly Away With Me, in a TV commercial, which features several bikini-clad models splashing around in the clear-blue tropical sea. The Ministry of Tourism’s Bahamas logo is visible on the screen, and the commercial ends with the catchphrase ‘Find Your Splash Zone’.

The line ‘The Islands of the Bahamas’ is also present, together with the Ministry of Tourism’s logo, the bahamas.com address and contact information. The sound on the clip is patchy, but the words ‘Fly Away’ can just about be made out.

The Ministry of Tourism’s legal filings, though, argued that Ms Sherman and her record company had “not pleaded sufficient facts” to show it had violated her copyright and used the song without their permission.

“Plaintiffs’ allegation that the Ministry used Fly Away With Me in an unidentified ‘advertising and media campaign’ amounts to nothing more than an allegation of purported harm without supporting facts. Indeed, the facts needed for the Ministry to locate and view the allegedly infringing commercial are completely missing.”

Arguing that the southern Texas court should dismiss the case on these grounds alone, the Ministry of Tourism added: “The Ministry cannot properly defend itself without knowing what plaintiffs believe it did wrong.

“The Ministry has been forced to expend resources trying to locate the allegedly infringing work - a work that plaintiffs presumably have in their possession but have chosen not to share.

“Through its own search (which it should not have had to undertake), the Ministry has identified one of Ms Sherman’s own marketing brochures in which she boasts about the use of her song in an advertisement by an airline called Bahamasair,” the Ministry’s attorneys, Hogan Lovells, continued.

“The complaint does not direct the Ministry or the court to any identifiable act of infringement that would reveal the grounds upon which plaintiffs’ purported copyright claim rests. This omission is plainly insufficient, and the court should dismiss plaintiffs’ copyright claim.”

Mrs Sherman, who once represented the Bahamas at the global Miss Universe pageant then-controlled by US president, Donald Trump, is also alleging that the Ministry of Tourism breached an employment contract that was agreed when the former Christie administration was in office.

She claimed the Ministry offered a three-year contract that was to pay her $113,160 directly, and result in other benefits worth at least $15,000.

But the Ministry of Tourism this week hit back by arguing that Mrs Sherman had failed to prove “the existence of a valid contract”, or even a valid written agreement between the parties.

It added: “Material elements, such as when and where Ms Sherman would perform, and what she would do, are absent. Also lacking are any factual allegations suggesting a meeting of the minds; whether each party consented to the contract’s terms, and the execution and delivery of the contract with the intent that it be mutual and binding on the parties. These omissions -individually and collectively - are fatal.”

The Ministry of Tourism argued that it would be “futile” to permit Mrs Sherman and her record company to amend their claim, and concluded by requesting that the Texas court dismiss her claim.