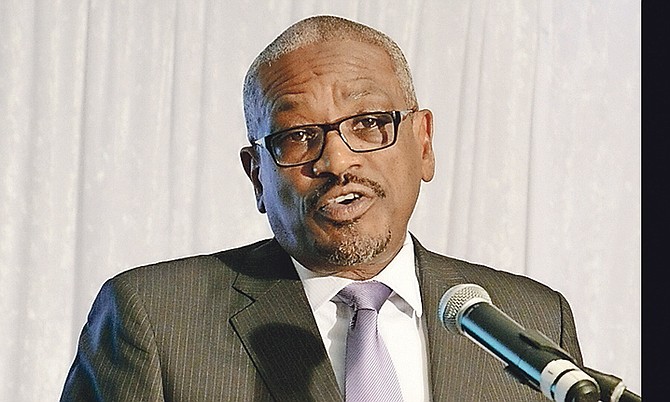 PRIME Minister Dr Hubert Minnis again accused the Christie administration of being corrupt, telling the House of Assembly last night he has heard that some foreign investors have been hesitant to do business here for fear of being asked for a “so-called incentive”.

Dr Minnis also hinted that scandalous information about the previous administration will be revealed next week when an anticipated report into the Water and Sewerage Corporation will be tabled.

His comments came as he wrapped up debate in the House of Assembly on the Proceeds of Crime Bill and the Financial Transactions Reporting Bill, laws meant to clamp down on corruption and crime.

He said the government’s aim was to reduce domestic corruption as well as hinder any international groups who seek to use The Bahamas for nefarious means.

“Let me start by strongly rejecting the false equivalence that there is no difference between the FNM and the PLP –- there are clear differences, Mr Speaker, which some who should know better are conveniently forgetting,” Dr Minnis said.

He said the corruption of the past five years was a “national disgrace” that should never be allowed again.

“I have listened to stories and reports of investors staying from the Bahamas because they feared of being asked for a so-called incentive to do business in the Bahamas,” he told the House of Assembly.

“Official corruption retards and hinders national development,” Dr Minnis also said yesterday. “Such corruption hinders our progress as a country. Investments by domestic and foreign investors will be decided by merit under this administration. We are already attracting new investment and interest because we are distinctly different from the former administration.

“Lest we quickly forget, the former administration gave millions of dollars of untendered contracts, including road works and other projects in Andros. On the watch of the former minister of works and the current leader of the opposition, a number of individuals were granted for construction contracts at BAMSI despite not meeting certain requirements.”

Mr Davis then rose to respond to this, saying there is “nothing inherently wrong” in awarding a contract without going to tender, once best practices were followed.

“The member for Killarney is now suggesting that I would have done something that is not in keeping, under my watch,” Mr Davis said. “I wish for him to identify, because there’s nothing wrong per say in awarding a contract without going to tender. They have done it and are doing it today. They just did it.”

Dr Minnis also questioned if there was corrupt intent behind the Christie administration entering into a “lifetime” contract with a worker with a clause that states three years’ notice was needed before the agreement could be terminated. The Bridge Authority contract, previously reported on by The Tribune, had no fixed end date. He said he hoped the case is taken to court.

“You give three years notice for a contract, that’s normal?” Dr Minnis asked.

“The member for Killarney spoke about a lifetime contract clearly there is nothing he read that supports that assertion,” Mr Davis said. “It does have a termination clause which speaks to the fact it’s not a lifetime. It is, I accept that a termination period of three years may not be a normal term period, but one has to understand the circumstances under that was agreed. With victor’s justice being exerted by the government and on hindsight, I now can opine it was probably a good thing to have the three-year term clause, (because) the person in question would have been terminated summarily as have been so many. . .”

Mr Davis said he has also learned he is named in the WSC forensic report, but no investigator has spoken to him about the matter, something he called “unfair.”

that might well be , but monentum has been lost for lack of action as no one hears about prosecuting polititicians any more.

and, this cannot top the headlines as desperation caused this whol HOA thingt with OBAN.

Mind you the tribune called it desperation, however the february 27th has not been posted to the site, only the printed paper.

Its good he understands that corruption retards the growth and development of a country, so the question is, can we rely on him to shut down these community destroying number houses? It is the economic rape of many to the benefit of a few!

Hubert Minnis has used the term PLP so much in his contributions to the house; when he speaks it mirrors a PLP rally where PGC is about to give the finger.

This rhetoric of constantly referring to the previous administration and the PLP is becoming unexciting, exhausting and tiring.

If there are no criminal charges to come, then the extra fanfare is unnecessary. Speak through your policies. Put the laws in place to ensure corruption is arrested or that we are at-least headed in that direction, ensure that you are not in contravention of the laws yourself Minnis, and get on with running this country.

If Minnis mentions the PLP one more time, I think it is fitting that everyone votes PLP in the next election as it is appears this is his desire.

KICKBACK DEMANDS OBVIOUSLY DID NOT KEEP THE SCOUNDRELS BEHIND OBAN ENERGIES AWAY!!

Ma Comrade Prime Minister, you preaching choir long converted over to a corrupted PLP government - never the less you can talk up House until the graveyards dead begin listen to excuse after excuse but it won't alter single mind thousands citizens and residents alike - who see you when doing any kinds business with likes Oban - as desperate act picking foreign investment fruits from low branches lacking credibility. I mean, Mr. PM, how low a pick is there still left pick from? If the public records are correct - I wouldn't be using kickbacks and the people around Oban in same light credibility breath. PM, are you a Donald Trump who reads nothing - including public court and securities policing records? PM, you owe nation a serious apology best delivered by your resignation from PMO.
Amen!

I have to give credit where it is due. Tal, you are right, on this.

Where are all these investors doc claims did not come under the PLP government. is he talking about Oban? where are the others?. Those fellows saw doc coming. It is said when you Dumb you are dangerous. doc lies a lot. the Donald Trump of the Bahamas.

considering this fat fluck oban seems to be the only investor you have enticed to invest it would appear to be alot more then the PLP sitting around with the hands out.....granted they are detrimental it must be something else if in (1) year this is all you can come up with....

They will forget and it's your fault for not keeping these logs on a accountability gov site.

It's common knowledge that for whatever you want to do in the Bahamas you need to have your little stash of 'incentive' money to speed up things. If you don't have it they'll run you dry...