'Tough Choice Is Best For Country' 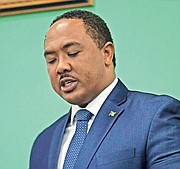 THE Minnis administration may pay a political price for its value added tax hike, but it is better to pay that price than face the ramifications of not making the hard decisions, St Barnabas MP Shanendon Cartwright said yesterday.

As he made a case for his support of the 2018-2019 budget, Mr Cartwright yesterday told Parliament he does not like the VAT increase, but the decision to do so among others will result in a better Bahamas.

"I believe that the members opposite love this country just as much as us," the Free National Movement member of Parliament said. "I will never question that and I will never engage in anything that suggests that they don't because I believe them that the tough decision that the former administration had to make in 2015 on the implementation of VAT was a tough decision. They did it because they loved the Commonwealth of the Bahamas and they thought it was in the best interest.

"Likewise the hard choices that we have to make in this budget is for the future of the Commonwealth of the Bahamas and is gladly a choice I will make."

He continued: "Mr Speaker, I am going to be very direct with this. Maybe there will be a political price for the hard choice that has to be made. Maybe I will have to pay that political price, but I tell you this: I would rather pay the price than the heavy price that the Bahamian people would have to pay should we not make that choice.

"I saw some strong words levelled at the hard choices we've had to make in this budget. I am obligated as a son of this Bahamian soil, as a representative of 5,148 Bahamians in the constituency of St Barnabas, as a member of this honourable House, to do not what is politically convenient, to do not what is easy but to do what is right for those 5,148 constituents in St Barnabas," he said.

"Not to act in this moment would be to use those strong words - treacherous, reckless and dangerous. Whenever my season is up in this honourable place, I want my God, my daughters, the people of St Barnabas, Bahamians everywhere and my conscience to note that I not only served but I succeeded on behalf of the Bahamian people."

Both MP's support for the budget and the higher VAT rate falls in line with the narrative from the Minnis administration that not doing so would result in higher deficits in the coming years. The decision was made in response to the need to pay down on the national debt, government officials have said.

On Wednesday, Prime Minister Dr Hubert Minnis said his job was to "save the country" when he was asked if he were concerned about losing political capital because of the VAT decision.

However, he dodged responding to questions regarding complaints about the government's lack of consultation on the move, which also saw some Free National Movement members of Parliament left in the dark on the decision.

"You'll get everything when I speak," was the prime minister's reply to these VAT related questions.

The government has been the target of intense backlash over its decision to increase VAT from 7.5 percent to 12 percent since Finance Minister Peter Turnquest made the announcement last week.

The "1829" constituents St Barnabas voting in Comrade "Red Shirt" Shanendon as their House MP - might be thinking before jumping congratulate PM's agreeing 12% VAT, it would've been much more productive had their own MP, asked PM Minnis to reveal his prime ministerial delegations Travel bill since 10th May 2017...... Rumour has it costing PeoplesPublic purse $500,000... And who owns private aircraft's red shirts politicians ans government officials been flying aboard, for Free? The "1829" constituents, cannot afford a 12% VAT, sprungs on them by their MP.

Mr: Cartwright this will be your first and last time in the house. you have no political future, How can you agree to increase taxes on the poor people who voted for you. and call the name of God. the poor people will suffer. but again this is what they voted for.

"The value-added effect is achieved by prohibiting end-consumers from recovering VAT on purchases, but permitting businesses to do so. The VAT collected by the state is computed as the difference between the VAT of sales earnings and the VAT of those goods and services upon which the product depends. The difference is the tax due to the value added by the business. In this way, the total tax levied at each stage in the economic chain of supply is a constant fraction."

If Government did not credit back the tax paid out by the big business tax collectors, perhaps they would have sufficient to run the country without the increase. If big business felt the effect of the tax, many would be less lackadaisical towards the increase. This way it would not just adversely affect the working class and the powers that be might think twice about biting the hands that feeds them!

By rebating the VAT to business it stops big business from cheating on custom duties ,,if the pay and bribe to under value shipments they get lees vat return

No research could possibly uncover any Comrade PeoplePublic anywhere on globe who have so quickly turned thumps down on the very political party they had only voted in mere 365 plus few days back. MP Shanendon's "1829" constituents, fall well within the common factors of 91,409 you will keep hearing me post about. The 1829" constituents are to become his political future nightmare.... And so should other 34 red MP's, be constituents alarmed. There is a real growing danger, if the 91,409 constituents are preparing revolt by putting on their Protest boots. Remember, even Papa Hubert's security detail had surround him escort Comrade PM for the short dash back his policeman's chauffeured car, parked but mere feet away from front door House of Assembly.

Most of the infrastructural upgrades such as airports, ports, major roadways, telecommunications and internet services are mostly to support the tourism industry. This industry is suitor generate sufficient revenue for the government to constantly upgrade these systems and maintain them. But unfortunately, government continues to ignorantly exclude this sector from its equal share of taxes. So the taxes that are collected from Bahamians that should go for roads and schools and hospitals go towards these projects. And when a foreign tourist comes here and lays up in a suite in Atlantis, or gambles in the casinos that Bahamians are banned from gambling, or even laying out on the pink sand beaches in Harbor Island, working Bahamians are helping to pay for that vacation. How long will we be the tail and not the head?

every time a visitor eats food that duty has been paid on he is paying our taxes ,,plus vat is on their hotel room ,,meals etc etc

12% bc I love you. What an abusive boyfriend.

Will we then be reducing it again one whatever is met?

I am so tired of this and don,t understand why people don,t get it .For 35 years we have been borrowing to afford a grossly overstaffed civil service and massive corruption .It was estimated w all the crooked business people and corrupt customs officers we were only collected forty percent of duty /tax/ ..We have 1 in 4 people working for government ,,geez Bahamasair have over 100 per plane when the industry average is 23 per plane .Unless you want to send half the civil service home and see misery ,crime and mayhem sky rocket ,,IT IS TIME TO PAY THE PIPR ,,