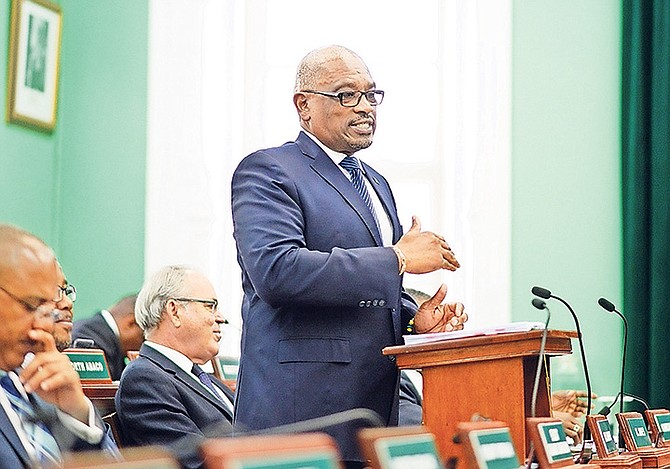 PRIME Minister Dr Hubert Minnis does not appear concerned about losing political capital because of raising VAT to 12 percent.

"I have said before my job is to save the country," Dr Minnis said yesterday when The Tribune asked him if he was worried his administration would suffer politically due to the VAT increase.

He dodged responding to questions regarding complaints about the government's lack of consultation on the decision, which also saw some Free National Movement members of Parliament left in the dark on the decision.

"You'll get everything when I speak," was the prime minister's reply to these VAT related questions.

The government has been the target of intense backlash over its decision to increase VAT from 7.5 percent to 12 percent since Finance Minister Peter Turnquest made the announcement last week.

The Tribune reported Tuesday the prime minister reportedly told a Cabinet minister it is "better to lose an election than to lose a country".

Those words came in a private conversation with Health Minister Dr Duane Sands, who has defended his pre-election political stance, and that of the Free National Movement, against VAT.

Meanwhile, a source told The Tribune the government is considering reducing the VAT rate if it can achieve set targets over the next three years.

The source explained the short-term goal was not to pay off the debt but to bring in a surplus budget that would allow the government to start paying down on its debt.

Mr Turnquest said this was indicative of the government choosing not to wait until it is too late to shore up the economy, but opting to act now and act responsibly.

Ma Comrades, translation provide for purposes the 91,409 voting in 35 red shirts 10th May 2017 - we don't care F--- what you thoughts about 12% VAT, that's why no advance consultation nor notice given.

"I have said before my job is to save the country," Dr Minnis said yesterday when The Tribune asked him if he was worried his administration would suffer politically due to the VAT increase.

This imbecile seems deranged and is possibly suffering from a 'God-like Complex'. He wants us to think, as he does, that we elected him to be the Almighty Saviour of the Bahamian people. Our clergy can attend to that aspect of our well being. We just want him to do what he promised he would do, i.e. govern sensibly and fairly, and in the best interest of our nation and its people. Minnis's head is clearly not well which should give us all great pause for concern.

Here here. . .show these dumb political hacks what good wholesome government representation is like. . .the nation is first. . .doc best interest comes later. . .or not at all. . .THIS IS SOMETHING NEW FOR YINNA DUMB POLITICAL HACKS!! So until doc learn to be a "slick" politician and turn slimy like yinna two, keep it up doc. . .clean this mess up!!!

Even the people's time voters know by now that PM Minnis lies, and lies some more. BAH MAR the Chinese VAT. The spy bill. he lies for every thing every time he opens his mouth he is lying.

No doubt he is calm. Because only a TRUE LIAR , lies to himself, He even lied about the OBAN signing,

VAT will never be reduced just another LIE. doc now sees himself as a Savior. who will save the Bahamas. doc seems to be loosing it and fast. some one should seek help for him ,

I agree completely with LICKS2. A real PM who cares about the people is something Bahamians ain't used to. They all think the sky is falling now and everyone will go bankrupt. LOL.

And ma comrades, you thought the 91,409 voting for the dreadful 35 red shirts go sit up in House are fed up...... now it seems the 'better to lose an election than to lose a country" prime minister has too grown tired finishing his governing mandate? { No making this stuff up }.

Perhaps we all should be a bit more understanding of what the term democracy entails. No, not just parliamentary procedures, I mean the very essence of what democracy is. Minnis doesn't even come close to understanding his responsibilities as a representative of "The People." Not even close.

Shame the FNM didn't put some anti-corruption legislation in place 25 years ago when they first got in power. They need to set up legislation and make it ILLEGAL for banks to keep lending money and/or buying government bonds outside of strict monetary guidelines. Or we are just going to keep sliding off the face of the earth like all the other third world countries that are incapable of demonstrating their own fiscal discipline