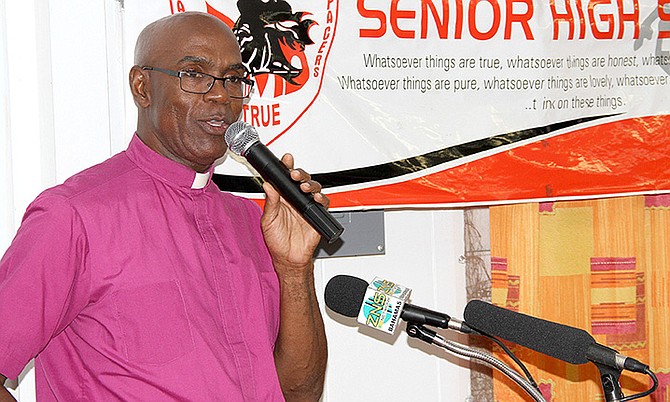 THE process for bestowing National Honours, which leaves the final say up to the prime minister, should be revisited, Anglican Archdeacon James Palacious said yesterday.

At the same time he said he agreed with many that Sir Roland Symonette’s posthumous award of National Hero did not fall in line with the National Honours Act 2016.

Speaking to reporters yesterday, the acting Christian Council president further knocked the decision to award the late Sir Cecil Wallace Whitfield the same award. He said if anyone should have been honoured a National Hero outside of Sir Lynden Pindling and Sir Milo Butler, it should have been former Governor General Arthur Dion Hanna. He stressed these were his personal views, not necessarily those of the Christian Council.

Mr Hanna received the honour of the Order of the Nation alongside 11 other people.

Nonetheless, the controversy that has erupted over the conferring of the honour to the former premier signals it is time for the country to have a discussion about race, Archdeacon Palacious said.

“It’s extremely unfortunate that the first time we are having a shot at these Bahamian awards, it is shrouded in such controversy,” he added. “

“I’m extremely sad. I wish we could have gotten it a little more right and, of course, this is an area where there is a lot of politicisation and polarisation.”

“(Sir Roland’s) was obviously a regime that did not consider properly the rights, goals and aspirations of the masses of the Bahamians.

“If anybody else was to be included in this, if you had to make it more than than Sir Lynden, then it probably ought to be A D Hanna in terms of somebody who fought specific policies (and) worked hard through the ‘Bahamianisation’ process. And, of course, Sir Milo, we all know his contribution.”

While many have been incensed by the decision to name Sir Roland a national hero, Archdeacon Palacious said Bahamians may have already forgiven the former United Bahamian Party leader for what some have termed the racist positions of his regime.

“Please include that because that tells us who we are as a people. At that point the Bahamian people determined that they would move beyond what had happened in the past. Not that it is not a fact, you can’t rewrite history, but in terms of forgiveness and permitting a Symonette to serve in the second highest position... the Bahamian people voted overwhelmingly for that to happen. It has happened and Brent Symonette served very well then and he’s serving very well now.

“So while his father presided over a regime that did not work for the liberation of the masses, Bahamians generally, I would like to think, have moved beyond that but the realities of the past are still the realities.”

Asked if he thought the process should be revisited after it was revealed Prime Minister Dr Hubert Minnis made the decision to award Sir Roland as the National Honours Advisory Committee did not receive an application for the former premier, Archdeacon Palacious said: “Yes I think it should and this is a good reason for it to be.”

His arguments in this regard fall in line with Section 9(5) of the National Honours Act 2016.

It states: “In determining the eligibility of a person…the Advisory Committee shall have regard to whether that person has made a seminal contribution to the Bahamas and which contribution has altered the course of the history of the Bahamas in a positive way; has given service to the Bahamas which has been exemplified by visionary and pioneering leadership, extraordinary achievement and the attainment of the highest excellence which has redounded to the honour of the Bahamas and which service and attainment have been acknowledged as a source of inspiration by a significant portion of the nation; has through that person’s heroic exploits and sacrifice having gone beyond their personal and historic limitations, contributed to the improvement of the economic, spiritual and social conditions of the nation as a whole.”

Further, he said comments made by Dr Minnis during the most recent Majority Rule holiday further gave weight to the argument that Sir Roland should not have been considered.

At the time, Dr Minnis said: “In the middle of the 20th century, the House of Assembly was firmly under control of an entrenched oligarchy who maintained their stranglehold through unjust electoral laws and the brutal exercise of economic power. It was then that a new generation of political leaders rose up to challenge the old guard and to bring pressure on the colonial power.”

Sir Roland was elected to Parliament in 1925 before there was party government in the Bahamas. The PLP was founded in 1953, followed by the UBP in 1958. Sir Roland headed the UBP and became the Bahamas’ first premier in 1964 after internal self-government was introduced. He gave up the leadership of the UBP in 1970 because of ill health, but continued to represent the Shirlea constituency in the House of Assembly eventually as a member of the FNM. He was one of the “Bay Street Boys,” a wealthy group of merchants that opened up the Bahamas to tourism, investment and casinos. When he died in 1980 he had been the longest serving member of Parliament, having served for 52 years. His record of service has not been broken.

Sir Lynden and the PLP formed the next government of the Bahamas in 1967.

Focus on the church, do not comment on anything that is outside of your scope....

Sometimes it appears that our country is just as consumed with racial prejudice as is the "Great" U.S. of A. Domage!

James Palacious needs to keep his opinions to himself and focus on the ethical and moral issues in this country that need fixing. These religious leaders are under the impression that they can influence every aspect of this society and cannot seem to respect other viewpoints and values. Take a seat archdeacon!

He said that it was his own opinion. . .he has d said some helpful things in the past. . .and he has said some down right "opined" views also!! I worked with him in the past and found him a capable and brilliant man. . .except when it comes to his loyalty to the PLP. . .otherwise he is one of the better minds in this country. . .same endemic fault seen in almost every PLP. . .puch blind and think that all is for them. . .whether their reasoning is badly flawed they don't give on dang. . .they want what they want. . .to hell with facts and better common sense. . ."GEE ME WHA I WANT". . .

SAYS THE MAN WHO TRIES TO MAKE YOU FEEL GUILTY FOR "THE ORIGINAL SIN" ANYTHING REAL IN THE BIBLE BUDDY YOU GOT ANY PROOF? WHY PEOPLE LISTEN TO YOU IS BEYOND LOGIC JUST ANOTHER FORM OF SLAVERY..=

.Why wont he want Sir Cecil Wallace Whitfield not to have the national award........????.....who has a national building named after him....

And he wants A.D. Hanna to be. . .WHO IS NOT KNOWN FOR ANY DANG THINK BUT GRINNING HE BIG TEETHE . . . AND COVERING UP FOR PINDLING!! Typical PLP. . .they really don't see the mess that they do. . .blind blind peoples them. . .THEY WILL NEVER BE ANYTHING THAN A CORRUPT POLITICAL PARTY. . .AS LONG AS BRAVE THEM STAY THERE. . . THAT PARTY IS HOPELESS. . .EVEN THE BEST MIND S AMONG THEM ARE NOW LOST TO LIES AND CORRUPT THINKING. . .PITIFUL!

If they didn’t see fit to give it to you when you was living, it sure doesn’t mean nothing to you when you dead. So if you gotta die to receive recognition you’ll be just ok.

Minnis should call the Queen and politely tell her we made a mistake in 1973 by allowing whites to remain here - just like South Africa did in 1931.

Ask her to give them all the Right to Abode & Settled Status in Great Britain, and put them all on planes/boats, outta here.

Put an end to this nonsense once and for all.

In the meantime, it's likely that the good Archdeacon's services are needed in the coolers at a certain local food chain :-)

The priest is a brave man. What doc has done cheapens what it means to be a National hero perhaps doc was told to make him a hero by his bosses

Mr Archdeacon, All are racist in some way or another. To color, ethnic culture, etc. The good book says.....he that is without sin let him cast the first stone. It also says you must forgive you enemy. With you mindset you will always be enslaved.

He needs to give up the tribal mentality of the all for me crew. Dont know why he is even asked to comment on these issues.

At least the UBP left the treasury with money and what happened since 1967? Its been broke since.

SIR RANDOL ALMOST SINGLE-HANDEDLY LIFTED THE LOWER CLASS TO BETTER STANDARDS THROUGH HIS UNION ACTIVISM AND U.N. INTERVENTIONS IN THE 1950s.