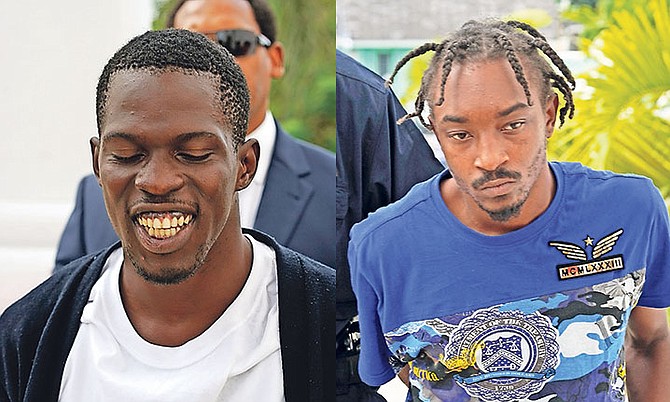 TWO men in their mid-twenties were arraigned in a Magistrate’s Court yesterday in connection with two separate murders which took place over the weekend, one of which occurred at a party on Boxing Day.

Anastoyan Rolle, 26, of Malaysia Way, and Charles Whyms, 24, of East Street, each stood before Chief Magistrate Joyann Ferguson-Pratt facing murder charges stemming from incidents that occurred on December 26 and 27, respectively.

Concerning Rolle, it is alleged that on December 26 he murdered 25-year-old Alexander Rahming of Elizabeth Estates, and attempted to murder Donnice Nottage.

Regarding Mr Rahming’s murder, according to police reports, shortly before 1am, he was attending a party at Commonwealth Boulevard in Elizabeth Estates when he was approached by a man with a firearm who shot him before fleeing on foot.

Mr Rahming was pronounced dead at the scene.

According to reports, shortly after 3pm on the day in question, Mr Dorsette was in his home at Sixth Street, Coconut Grove when two men armed with firearms entered and shot him before fleeing in a Honda vehicle. He was pronounced dead on the scene. No one else in the home was injured, according to initial reports.

Both men were not required to enter a plea and their matters were adjourned to February 26 for service of a voluntary bill of indictment (VBI). They were remanded to the Bahamas Department of Correctional Services (BDCS) in the interim.

Meanwhile, a 19-year-old was arraigned before the chief magistrate over allegations he robbed two people at knifepoint of over $500 worth of merchandise and cash combined.

Ranoldo Rhoden, of Father Calnan Road, faced two separate charges of armed robbery and another two of receiving in connection with the December 28 incidents.

It is alleged that on the day in question, Rhoden robbed an individual of one gold watch worth $320 and $3 cash, and robbed another individual of a Samsung cellphone worth $235 along with $35 cash. He is also charged with illegally receiving the aforementioned items and cash.

However, subsequent to the chief magistrate reading off the particulars of the first armed robbery charge, Rhoden indicated to the court that he was not armed during the alleged incident.

Foreshadowing potential legal issues arising from Rhoden’s statement, the chief magistrate adjourned the matter to January 16 for a status hearing to allow Rhoden and his family to instruct attorney Alex Dorsett on how to proceed.