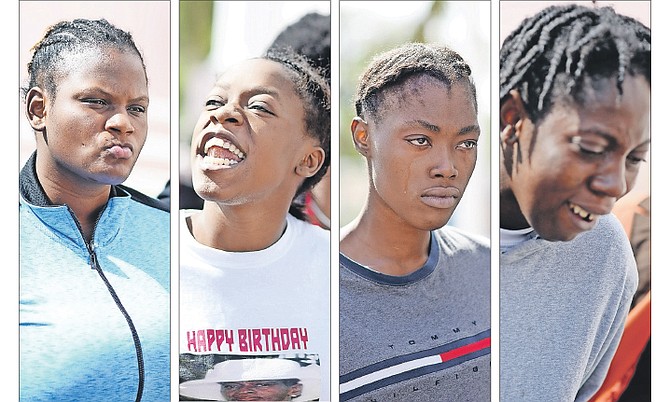 UNDER heavy police guard, four women, one of whom is pregnant, and two juvenile girls were arraigned in a Magistrate’s Court yesterday in connection with the stabbing death of a teenage mother in the Englerston constituency last week.

Thea Williams, Zaria Burrows, Davanya Lawes, Dervinique Edwards, along with a 16 and a 17 year old, faced intense scrutiny from a crowd of anxious spectators while being escorted by police to stand before a judge in connection with the January 25 incident.

Once before Chief Magistrate Joyann Ferguson-Pratt, the charges were read off to the six accused, whose ages ranged from 20 to 16. The parents of the two juveniles, present in the packed courtroom, were made to stand next to their respective children while the charges were read.

It is alleged that on the day in question, the six murdered Breanna Mackey, 19, of Palm Beach Street.

According to reports from police, shortly before 6pm on the day in question, a young woman was walking on Key West Street when a silver coloured Honda vehicle stopped next to her.

Three women got out of the vehicle, and, armed with sharp instruments, stabbed the young woman about the body before getting back into the vehicle and speeding off.

The victim was taken to hospital where she was later pronounced dead. Police later identified the victim as Breanna Mackey, a mother of one who had celebrated her 19th birthday the day before she was attacked and killed.

Police subsequently took five women and two men into custody for questioning  in connection with the incident. The men were not charged.

The six accused females were not required to enter a plea to the charges and the matter was adjourned to March 14 for service of a voluntary bill of indictment (VBI).

Prior to them being remanded, Burrows’ attorney Gina Morley informed the court that her client was pregnant and also suffers from seizures.

The chief magistrate made a note of Ms Morley’s concerns, which she said would accompany Burrows’ remand information.

Prior to the arraignment, police cleared and subsequently blocked off the western end of South Street straight up to the intersection of Augusta Street and South Street as a security precaution. An officer with a high-powered weapon could be seen patrolling the area.

A crowd, which consisted of some individuals who were present at the Magistrate’s Court complex from Monday in anticipation of the arraignment, was made to stand behind a fence and view the accused from the parking lot overlooking the court complex.

Days earlier, police officers stationed at the court complex had to, on multiple occasions, quell some of the spectators who had become boisterous while lined up on either side of South Street expecting to see the formal arraignment of the six accused.

As the six were being escorted out of the court complex to be transported to prison following the arraignment yesterday, and followed by their loved ones, the crowd erupted into a loud roar, with some persons shouting harsh words in the direction of the accused and their family.

“Don’t (expletive) cry now!” one woman could be heard shouting to the accused.