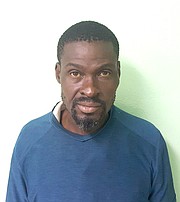 A 42-year-old man was arraigned in Abaco’s Magistrate’s Court yesterday on ten counts of arson related to Sunday’s destructive fire in The Mud shantytown.

Albury Alfred was not required to enter a plea and his matter was adjourned to March 15, police said in a statement.

Prime Minister Dr Hubert Minnis has since pledged that the area the fire affected will be cordoned off and no structures will be allowed to be rebuilt in that space.

Penalty for arson can include up to 20 years in prison, according to the Penal Code.