TWO men, one of whom was being electronically monitored by police, were found shot to death in Jubilee Gardens early Wednesday morning in a car with its motor still running. The men were reportedly cousins.

The homicides came a day after a man and his fiancée had been shot dead during a morning ambush at Sandilands Rehabilitation Centre on Monday. The most recent killings pushed the country’s murder rate to 86.

According to police, gunshots were reported in the Jubilee Gardens community sometime after 11.45pm on Tuesday.

Responding officers later discovered the bodies of two men with injuries in a car parked in the driveway of a residence in that neighbourhood.

EMS personnel were called to the scene to give assistance, but were unsuccessful in reviving the two men. 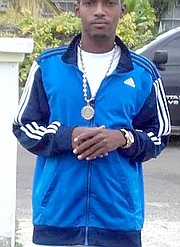 Sheddy Bain, thought to be one of the victims.

They were pronounced dead at the scene a short time later.

RBPF press liaison officer, Superintendent Shanta Knowles said while police were still looking for leads into this matter, they had no evidence to connect it to Monday’s brazen double murder.

She added that police were actively working both cases and “hoping that as quickly as possible, we can resolve them.”

She told reporters that police were still working to determine why the men found dead Wednesday were in the Jubilee Gardens area.

“We are getting information that one of them may have been visiting someone at that residence, but have not yet confirmed if they lived there,” Supt Knowles said.

While police have not identified either of the victims, The Tribune understands one of the men is Hastings “Tweety” McQueen, 28, and the other is his cousin, “Sheddy” Bain.

McQueen was reportedly out on bail for a serious offence and was being electronically monitored.

In 2012, McQueen was charged with the murder of Owen Hanna. The outcome of that case is unclear.

Hanna was shot dead near his home in the Redland Acres Subdivision in August of that year.

Police are asking anyone with information that can assist with this investigation to contact the Central Detective Unit at 502-9991/2, Crime stoppers at 328-TIPS (8477) or the nearest police station.

I formally request that the Tribune, Guardian, Punch and Bahamas Press list the names of the murdered at the end of the year. Every one of these "journalistic" arms record a different count- which says a lot about the press in this country- and just so we are clear - it is nothing good. Is it 82, 84 or 86? How hard is it to have a unified number of the dead?

Dear Commissioner- assign Marlon James's novel A History of Seven Killings to every member of the RBPF to read. That novel- set in Jamaica in the 1970s - describes where we are. it opens with the story of young men used as hitters who once they have committed their murders are then killed by their bosses. why? to further distance the murders committed- from those that ordered the hit, cutting off their only connection to it- and because the young men are viewed as disposable by those in control. I don't know whether these 2 deaths are linked to the Monday deaths but two people were killed by two men and now two men are dead. do the maths

Electronic monitoring only says where you are NOT what you are doing! Seems like a waste of time to me!

No matter what, these fellows are going to find who they want to kill, wherever they are. Young men that have fallen through the cracks of our society. They wanted to have a referendum for the rights of Bahamian women ( like anybody can keep Bahamian women back). What they need is a referendum to save these young men, they are the most vulnerable (and the most dangerous) people in this society.

So word is that one of the victims of this incident is related to the male that was killed on Monday morning. So is the commissioner of police or the police spokesman going into 2019 with their ‘tired and worn out speech, usually delivered of the still warm, but dead body of a murdered victim, that the victim was a prolific offender and a person known to police?’ When will these officers stop baiting the public with ignorance and understand that it is the polices’ duty to keep every citizen safe and murder of a criminal or even a wanted man is still bloody murder. And rather than appearing as if to engage in ‘active policing ‘. The commissioner or any police spokesman should ensure that any crime, especially murder, committed in this country will be taken seriously and ALL pepetrators of crime, especially murder, will be hunted down, to the four corners of the earth and brought to justice. Swiftly. And rather than issuing a grey message about prolific offenders, the police should warn the public against engaging in vigilante justice or taking matters into their own hands. Murder is murder and the police should also warn young men against joining gangs or engaging in gang activities.

The police always say it so the general population does not freak out about the level of crime. The whole system has basically collapsed, you have people out on the streets who have been charged with murder 5 years ago. Whilst i don't agree with people being locked up whilst awaiting a trial if it takes that long, they need to ensure that the trial happens within a short time, during which the person can be locked up (say withing a month of them being charged).

Bran dispensing justice in the town square. Nothing less will do. What's say Tal