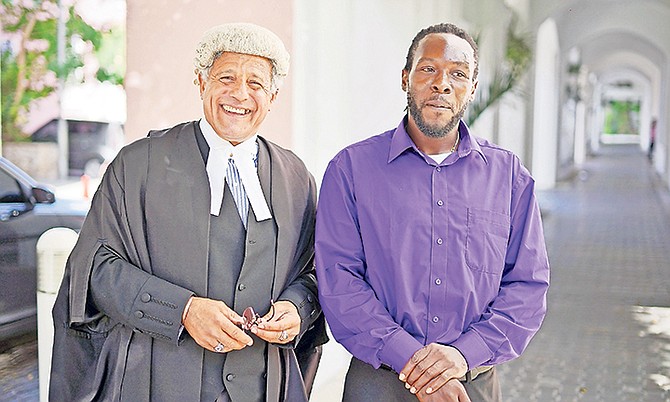 THE Court of Appeal has granted Bahamas-born deportee Jean Rony Jean-Charles leave to appeal its revocation of a Supreme Court judge’s landmark decision concerning his controversial detention and removal from The Bahamas to the Privy Council, despite stern opposition from the Crown.

Appellate President Sir Hartman Longley, and fellow appellate Justices Jon Isaacs and Sir Michael Barnett ruled yesterday that the Crown had not sufficiently convinced the court as to why they should prevent Mr Jean-Charles and his attorneys from appealing their October 17 written decision.

Mr Jean-Charles, who was present in court yesterday, told reporters after the hearing that he feels “great” about the opportunity to continue fighting for his constitutional relief, while Fred Smith, QC, his lead attorney, said having the Privy Council consider the case is “good for the development of jurisprudence in the Bahamas.”

“We’re very pleased,” Mr Smith said outside of court. “As (Sir Hartman) said, this is a matter of great public importance and I think it’s going to be good for the development of jurisprudence in the Bahamas, for the Privy Council to have an opportunity to consider the issues. The case is not as simple, we think, as it was made out to be.

“I know the Court of Appeal dismissed the habeas corpus aspect of it, but there are much larger constitutional issues. How you can bring a constitutional motion, what considerations the Supreme Court must take into account? If you remember, Justice Hilton’s judgment was basically all about (Mr Jean-Charles’) constitutional rights. And regrettably there are many people in Mr Jean Rony’s case who were born in the Bahamas and were most illegally deported.

“So we feel that even in a habeas corpus case you can still raise that constitutional issue to be determined.”

Mr Smith added: “One thing I want to make clear, is that the dismissal of the Supreme Court judgment in his favour doesn’t mean that (Mr Jean-Charles) still doesn’t have his constitutional rights to be determined. So even if his appeal doesn’t succeed, he still has the right to mount a fresh constitutional motion for damages, for his illegal detention, for assault, for battery, false imprisonment and illegal deportation.

“And I think now the government has gotten the message…you can’t be expelling from your own country citizens or people born of the soil. Otherwise, there’s no limit to who they can start expelling from the country without issuing a deportation order.”

Yesterday’s proceedings were the latest in Mr Jean-Charles’ legal battles concerning his expulsion from the Bahamas to Haiti on November 24, 2017, after being detained from September 17 of that year, and Supreme Court Justice Gregory Hilton’s subsequent landmark ruling that both his detention and expulsion were unlawful.

At the time, Justice Hilton further found that Mr Jean-Charles was deprived of his personal liberty, unlawfully arrested and detained/falsely imprisoned in breach of his rights guaranteed him under the Constitution.

Justice Hilton thus ordered the government to issue a travel document to Mr Jean-Charles to “allow and permit” him to travel from Haiti into the Bahamas, and that it pay the “reasonable cost” of Mr Jean-Charles’ journey “forthwith upon his return”.

He further ordered that the minister and director of immigration should, no later than 60 days after Mr Jean-Charles’ return and upon his application, issue “such status” that would “permit him to remain in the Bahamas and to legally seek gainful employment.”

However, Justice Hilton dismissed the writ of habeas corpus Mr Smith had filed on November 29, 2017 for the government to produce Mr Jean-Charles, finding as Mr Jean-Charles was not in the custody of the state at the time the application for the writ was made, the order for the writ should not have been issued.

The Crown subsequently appealed Justice Hilton’s decision, contending that it was based on “flimsy” and “very dubious” evidence, and that such evidence warranted the ruling being set aside or alternatively reheard with “proper submissions and evidence”.

The Crown also submitted that the evidence in support of Mr Jean-Charles’ constitutional motion was “third-party” evidence and not entirely reliable, as he questioned the veracity of a lot of the claims contained in it.

In their written ruling last month, after having heard submissions from both sides, the appellate judges said there could be no finding of constitutional breach relating to Mr Jean-Charles’ detention and deportation last year because of the uncertainty over his identity.

Thus, the appellate justices found that any application for constitutional, or any other relief, should not have been entertained until that issue was resolved.

Attorney General Carl Bethel described the appellate ruling as an important vindication of due process, but Mr Smith regretted that the judgment did not address the far-reaching Constitutional issues raised by the case.

In an affidavit subsequently filed to the London-based Privy Council, Mr Jean-Charles’ lawyers argued that the Court of Appeal was wrong to conclude that their constitutional application should not have proceeded because of uncertainty over Mr Jean-Charles’ identity.

In turn, the Crown, led by attorney Loren Klein, opposed Mr Smith’s application for leave to appeal to the Privy Council, charging that while the Crown was not objecting merely to put “obstacles” in Mr Jean-Charles’ way, but to fulfill its duty in assisting the court in filtering out any “unmeritorious” appeals.

Mr Klein contended that the appellate judges dismissed Justice Hilton’s decision on three main grounds, which were all procedural in nature, and thus did not make any determination on Justice Hilton’s findings on Mr Jean-Charles’ alleged constitutional breaches.

Conversely, Mr Klein noted that the appellate judge’s ruling made it clear that Mr Jean-Charles is free to pursue any appropriate remedies, including launching a court action for Constitutional redress in the Supreme Court, based on his detention and removal from the Bahamas.

Thus, Mr Klein submitted that for the Court of Appeal to grant leave to appeal to the Privy Council, when the appellate court has not ruled on the Constitutional issues determined by Justice Hilton, would have the effect of “sanctioning a leap-frog appeal from the Supreme Court to the Privy Council.”

In response, Mr Smith said his client has a right to go to the Privy Council to have his constitutional relief reinstated, and argued that he cannot be denied that relief, or leave to have it reinstated, simply because of the appellate court’s decision to overturn Justice Hilton’s ruling on procedural issues.

Additionally, Mr Smith said Mr Jean-Charles’ matter is “self-evidently” one that started from a constitutional matter, consequently raises constitutional issues, and is a matter of “tremendous public importance,” the likes of which the Crown relied upon to argue some of the submissions its attorneys made.