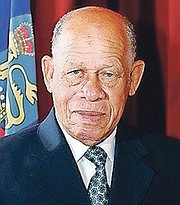 A 21-year-old bank teller was charged in a Magistrate’s Court yesterday with using his job to steal more than $49,000 from former Governor General Arthur Dion Hanna over a six-month period.

Cameron Rolle Jr, of Golden Gates, stood before Magistrate Derence Rolle Davis faced with 27 counts of stealing by reason of employment, which allege he stole some $49,600 from Mr Hanna between October 17, 2017 and April 16 of this year.

Rolle, who was represented by attorney Tonique Lewis, entered a not guilty plea to the charges. The case was adjourned to May 25 for trial.

Bail was denied and he was remanded to the Bahamas Department of Correctional Services until that time or until he applies for bail at the Supreme Court, and is successful in doing so.