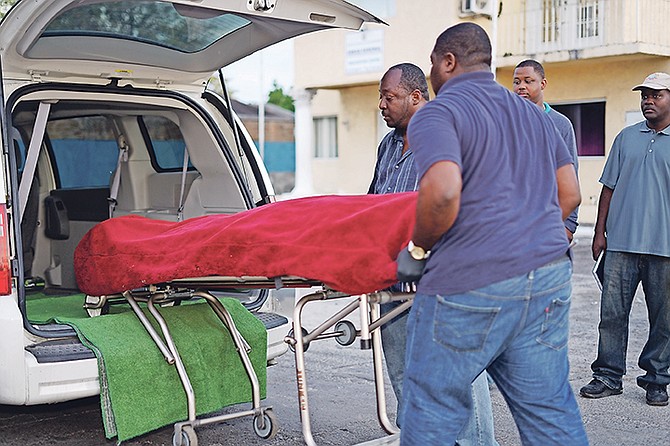 POLICE remove the body of a man who was shot and killed off Moore Avenue early on Tuesday morning. This came hours after another shooting death at nearby Homestead Street.

POLICE are investigating whether two murders that occurred less than 12 hours apart in the same area of New Providence are connected.

Early yesterday morning a man was shot and killed off Moore Avenue. Hours earlier, around 8pm Monday, police said a man died in hospital after he was shot at nearby Homestead Street.

The killings pushed the murder count to 26 for the year, according to The Tribune’s records.

“Upon the arrival of officers, we discovered a male lying in a building with injuries to the body. Paramedics came to the scene, they attempted to revive the male however they were unsuccessful as he had succumbed to his injuries here at the scene.”

Police have identified the deceased as George Mortimer, 29, of Moore Avenue.

In relation to the first murder, police said it occurred in the same area.

“Around 8.30pm (Monday) night, within this same vicinity (off Moore Avenue), a man was at the junction of Homestead Avenue and Homestead Street when a black Honda Fit pulled up,” Supt Knowles said.

“We were told that two men armed with firearms came from that vehicle, opened fire on the man, hitting him.

“Both persons got back into the vehicle, which sped off.

“The victim, who was injured, was taken to Princess Margaret Hospital and later succumbed to his injuries there.”

The man who was killed Monday night has been identified by police as Kenneth Kemp, 21, of Homestead Street.

Supt Knowles added that police are investigating whether the matters are connected.

Officers have also increased patrols in the area since Monday night’s incident.

Anyone with information on these or any other crimes are asked to call police at 919 or Crime Stoppers at 328-TIPS.