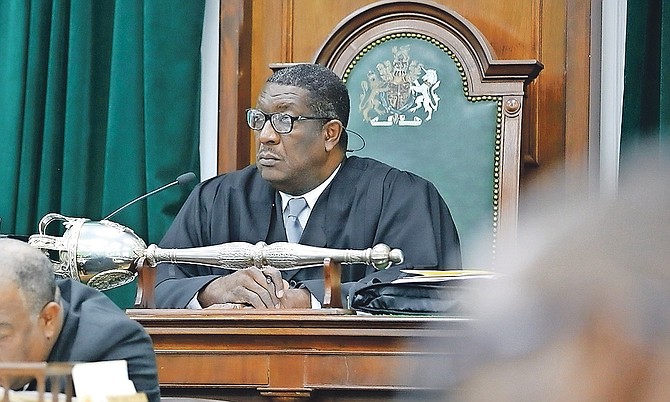 House Speaker Halson Moultrie said yesterday the Judges’ Remuneration and Pensions Act could be used as a precedent for the establishment of a review committee or commission to bring parity to salaries of those in the parliamentary and executive branches of government.

While he pointed to sections three and four of the act as a benchmark, it is unclear whether he was also referring to the pay scale outlined in the legislation governing judges’ salaries.

According to the Judges’ Remuneration and Pensions Act from 2008 and onward, the chief justice is the highest paid of the judiciary with a salary of $110,000 per annum.

“On behalf of my colleagues at this moment I take a step in the shoes of my predecessor as speaker down the path of courage. The public perception is too negative of politicians,” Mr Moultrie said at the start of yesterday’s Parliament session while he gave a tribute to former House Speaker Sir Arlington G Butler who died Thursday night.

“The truth is, politicians make colossal personal sacrifices, as well as financial ones. There is an argument today that politicians knowingly signed up for the salary being offered. What is flawed about this argument is that every employee also knowingly signed up for the salary they were being offered at the time of their engagement. Notwithstanding no one who has just started work would agree to have their salary scale frozen for more than 30 years.

“Perhaps sections three and four of the Judges’ Remuneration and Pensions Act Chapter 45 is instructive and can be used as a precedent in establishing a review committee or commission to bring parity for the parliamentary and executive branches of government.”

His remarks come amid public uproar over Prime Minister Dr Hubert Minnis’ announcement that MPs would receive pay increases in the next budget. The prime minister also said a committee would be formed to review all salary structures for government entitles.

Mr Moultrie’s comments also come the day after the prime minister’s Press Secretary Anthony Newbold suggested the Minnis administration has placed a stipulation on its pledge to increase salaries for MPs.

The salaries will not be increased if the economy does not improve, Mr Newbold said Tuesday. He would not say which economic metrics will be analysed to determine if a salary increase for MPs should take place.

His statements came in response to questions about whether Dr Minnis regrets his 2014 position on raising the pay of MPs.

Mr Newbold said there’s “no intention to” raise politicians’ salaries so long as the economy is feeble and Bahamians are suffering.

Asked if he meant the economy must considerably improve for MPs’ salaries to be raised, he said: “It’s the only way they will be raised.”

Dr Minnis did not suggest when he announced the salary increase in Parliament several weeks ago that a raise is conditional on improvements in the country’s economy.

At the time Dr Minnis said: “I want to put the country on notice that at the next budget I will come forth with a pay increase for the members of Parliament. I only want to put the nation on notice that the time has come when individuals are being paid by that government half a million dollars per annum, individuals are receiving contracts up to $800,000 and the members of Parliament are being paid $28,000…I will establish an independent committee who will look at member salaries, who will look at government structure salaries for this half a million dollar, these $800,000 and these contracts signed a few hours before the election. “All of that will be reviewed. (The committee will) review all salary structures for government entities.”

What kills me with people like this is that even in private practice (especially for the attorneys who are solo practitioners) they never see $70,000 standing up. So you get in for the first time and 6 months later crying for a raise when in private even when you getting your hustle on, you don't make that salary. Stop trying to get the public to fund your lifestyle especially if you get to keep you day job and make money from that too. This is ridiculous!

Lol Halson Moultrie must be joking

The Speaker of The House has disgraced himself, perhaps fatally, and should now give serious consideration to stepping down as Speaker.