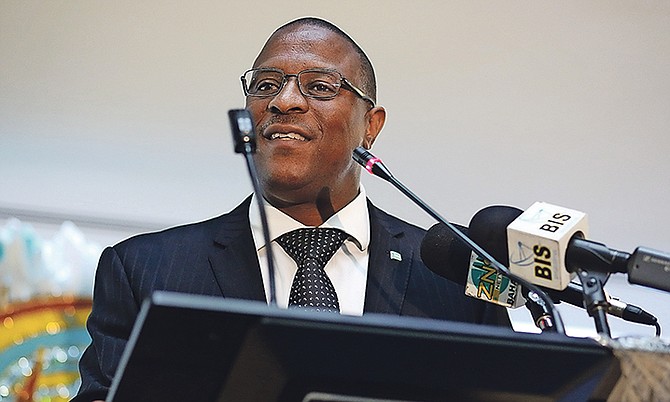 MINISTER of Youth, Sports and Culture Michael Pintard said yesterday economic growth, shrinking the deficit and organising public services are higher priorities to the Minnis administration than raising the pay of Members of Parliament.

While Mr Pintard said Prime Minister Dr Hubert Minnis is correct that MPs need a raise, he did not expect a pay hike “any time soon” and other important issues are likely to precede any increase.

The Marco City MP was asked about the contentious issue of proposed salary increases for MPs while at a signing ceremony yesterday for an agreement between the governments of the United Arab Emirates (UAE) and the Bahamas.

Mr Pintard initially dodged the question, saying: “The prime minister has spoken on the subject, over the course of the next several weeks you’ll hear him speak more on it. For me I’m narrowly focused at this juncture…[on] using sports and culture as a tool of national development.”

However, when pressed by reporters about whether he “cared” about the salary increase at all, Mr Pintard said: “I do not expect that any time soon there’s going to be a pay raise for any member of the Minnis administration.”

He added: “Clearly the prime minister is correct that there is a need, at some point in the future, for a pay raise, but his priorities are clear.

“There are a number of things that will precede that and for the prime minister, he is interested in growing the economy, closing the national deficit, making sure that the public service is properly organised, in other words eliminating anomalies that exist between salaries, making sure persons who historically were due salary raises and increments, that those things in fact take place.

“So there are a wide range of things that are far more important to this administration than another item, which is salary raise for Members of Parliament. And those things are, many of those are likely to precede any increase.”

He also said: “The prime minister is a wealthy man, and so certainly what he was speaking about was in the broader context of us making decisions to change the way that we do business in this country.

“So for those who wish to be critical, I would say to them just stay tuned. Our goal is to transform the condition of Bahamians first; every elected member of Parliament will be fine. I believe that his concern is for the people long before he [has] any concern about those that have been called to serve them.”

MPs currently make a salary of $28,000 a year. Two weeks ago, Dr Minnis announced he would present a salary increase for MPs in the next budget cycle. At the time, he said he would create an independent committee to look at the members’ salaries and review the salary structure for government entitles.

This announcement immediately sparked immense backlash from the general public and the Official Opposition. It also represents a change in Dr Minnis’ 2014 position, when in response to the Christie administration’s desire for the same thing, he said: “As long as I am leader of this country, the FNM would not support any pay increase with all the pain and suffering that is going on in this country.”

Shouldn't Pintard's retracting words on the MP salary increase matter be coming to us directly from the PM's mouth?!