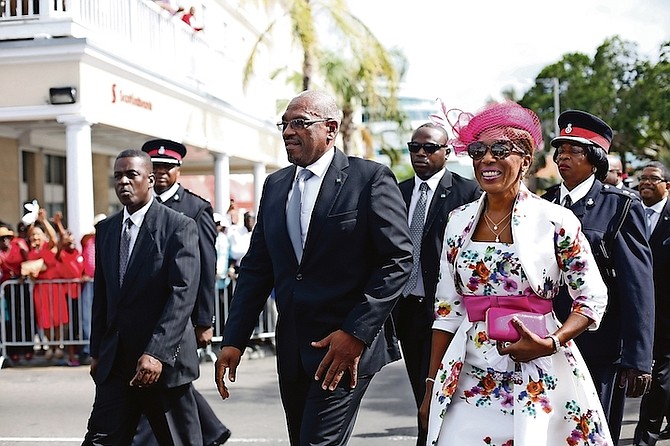 THE Minnis administration will seek the consent of the electorate by way of a referendum on instituting term limits for the prime minister, a recall system for non-performing members of Parliament and an independent Constituencies Commission and Electoral Commission, the Speech from The Throne revealed yesterday.

The speech, which revealed the government’s intended plans over the next five years, was read by Governor General Dame Marguerite Pindling.

The government also intends to create an Office of the Ombudsman to provide a direct source of relief. It is hoped that people who have legitimate grievances due to the actions or inaction of the government or any public agency will have a form of recourse through this mechanism, the Speech from The Throne noted.

The last two referenda held in this country were not successful as both votes – the gaming referendum of 2013 and the constitutional referendum of 2016 - under the former Progressive Liberal Party  government failed.

The Christie administration spent $1.2m on the 2013 gaming referendum. It was also estimated that the constitutional referendum cost the public purse around $1.57m.

The four bills touted to bring gender equality to the country’s Constitution were overwhelmingly rejected by voters at the polls on June 7, 2016.

Only three constituencies across the country voted by consensus to approve any of the four gender equality bills proposed.

And fewer than half of eligible voters, 46.66 per cent of them, participated in this constitutional referendum.

In the Family Islands, turnout was generally lower than in New Providence. Only 26.92 per cent of eligible Long Island voters participated in the referendum, the lowest in the country. Former leader of the Official Opposition Loretta Butler-Turner represented this area at the time.

In the gaming referendum held on January 28, 2013, out of 38 constituencies in the Bahamas only three returned a majority “yes” vote.

Officials said voter turnout was extremely low also in this process as well.

A date has not been announced for the referendum proposed by the Minnis administration.

Comrades! If we as a colony’s people are so keen to keep up with the pretense colonial pomp and pageantry, then it shouldn’t be the role just for our woman’s to dress up for the circumstance. I think our new ‘First Lady’ Patricia Minnis’s arrival at Parliament - speaks well her respecting the colony’s dress up pomp.
Yesterday, Her Excellency Dame Marguerite and the ladies of the newly elected and appointed parliamentarians and government officials – gave the men’s a master class in how dress up for the colonial-like proceedings the opening of parliament and the reading of the Speech from The Throne - while all the parliamentarians man's - with the exception of one - dressed down for the occasion.
Comrade Man's, come 2022 - please do your colonial duty to make a fuss to dress up for the pomp and occurrence, okay.....they're known as man's Morning Suits - with da English hats and long tails jackets!!

No Mr. Minnis - time for you to do what's right by the Bahamian people! After all, it's now the people's time! And we, the Bahamian people, would much prefer a highly prioritized national referendum on the wholesale repeal of all of the web shop related gaming legislation that was enacted under the corrupt Christie-led PLP government against our wishes as expressed in a previously duly held national referendum (paid for by our tax dollars), the outcome of which was wrongfully (illegally) ignored. And we want you to know Mr. Minnis that we curiously observed Sebas Bastian grinning from ear-to-ear while seated at the main swearing-in ceremony for your cabinet ministers at Government House. Make no mistake about it Mr. Minnis, we, the Bahamian people, want all of the web shop gaming operators shutdown at the earliest possible time and a National Lottery established for the sole designated purpose of assisting with the urgent funding needs of our seriously under resourced public education system.

Comrades! Wasn't there a 2002 Referendum that asked voters five questions including - if the government should be setting up of a National Commission on Teaching?
Jeff Lloyd the eager to spend money red minister over at the education ministry, may not have read it - much less known about it?

Just have one massive referendum and opinion poll each term. Exporting medical Cannabis might be in there.

Minnis needs to be a BIG man and tear the frigging old 1973 Constitution up and let Parliament adopt a new one ................. and ask the citizens to move the country into the 21st century with a proportional representative unicameral Parliament and elected President ........ a modern republic like Tanzania or Israel ........ smt