Observers Point To Lack Of Technology In Election 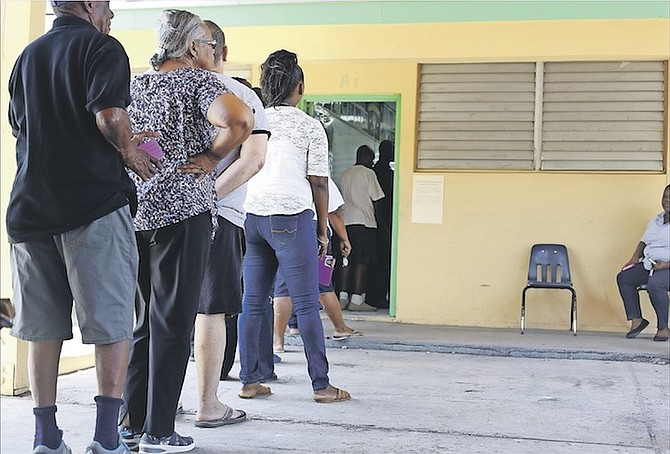 Voters queue to have their say on election day in The Bahamas. Former PLP MP Philip Galanis said party candidates rejected by voters should be barred from contesting leadership posts at the party’s upcoming convention. Photo: Terrel W. Carey/Tribune Staff

Were you satisfied with the electoral process in the general election?

WHILE The Bahamas has maintained its record for executing free and fair elections, the country is in last place in the region when it comes to election technology.

In preliminary reports, electoral observers deployed by the Caribbean Community (CARICOM) and the Organisation of American States yesterday urged officials to act on repeat recommendations to modernise the process, impose campaign finance regulations, and bolster the independence of the Constituencies Commission.

Both missions zeroed in on the electoral organisation for the advanced poll, and the last minute replacement of the parliamentary commissioner, which was said to have created unease leading up to the May 10 poll but ultimately did not impact the quality of the election.

CARICOM Deputy Chief of Mission Orrette Fisher said the team was surprised to discover the manual registration system and voter’s card, adding that much of the problems encountered during pre-poll activities could have been averted with an electronic system.

“For example,” Mr Fisher said, “that the list of advanced polling, that the people who applied were unable to go online and to confirm whether or not they were eligible to vote on that day. I think the whole issue of how the application is made to be on that list, and then the manual entry of the people in the list.”

He continued: “Having an entire database and then extracting the list from that would have been a much cleaner process and the technology is available and is being used elsewhere.

“So I think that is something that would definitely require some consideration and there are other areas within which technology can be used to advance the process.”

Mr Fisher, director of elections in Jamaica, noted that the country was at the “forefront of technology” when it came to its police force.

“I would not want to stand in judgment,” he said, “but I would say that you are behind the rest of the Caribbean in that regard.”

The CARICOM team was led by Chief of Mission Josephine Tamai, chief elections officer of the department of elections and boundaries of Belize, and observers visited 223 polling stations across 20 constituencies.

Ms Tamai said: “What we observed on Election Day was outstanding. It’s just these activities leading up to the day that created some shadow in terms of the perception, in regards to the election.

“Definitely we will be looking at the boundaries commissioner, the issue of technology - that’s a major issue that can create improvement, and campaign financing regulations. Those would be the top three.”

The missions held discussions with national stakeholders, inclusive of the major political parties, civil society and members of the international community.

Both missions also noted that the categories of persons eligible to vote in the advanced poll had been expanded to include candidates and agents, which contributed to an unforeseen increase in workload at the Parliamentary Registration Department and difficulties with producing the advance poll register.

Speaking to campaign finance reform, OAS Ombudsman Sherry Tross said: “The mission heard concerns from several stakeholders regarding the influence of foreign money in the current electoral process and the absence of a level playing field. The Bahamas has no regulations regarding political - electoral financing or disclosure of sources of funding.

“There is no public funding for political parties or candidates, meaning electoral campaigns are privately funded. The origin of private funds is not regulated and there are no prohibitions on foreign and anonymous sources. Also, the Bahamas sets no limits on campaign spending and political parties are not required to disclose their finances.”

Ms Tross pointed to recommendations submitted by the OAS following the 2012 election calling for the establishment of a legal framework for the financing of political parties and campaigns, and noted that there had been no action by the government.

“In order to guarantee a more level playing field and transparency in the electoral process,” she added, “the mission urges the Bahamas, once more, to consider introducing legislation to regulate political campaign financing.”

She congratulated the country for taking steps to ensure that eligible citizens who live abroad had the opportunity to vote, which she said is unique in the region.

The team observed a total of 29 constituencies and visited 157 polling stations, according to Ms Tross, who praised the professionalism and thoroughness of poll workers, supervisory personnel and the police.

For its part, the US Embassy deployed 30 observers to more than 100 polling stations in New Providence, Grand Bahama and Eleuthera on May 10.

In a statement yesterday, the embassy congratulated the country on a successful election, noting a safe and peaceful atmosphere with minimal irregularities.

2 terms max for a PM, and a separate vote for MP and PM based on popular vote. Please make these changes. The heavily weighted majority party thing for PM is killing this country.

Agree with two terms max for PM. Also think there should be some sort of limit on MP for particular constituency, perhaps three terms. Not sure about that separate vote thing, needs expanding. Think our system works just fine if term limitations are put in place and boundary gerrymandering is limited or done away with entirely.