Christie Insists Govt Will Ensure Vote Is Free And Fair 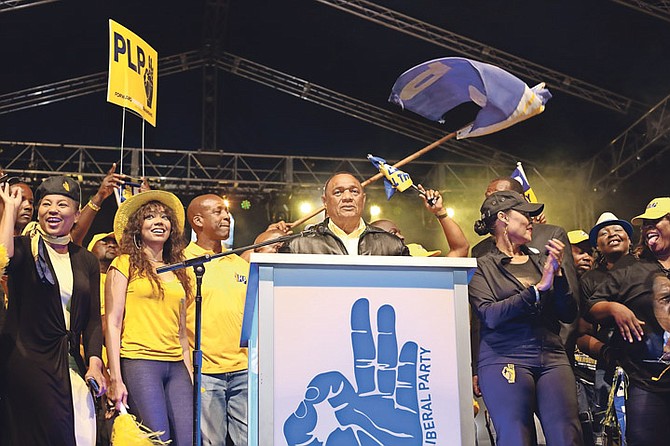 PRIME Minister Perry Christie said yesterday the government will “fiercely and jealously guard our democracy” to ensure that Wednesday’s general election will be free and fair.

During a courtesy call with international election observers at the Office of the Prime Minister on Monday, Mr Christie said elections in The Bahamas have always been peaceful and fair and he expects this general election to be the same.

Meanwhile, Foreign Affairs and Immigration Minister Fred Mitchell said the government has “nothing to hide” and the observers have been invited to the country to ensure that “our electoral practices stand with the best practices around the world”.

Their comments come amid concerns about the voting process after chaos at last week’s advanced poll led many persons to speculate that the general election was too much for the Parliamentary Registration Department to handle.

All of the international organisations invited by the government to observe the electoral process on May 10 have arrived in the country.

Invited groups include: the Caribbean Community (CARICOM), the Commonwealth of Nations, the Organisation of American States (OAS) and the United States of America.

CARICOM and the Organisation of American States (OAS) were invited by the Ingraham administration to observe the 2012 general election, a first for the country.

Mr Christie assured the observers on Monday that if there is a transition between administrations, that process also will be smooth and fair.

“We fiercely and jealously guard our democracy and we have demonstrated now on a number of occasions the capacity to change, and to change peacefully,” Mr Christie said.

“We take pride in the fact that we participate vigorously in our elections and because we are a chain of islands one should be surprised by the extent of which we have been able to communicate nationwide the responsibility to vote. We anticipate there will be no difference in this election, we expect it to be peaceful and we expect the transition, if there is going to be a transition, and I suppose there will be even if I were to form a new government it will be a transition, it will be smooth. But most certainly we expect our democracy to respond positively and strongly as it has always done.”

Mr Mitchell maintained that the government has “nothing to hide” and said he hopes the Bahamas’ election can live up to international standards.

“This is the second occasion that international observer teams have been invited to come to the Bahamas to observe our elections and it is with the concurrence of all the political parties in the Bahamas that this is being done,” Mr Mitchell said.

On Saturday, Mrs Hanna Tetteh, a former foreign minister from the Republic of Ghana and a member of the Commonwealth observer delegation, told The Tribune she was surprised by the sudden decision of officials last week to reduce the number of polling sites for the advanced poll.

“We were surprised that the polling stations had been reduced from two to one (in New Providence) at apparently very short notice and we think as a consequence a lot of other things took place that perhaps might not have if there had been adequate information,” she said.

“But we would prefer not to comment on the specifics right now because all of that will be a part of the report we will prepare at the end of the election process. We do not think it is appropriate at this stage to say anything that sort of preempts or creates some unnecessary misperception before the actual voting date on the 10th of May.”

Bahamians first, we believe in Bahamians, full disclosures on Baha Mar, Bamsi and VAT, prior to election.......

Perry G. Christie has proven his word is as wothless as he himself is!!!

PERRY IS OLD SICK AND TIRED. HE WOULD NOT KNOW THE TRUTH EVEN IF HE TRIPPED OVER IT IN BROAD DAYLIGHT

......... and sexy Bernie wants him to spend some more time at home with her in Hotlanta

Don't sing it, BRING IT! Start with the sealed documents on Baha Mar.

The hidden video from inside the Parliamentary Registration Department room where the ballot boxes were being stored is ALL the proof we need to prove that the PLP government and its operatives like Carl Smith and Harrison Thompson are trying to STEAL this election ..... That video alone is evidence for the international observers to condemn the PLP and have them charged before the courts with election fraud ....... My God, who seals a ballot box with duct tape??????? ............ Carl Smith should not be allowed to just resign ............. he needs to be locked up ............. And is there truth to the fact that Sherlyn Hall is now a consultant?????

The PLOP would seal a ballot box with duct tape... lol