Turnquest Under Fire Over His Link To Sky Bahamas 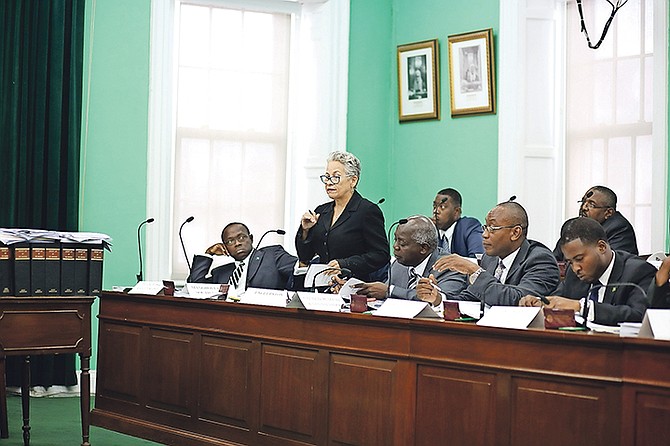 ENGLERSTON MP Glenys Hanna Martin yesterday criticised Finance Minister Peter Turnquest for allegedly failing to disclose his interest in Sky Bahamas to Parliament after the government approved duty exemptions for the repair and maintenance of aircraft in the 2017-2018 Budget.

Addressing her colleagues in the House of Assembly on Wednesday, Mrs Hanna Martin said because these concessions "could impact the financial interest of persons in the House," Mr Turnquest was "obliged" to reveal his interest in the company when the debate began.

"I want to raise the concern of a potential conflict of interest of favourable concessions of this budget, Mr Speaker, that might impact the financial interest of members and the rules require that you have to declare that out in the open," Mrs Hanna Martin said.

"The minster of finance declared in his communication on page 50, page 50 speaks about the duties that are being exempted and what I found interesting about this is, in his description he said 'providing duty exemptions for equipment and machinery specifically designed for groundwork and the service of cruise ships and sea vessels' but in fact the actual provision speaks to sea craft and aircraft, air and sea services.

"You have to have an awareness that these peculiar concessions could impact the financial interest of persons in the House. So you have exemptions and there are multiple items for aircraft in this budget and I support incentivising the aviation sector but this talks about the catering for the aircraft, the tyres and so on. So, Mr Speaker, I believe that the minister should clarify whether this impacts him financially... We are obliged when we debate to declare it. It is a part of transparency. It is an obligation. I am saying he ought to have disclosed it and that is what you normally do, if you have interest in something you are debating before the House, you disclose it. I am saying he admits he has an interest, we have tax concessions for aircraft and it ought to be something he put on the table."

In response, Mr Turnquest said before the election he disclosed all his interests to the relevant authorities because he had nothing to hide. He also admitted that he did not realise the aircraft exemptions were in the budget until he read them in the House of Assembly because he had "very little to do" with the changing of anything in the budget.

Mr Turnquest also said Mrs Hanna Martin's implication that he somehow amended the legislation to benefit himself is "misleading" and dangerous to his reputation.

"It is no secret in this place or in public that I do have an interest in Sky Bahamas airline. I have said throughout my budget that this minister of finance has had very little to do with changing anything in the budget, as a matter of fact, it may be interesting to note, that I didn't recognise that was in there until I was reading it," Mr Turnquest said.

"And so when she suggests that this minister of finance somehow amended or proposed an amendment to the duty rates to benefit him, it is a complete and utter lie and that is a strong word. It is intentionally misleading and it is dangerous to me and to my reputation. Secondly, the proposal to eliminate duties on aircraft was made by that side when I was sitting over there, not by me."

Mr Turnquest applauded the former Christie administration for reducing the aircraft duties because he said it will create "the opportunity for an industry that has not been able to rise to the level of its potential".

In response, Mr Turnquest said before the election he disclosed all his interests to the relevant authorities because he had nothing to hide. He also admitted that he did not realise the aircraft exemptions were in the budget until he read them in the House of Assembly because he had "very little to do" with the changing of anything in the budget...."It is no secret in this place or in public that I do have an interest in Sky Bahamas airline. I have said throughout my budget that this minister of finance has had very little to do with changing anything in the budget, as a matter of fact, it may be interesting to note, that I didn't recognise that was in there until I was reading it," Mr Turnquest said.

Turnquest has simply proven that neither he nor Minnis are worthy of the people's trust. It's rapidly becoming very clear that it's not the people's time, but rather the time of Minnis and his select few cronies! Notice how Minnis keeps quiet in the background while his dishonourable cabinet ministers, like Turnquest, go about feathering their own nests as opposed to doing the people's business. Seems eerily like Christie and his cabinet ministers under the last government.

So what Turnquest is trying to tell us is that even though he assures us that the PLP's budgeting was irresponsible and terrible for the country, he simply walked in to his new office, pulled their proposal for a new budget out of a drawer and presented it in Parliament without reading it?

If that's the case, he needs to resign.

If, however, his party is responsible for including the aviation sector duty exemptions into the budget, then he is guilty of a conflict of interest and not declaring the same in Parliament, and he needs to resign.

"General knowledge" that owns a stake in Sky Bahamas is not an excuse. The only FNM member who might claim such is D'Aguilar with Superwash... and even then, protocol ought to be followed.

Dr Minnis needs a new finance minister immediately. I had my doubts about KP from the time he pulled that I'm so angry I could blow a stack stunt at the FNM convention . It was ridiculous. I also came to believe that he was more interested in building a media presence and saying catchy political zingers than anything else. I see more of the same since May 11. Dr Minnis needs a qualified Minister of Finance.

Much ado about nothing. As far as aviation is concerned, i think it is clear the biggest beneficiaries will be Bahamasair and Nassau Flight Services, entities they (gov't) own. Most likely done as a backdoor subsidy to them and in the process a few crumbs drop to the others. As for whether he knew or not, since they just got elected and it is a PLP budget, that is not so far fetched. If anyone out there really believes these MPs know what is in the budget, we have a bigger awareness problem and more naivety than even i imagined... They read a few lines before time to speak, find a couple words they can twist to suit their speech, then argue for the sake of it afterwards. Finally, people in glass houses shouldn't throw stones. In the history of this Bahamas, no government and some of its representatives believed in hiding information from the public more than the PLP, one of the most secretive governments on earth.

Omg @islandnoy242242, just read the article for the first time and was going to comment on that very thing..."may be interesting to note, that I didn't recognise that was in there until I was reading it" Mr Turnquest said.*"

We're all going to hell in a clutch purse!

If he didn't know about the concessions WHO IN GOD's NAME FIRST STRATEGIZED THEN PREPARED THE ITEMS IN THIS BUDGET?? WHERE WAS HIS GOVT's STRATEGY FOR THE THINGS THEY WANTED TO ACCOMPLISH AND WHAT ADJUSTMENTS DID HE MAKE TO MEET THAT STRATEGY?? WHY IS THERE A DEBATE ON THINGS HE HAD NO HAND IN PREPARING?? No wonder these proposals seem so contradictory. Dr Minnis please read what your minister of finance just said. He needs serious technical assistance and vetting.

Comrades! If "KP" didn't read before he spoke in House - you gotta know neither did Minnis - the aloof from all ministerial roles prime minister. [There's no need make this stuff up].
Let's all hope Dionisio read it on behalf of - It's the People's time?

I'm not sure he's talking about reading "in the house", he may be referring to the first time he read the budget in "preparation" for the house presentation. BUT ITS STILL ABSOLUTE FOOLISHNESS. I can't believe he actually made that statement while knowing he was being recorded. I'm thinking these people came to office with a plan, they have their agenda, at some point they have to review what the other administration left in place and that review systematically says, does this part match my agenda or not? It seems like they just accepted everything that was there. It's like they don't have the ability to think. Oh the report's complete, great I'll just deliver it as is. No man Dr Minnis, these ministers have to do better or change them. I've seen enough from Turnquest. The Ministry of Finance is too critical at this time

Comrade ThisIsOurs, the only thing that stood in "KP's" way whilst in opposition was to outwit Long Island's now former MP "Reheasa" for the Red Party's Deputy Leader's position - and that was a cakewalk - considering "Reheasa" withdrew from the leadership race - before the red shirts convention delegates even got their chance vote. In government you have be a big boy.

Sadly, Minnis is more lost than Turnquest is. And I fear that the FNM is allowing its huge majority in the House to cause them to already start to take liberties that ought not be taken.

Coming from a Minister of Finance in Bahamaland, in the words of HAI, '"Unthinkable, Unbelievable."

Contribution thus far has one thinking he is 'wutless' as a minister of finance.

Slinging mud and hoping something sticks is all the PLP quartet can do now ................... Martin's observation about KPT having an interest in SKYBahamas and dropping customs rates on airline repair equipment is a longshot to have him incriminated for conflict of interest ................. We are still waiting on Martin to tell us about our money that went missing at the Post Office and Road Traffic

Unfreakingbelievable!! He said this in the HOA? On record??

This issue is more political/procedural than substantive. That being said, in my view this appear to be an honest oversight, however, it should put all government ministers on notice to be more diligent in following established disclosure protocols. The corrupt PLP should be the last persons on earth to raise these types of issues. Mr. Turnquest's interest had been publicly declared and disclosed unlike the many and varied backdoor undeclared PLP deals. The larger and more substantive issue is why the FNM government did not have its own budget prepared and ready when they won the government or have any plan at all for that matter. They now appear to be putting forth a PLP budget based on forecasting from an election year. This is not the most efficient way to jump-start a change agenda.