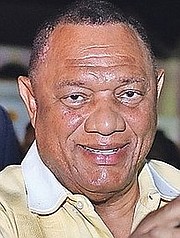 THE Court of Appeal has ruled there were no prospects of success for former Prime Minister Perry Christie's application for leave to begin appellate proceedings into a judge's decision not to recuse herself from judicial review cases involving construction works at Nygard Cay.

Four months ago, in March, attorneys for Mr Christie, who was also then minister for Crown land, argued that Justice Rhonda Bain should have recused herself because she had an application before him in which she sought to extend her tenure as a Supreme Court judge. She could not be perceived as impartial because of this, the attorneys claimed.

Justices Jon Isaacs, Stella Crane-Scott and Roy Jones unanimously agreed to reject the application and indicated that written reasons would follow at a later date.

In a 14-page judgment handed down this week, Justice Isaacs explained that the "legal test for recusal is well known and not in dispute."

"The question is whether the circumstances would lead a fair-minded and informed observer to conclude that there was a real possibility that the tribunal was biased. On the issues of prospect of success and point of law of general public importance, we have considered the case of Bolkiah v State of Brunei [2008] 2 LRC 196 (PC), and see no difference in the allegation of apparent bias made in Bolkiah and the present case. As such, we can see no reason why we should depart from the decision of the Privy Council expressed at paragraph 21. We are similarly unpersuaded that the intended appellant has any prospect of succeeding on the basis of the submission argued before the judge, to wit, apparent bias. This is sufficient, in our view, to show that grounds 1, 2 and 4 have little prospect of success.

"There has been nothing shown in this case that suggests there is some novel point of law to be argued or some principle of law to be clarified by the court for the future guidance of courts below or lawyers. Further, there are no 'questions of great public interest or questions of general policy, or where authority binding on the Court of Appeal may call for reconsideration.'

"Complaint was made by the intended appellant that Justice Bain found he had been guilty of delay in making his application in circumstances where it is unknown if or when her application for an extension came to his attention. It is well established law that a bias challenge must be made sooner rather than later.

"Notwithstanding the lack of information as to when the application came to the attention of the intended appellant, we are prepared to conclude the issue of delay on the averment of Mr (Ryszard) Humes and to treat as a neutral factor the effluxion of time. Thus, we make no finding on the issue of delay adverse to the intended appellant; nor do we treat with it as a matter of concern on this application."

At January's opening ceremony for the new legal year, Chief Justice Sir Hartman Longley announced that he and Justice Bain would reach the mandatory retirement age in February and April this year respectively.

Justice Roger Gomez, who requested and was given a two-month extension in November 2016 also retired from the bench on January 25.

On February 8, a statement issued by the Cabinet Office noted that in accordance with Article 96 (1) of the Constitution, Governor-General Dame Marguerite Pindling, acting on the recommendation of Prime Minister Perry Christie, after consultation with then Leader of the Opposition Loretta Butler-Turner, extended Sir Hartman's appointment.

There was no mention of Justice Bain's application in the communication at the time.

A day before, Justice Bain had dismissed Mr Christie's "no merit" recusal application which argued that she, while awaiting an approval of her application to extend her tenure as a Supreme Court judge, cannot be perceived to be impartial in hearing an ongoing judicial review into allegations that Lyford Cay resident Peter Nygard illegally increased the size of his property.

Attorneys for Mr Christie filed a motion in the Supreme Court on January 26 asking that Justice Bain recuse herself from the judicial review - or any other cases in which he was a party - on the basis that she was about to attain the legal age for retirement in April.

The motion was filed by Mr Christie's lawyers in his capacity as minister responsible for Crown land and was argued on January 30.

In her 40-page ruling on the recusal, Justice Bain reminded Mr Christie of the independence of the judiciary from the executive, stressing cases are distributed by the chief justice - a role that cannot be "usurped by the prime minister."

On April 24, Justice Bain had her tenure extended for another year.

The legal bills in this frivolous matter brought to the court by Christie should be paid by Christie himself (personally) and not by the taxpayers of our country!

It was a stupid appeal. Typical perry crap. So glad that traitor will never see office again....