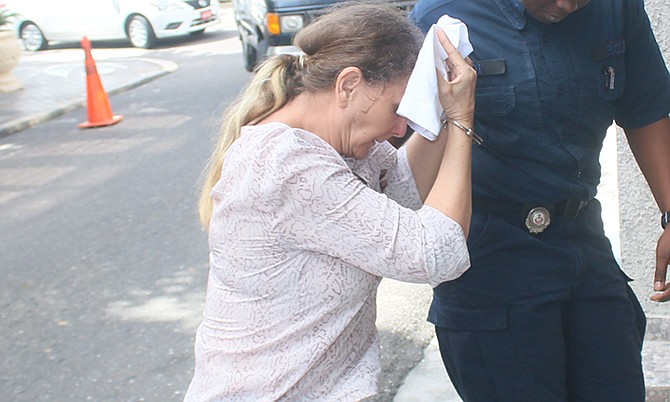 THE Court of Appeal yesterday ordered a retrial for Donna Vasyli, who was convicted of the 2015 stabbing death of her millionaire husband.

Vasyli, 56, made a return appearance before the Court of Appeal a year after her substantive hearing on her challenge to the jury’s verdict concerning the March 24, 2015 murder of her Australian podiatrist husband, Phillip Vasyli, pictured right.

Vasyli’s lead lawyer, Clare Montgomery, QC, previously argued last July, among other grounds of appeal, that the absence of evidence of her client’s good character during trial might have negatively influenced a jury’s unanimous guilty verdict against her.

She said her client was denied the benefit of having evidence of her good character presented prior to her conviction, which she said amounted to “breach of duty” on the part of counsel for the accused.

Mrs Montgomery submitted that had counsel ensured evidence of her client’s good character was led in court, it would have suggested Vasyli likely did not have the propensity to murder her husband, and consequently might have resulted in a different verdict from the jury.

Director of Public Prosecutions Garvin Gaskin countered not only was ineptitude or negligence a non-issue at Vasyli’s trial, but stressed there is no duty on the trial judge to raise or direct on the issue.

He added that as Vasyli’s lawyers did not supply the jury with evidence of good character during their defence, it was not an issue for the judge to give a direction to the jury.

The Court of Appeal yesterday quashed the Australian widow’s conviction and remitted the case back to the Supreme Court, citing that this was in the interest of justice.

In the 71-page judgment that was handed down, Court of Appeal President Justice Dame Anita Allen explained what led the panel to the conclusion that a retrial was necessary.

“Before the jury was evidence that the appellant told the police on one occasion that the clothing she had on that evening was the clothing she wore at her daughter’s house (blue nightdress and white robe); and on another occasion told them she wore a pink and white Bahama Handprint outfit that evening. The evidence also was that a multi-coloured dress found in her daughter’s closet had the deceased’s blood on it, with no explanation as to how the blood got there. Therefore, we have the appellant purporting to have worn two different outfits that evening, none of which include the multicoloured dress the Crown suggests she wore and then placed in the closet at the Lilypond, and the evidence of the appellant that the surveillance cameras at the house were not working.

“Indeed, if the jury accepted that the recorded footage was from the house; that it was the appellant on the tape; and that she did not have on either a blue night dress and white robe, or a pink and white Bahama Handprint outfit as she told the police, it would be evidence from which the jury could infer that the appellant lied about the clothing she wore that night; and about the functionality of the cameras as well. Notwithstanding the prosecution’s evidence in this regard, the defence did not challenge or provide a reason for the alleged lies, and in those circumstances, the jury was possibly left with the impression, as suggested by Counsel for the prosecution, that the appellant lied about her clothing and the functionality of the cameras to conceal the murder of her husband. Consequently, given the reference to it by the Crown in its closing address; and the reliance by them on the lies of the appellant as proof of guilt, there was clearly a danger that the jury might regard the lies of the appellant as probative of her guilt.

“These circumstances ought to have attracted a Lucas direction by the learned judge on the significance of lies; and there is no doubt that he was under a duty to so direct the jury. In my view, his failure to do so was an irregularity which substantially affected the merits of the case; and I would remit the matter for retrial to the Supreme Court on the authority of Reid v R (1978) 27 WIR 254.

“As to the need for a good character direction, I agree with (Justice Jon) Isaacs that such a direction need not have been given by the trial judge for the reasons stated by him,” Dame Anita’s judgment added.

“She says that in the circumstances of this case, a good character direction was clearly material as it impacted upon the issue of her credibility and propensity to commit such an offence. Having reviewed the law it was determined that a good character direction need not have been given by the judge inasmuch as such evidence as was led in the trial ‘demonstrated nothing more than the quality of a relationship’ and did not raise directly or inferentially the good character issue.

With respect to whether there should be a retrial, “the interest of the public in the Bahamas that those persons who are guilty of serious crimes should be brought to justice and should not escape it merely because of some technical blunder by the judge, as in this case where the judge did not leave manslaughter as a possible verdict for the jury to consider, leads me to conclude that an order for a retrial would be in the interests of justice; and would not, in my view, amount to an error of principle in the exercise of the power under Section 13(2) of the Court of Appeal Act,” Justice Isaacs continued.

Justice Crane-Scott dissented on the necessity of a retrial however.

She noted that the appellant “was charged with the murder of her husband in circumstances where there were no eye witnesses to the deceased’s killing, the time of death was not established and the prosecution case was wholly circumstantial.”

She also noted: “Put slightly differently, and given the inconclusive state of the circumstantial evidence, I am unable to say that a jury properly directed, in relation to both the credibility and propensity limbs of the appellant’s good character, would inevitably have returned the same verdict. In short, in the absence of the good character direction, the appellant’s conviction cannot be regarded as safe.

“In my view, the judge incorrectly approached the task which lay before him on the no-case submission, choosing instead to abdicate the task of evaluating the strength of the evidence and the meaning of unexplained facts, to the jury to decide.

“. . . I am satisfied that despite the seriousness of the offence, the prevalence of murders in this jurisdiction and the interest of persons in this community in knowing that persons who are guilty of serious crimes are brought to justice and should not escape it, the evidence against the appellant is so weak and inconclusive that it is not in the interests of justice to order a new trial and I decline to do so.”

Vasyli was initially convicted in October 2015 of the stabbing death of her husband at their home in the exclusive gated community of Old Fort Bay.

At her trial before Senior Justice Stephen Isaacs, the jury saw Vasyli’s videotaped interview while she was in police custody. During that interrogation, a police officer suggested to the widow that she stabbed her husband for embarrassing her in front of houseguests while he was drunk. She strongly denied the accusation in the presence of her lawyers at the time, Elliot Lockhart, QC, and Judith Whitehead.

During that interview, Vasyli told police her husband had been drinking and fell down the stairs – shattering glass from picture frames along the way – hours before his dead body was found.

She added he was walking around the house looking “disgusting” with his pants hanging down even though she told him guests were coming. However, she said, she did not argue with her husband.

She was subsequently sentenced to 20 years in prison.

With yesterday’s decision by the appellate court to quash her conviction, she can apply for bail ahead of her re-trial.

The full judgment was published on the appellate court’s website.