Your Say: Elections Are Not Won By Chance 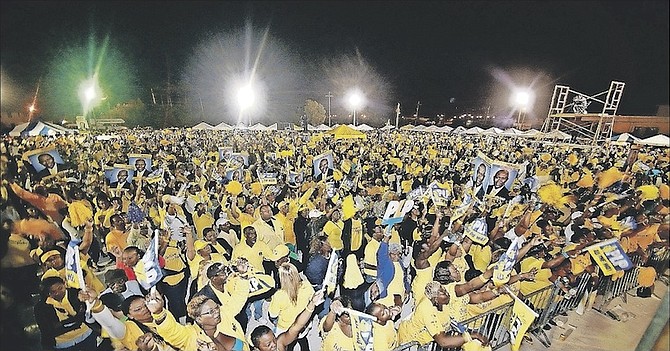 A crowd at a PLP rally during the 2012 election campaign.

By GEORGE A SMITH

“Chance has never yet satisfied the hope of a suffering people. Action, self-reliance, the vision of self and the future have been the only means by which the oppressed have seen and realised the light of their own freedom.” - Marcus Garvey

WITH a general election just a few months away, we are at the dawn of the election season. So, brace yourself to be bombarded with partisan propaganda and visits by candidates seeking your vote, many of whom care very little for you and most of whom you will probably not see again for another five years until they once again solicit your support.

Most of you have been through that before. For those of you who have not, be prepared to be wooed, persuaded and even cajoled into supporting them. Over the next few months, during the campaign, you will receive an unprecedented amount of attention. Enjoy it while it lasts but after the encounter, discuss the real issues with family and friends who have earned your respect. Here’s my take on what we face. The people of The Bahamas, with a history of faith in God and an abiding love for each other and a blessed country, deserve to live in a peaceful society that creates stellar opportunities to improve the quality of life through economic empowerment. They have every right to expect that the affairs of this county, our country are administered economically and effectively by a government constantly striving to make life better for the average citizen.

All Bahamians must become engaged in the national debate on the important issues, the challenges we face as a people and as a nation. We must have conversations wherever we congregate, in the food stores, shops, at the watering-places and after church services. I urge you to have honest and wide-ranging discussions about the future of the country.

Forthright dialogue could only serve the interest of all who live in our Bahamas.

You have heard that the 2017 election will be the most important in our history. It certainly is crucial. Every election is important which is why all Bahamians at 18 and over should register to vote now and actually vote on election day.

The political landscape has never been so confusing, as manifested by the historically dismal low voter registration, at this point, less than 45 per cent of eligible voters.

People are disenchanted, disappointed, disillusioned and, yes, generally disconnected from the political process. There is sufficient resentment for the government, the Official Opposition, the PLP, the FNM and the DNA for each to get their fair share.

The government has failed to live up to its primary pledge to “Believe in Bahamians”. The Minnis-led Opposition failed in its performance in the House of Assembly and is arguably the worst in recent memory. The PLP has failed to ensure that the government remained faithful to many of the party’s campaign promises. The FNM has failed to keep that organisation unified. The fragmentation of the opposition forces is still unfolding and its prospects of forming and maintaining a stable government are dubious.

I firmly believe that the PLP remains the best party to provide the essential national stability and sound leadership in Bahamian affairs but can only do so if it regains the respect, admiration and support of Bahamians.

The government must address public concerns about several vital matters. Among them are, how monies collected on VAT have been spent and will be spent, allegations of malfeasance, fiscal mismanagement, abuse in various governmental agencies and plaguing allegations of high level corruption.

The PLP must present a slate of candidates rooted in the core principles of the party and dedicated to the service of all Bahamians, not only to the privileged and entitled. The PLP must have a comprehensive understanding of the issues facing The Bahamas. It must also demonstrate a deep appreciation of the need for economic recovery and growth and more importantly, must articulate what must be done to achieve these objectives. The party must also demonstrate that it possesses the imagination, an enlightened vision for the future and an engaging ability to attract support in order to get the best result and benefits for the Bahamian people.

It falls to the PLP to shoulder the burden of not leaving the results of the election to chance. The stakes are just too high to leave it to chance.

The PLP must convince the Bahamian people that it is truly committed to promoting a progressive society that cares for its aged, poor, and infirmed and for a caring society that treasures its youth by nurturing and educating them so that they would be productive citizens.

The PLP must protect and strengthen National Insurance and introduce a realistically affordable and comprehensively workable national health insurance scheme. The PLP must reject any suggestion of increasing VAT beyond the current 7.5 per cent. The PLP must commit to making public lands available to deserving Bahamians and simultaneously promote a wholesome awareness of the importance of the environment to the quality of life.

The interests of Bahamians must always be at the centre of government policies and decisions.

If the PLP reaches out to that great reservoir of Bahamian talent available to assist and reconnect with the people, it can again be the party that lifts our sights to a new horizon and elevates our hopes for a better tomorrow.

In 1953, the PLP pledged its unwavering commitment to serve the Bahamian people who have vitally contributed to its many successes over the years. The PLP must again prove its worthiness over the other political parties. And it must be done to the people’s satisfaction.

We must continue to demonstrate and believe that for The Bahamas, our best days are ahead of us, and that together we can make it so. We can do this by appealing to the patriotism and the better nature of the enduring Bahamian spirit.

• George Smith is a former Progressive Liberal Party member of Parliament for Exuma and a former Cabinet minister.

Chance???? of course not elections are won by taking foreigners money converting it into cheap tshirts (made in the USA) and $20 dollar bills for inside each tshirt..... that's how elections are won just ask perry and bradley.